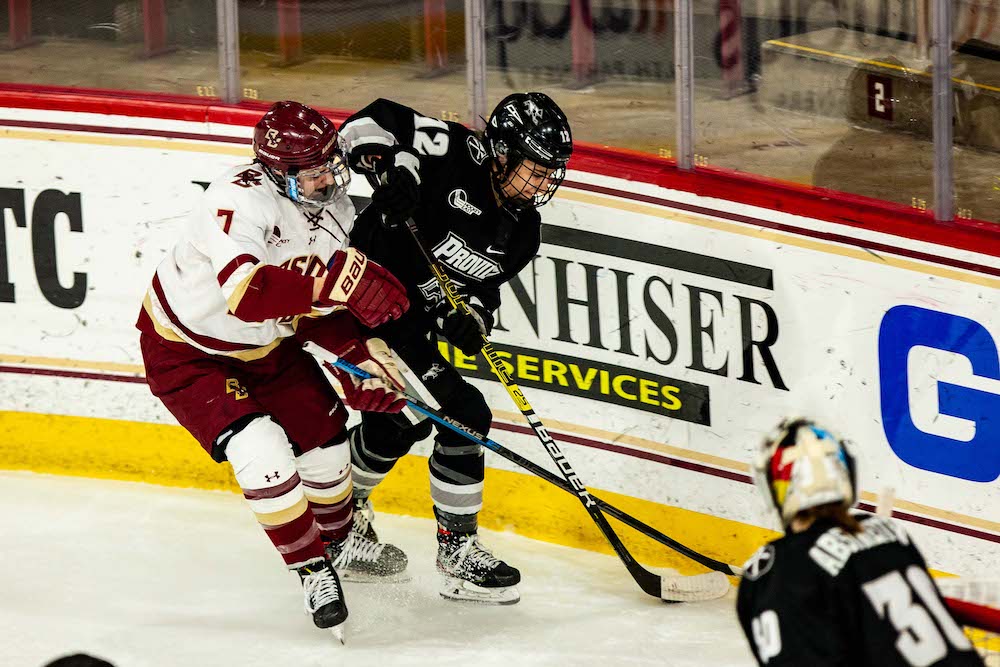 Fey, Agnew Lead BC Over Providence

In its previous contest, Boston College women’s hockey failed to score during overtime in a 2-2 tie against the University of Vermont, but Friday’s matchup against Providence marked a change in fortunes for the currently unranked Eagles. After heading into overtime tied at one, the Eagles sealed a win on a goal by sophomore Jillian Fey just over a minute into the extra frame.

Friday’s game marked the second of three contests between the Eagles (13-9-3, 12-7-2 Hockey East) and Friars (13-10-2, 10-8-0) this season, with the third and final matchup coming on Saturday in Rhode Island. This pivotal overtime victory gave the Eagles a 2-0 advantage in the season series, which may end up being crucial come tournament time.

The first period of the matchup was rather quiet. It took about four minutes for either team to notch the first shot on goal, which was easily saved by BC goaltender Maddy McArthur. Both sides played strong defense, blocking several shots and cutting passing lanes, all while staying out of the penalty box, an area in which BC has struggled this season.

The Friars’ offense began to pick up speed in the latter half of the opening frame. McArthur made a few key stops, headlined by her save on the wrist shot of Providence forward Meaghan Rickard, who was flying down the ice on a breakaway. McArthur, the sophomore netminder, finished the period with six saves and no goals allowed.

BC was finally able to break the ice with only 1:40 remaining in the period. Eagles captain Lindsay Agnew banked a wrist shot from behind the goal off the side of Providence goalie Sandra Abstreiter and into the back of the net to give the Eagles the 1-0 advantage. It was a much-needed break for an Eagles’ offense that has struggled to score early on in their recent stretch of games. Junior forward Maegan Beres was credited with the assist on Agnew’s sixth goal of the season.

“We’ve been talking about shooting when it’s unexpected, and I think Lindsay did that there,” said head coach Katie Crowley. “She put it to the net. It wasn’t expected, and it kinda snuck in for us. It’s nice to get one of those and put your team up there in the first period. It gave us a little bit of energy there.”

The second period opened up much differently than the first, with the Friars generating several scoring chances right off the bat. Providence finally got the best of McArthur about nine minutes into the period, when Friars’ forward Isabelle Hardy flew down the ice past the Eagles’ defenders and found herself face to face with McArthur. McArthur was able to stop her initial shot, but Hardy followed through and scored on her own rebound to level the score.

The Eagles’ greatest scoring chance to pull ahead came in the final minute of the frame.  Agnew rocketed a shot past Abstreiter, but she was denied by the post, which kept the score level at one. Despite this opportunity and other scoring chances, particularly for freshman Hannah Bilka, the score remained 1-1 going into the second intermission.

The third period was particularly uneventful for the first 10 minutes. About 10 minutes into the frame, however, BC took the first penalty of the game when Deirdre Mullowney was called for interference. Right after the Eagles killed off the penalty, another Eagles defenseman went to the box, as Cayla Barnes was assigned two minutes for boarding. McArthur stood tall in her goal, not allowing Providence to take the lead despite four consecutive minutes of power play time.

“On the penalty kill, your goalie is always your best penalty killer,” said Crowley. “Maddy did a great job today piggybacking off of her game last weekend.”

Despite the man-advantage for Providence, neither team capitalized, and the game went into overtime. All it took was one minute for the Eagles to win the game on Fey’s first goal of the season. Kate Annese wristed a shot on goal that Abstreiter fought off, and the rebound fell right to Fey, who made no mistake with her opportunity.

“I think Lindsay Agnew started the breakout,” Fey said. “I saw some ice ahead of me, so I just wanted to go with the puck. She took it down the wall. I think she passed it to Kate Annese, who was able to get a shot off. I still had a lane to the net and the puck popped right out, and I was able to put it in. I think we have a lot more coming this season, so that’s exciting.”

In what has been a difficult stretch of play lately for the Eagles, this win will prove to be huge for morale. They will head to Rhode Island on Saturday looking to shut down the Friars’ offense yet again and sweep the season series.