It’s easy to make a bad movie. There are many pompous, self-absorbed actors who show up to work and go through the motions in a cheesy slapstick action-flick or deliver hollow lines in cheaply made rom-coms. Some are simply there to collect their paycheck. But other actors are there because they can’t do anything else, because they believe in the power of performance, because they have dedicated their life to their craft. Actors like Ethan Hawke.

I first saw Hawke in Dead Poets Society on an outdated projector screen in my English class sophomore year of high school. For the teacher, it was a way to kill a couple of class periods before discussing books that no one had read. For the other students, it was a relaxing three-day vacation from mental exertion that allowed them to finally win the game 2048. For me, it was my first introduction to an actor with an honest and admirable work ethic. It was a moment that still shapes how I watch movies and critique the merit of performances.

Hawke was only a teenager when he appeared in the film that chronicles the arrival of English teacher John Keating (Robin Williams) to a competitive, conservative preparatory school in New England. Keating encourages the students to be creative and express themselves, to break free from the mundane routines of the boarding school.

Hawke is captivating in his role as Todd Anderson. The character starts off as an introverted, shy student, and Hawke conveys a deep, mature understanding of his transformation into a confident, expressive individual. Whereas child actors often display potential, Hawke displays perfection. Even at a young age, he had the right stuff.

After such early success, he could have rested on his laurels and basked in the limelight. And who could blame him? But instead, he hunkered down and worked to master his craft, performing in films that stretched across a variety of genres, honing his experience. The perfect example of a professional, Hawke has never stopped seeking new opportunities and new roles. He even recently played a priest in the chilling film First Reformed that examines topics as pressing as the global climate crisis.

From all of his work, the performance that speaks to me most is Hawke’s role in Boyhood. Teaming up with a fellow Texas native—director Richard Linklater—Hawke plays a role so subtle and nuanced that you forget he is even there. Filmed over the course of 12 years, the film represents Hawke’s remarkable commitment to the art of performance.

What awed me most about Hawke’s performance in Boyhood, however, was his portrayal of flawed humanity. He plays a flighty dad, Mason, who clearly loves his children yet isn’t always present in their lives. He imbues an incredible amount of warmth into his character. His uncertain, tense conversations with his wife Olivia (Patricia Arquette) belie a tender love and compassion simmering beneath the surface yet unsure of how to manifest themselves.

Hawke doesn’t have any singular defining moment or speech in Boyhood that sums up his character. Instead, with Linklater’s help, he builds his character up through carefully written dialogue that appears off-the-cuff yet is deeply meaningful in its essence.

After we’ve been introduced to Mason, his exploits in the Alaskan wilderness, and the many mistakes that lead to his divorce with Olivia, we see him reunite with his children. In one scene that takes place in a bowling alley, Hawke sits casually on the floor. Full of youth and vigor in appearance, yet burdened with the wisdom of old age, he tells his son after he rolls a gutter ball, “You don’t want bumpers. Life doesn’t give you bumpers.” It is a line delivered effortlessly, yet the subtext and references to other aspects of his character are so powerful.

Plainly stated, Hawke doesn’t seek the spotlight in his films. He lets out some line, sits, and waits. Eventually, he feels a small tug and nonchalantly begins to reel the catch in, slowly and with care. He doesn’t reach for a defining career moment or melodramatic monologue—he is open and receptive to the other actors he is working with and how their characters are affecting the emotions and inner lives of his. In an industry rife with pseudo-artistic imposters, Hawke waits patiently for his moment and demonstrates incredible care with his characters, who are manifestations of his own artistic expression rather than grabs for money and accolades.

Hawke’s artistic integrity is the most impressive part of his pedigree. Time and time again, he has selected films based on their merit, whether it be Linklater’s Before trilogy or Antoine Fuqua’s Training Day. Shunning the trappings of celebrity, Hawke, in his acting, becomes all the more engrossing as you become lost in his roles. Despite his exclusion by many from the vanguard of acting’s elite, he is one of the finest, most honest actors of our generation. My sophomore English class missed out.

ethan hawke
Eagles Upset in OT by Maine for the Second Night in a Row
iEdit: Maggie DiPatri Plays Moody Tunes on Repeat 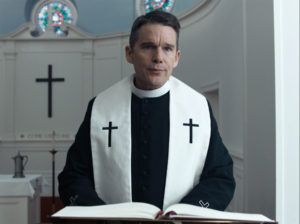