For the past few months, the art, art history, and film department at Boston College has been searching for a new assistant professor to specialize in the study of modern and contemporary art. This ongoing search has boiled down to three finalists: Kevin Lotery, Lindsay Caplan, and Jennifer Sichel, all of whom have been asked to give a public lecture for the BC community on a topic of their choice, so long as it falls in the realm of modern or contemporary art. These lectures are supplemented by meetings where students and faculty can get to know the three candidates, ask them questions, and offer their opinions to the department heads.

This series of mini-lectures and meet-and-greet sessions kicked off this Thursday with a presentation by Kevin Lotery titled “No Home Movies: Chantal Akerman, Claude Lanzmann, and the Last Ones.” Lotery is a lecturer in the School of Arts and Cultures at Newcastle University. He received a bachelor’s degree in art history from Columbia University and a doctorate from Harvard University. He was also a Mellon Postdoctoral fellow and lecturer at Columbia University.

Lotery’s research focuses on cross-disciplinary art and collaborative exhibitions. This type of research is the topic of his first book, The Long Front of Culture: the Independent Group and Exhibition Design, which is distributed by the MIT Press and studies the 1950s British research and art collaboration known as the Independent Group. Lotery’s lecture on Thursday centered around his upcoming book, which brings forth new research and is partially meant as a follow-up to The Long Front of Culture.

The lecture was split up into four sections. The first, titled “The Dinosaur,” focused on the Holocuast documentary films of Claude Lanzmann, mainly The Last of the Unjust, Shoah, and Shoah: The Four Sisters. Each film is connected in the sense that they follow the themes of survival and resistance. But each has a different central subject: an aging Rabbi; Polish concentration camp survivors, witnesses, and perpetrators; and four female Holocaust survivors who are strangers to each other. Lotery looked at each of these films as a way of presenting what it means to be at the end of one’s life.

In the second section, “The Truth about Sancho Panza,” Lotery referenced a Franz Kafka quote that reframes the humble sidekick, Sancho Panza, as the main protagonist of Don Quixote who feeds the hero stories of romance and adventure. This life of deception, however, can never transcend reality, so the protagonist is forced to tell stories forever to keep the illusion alive. Lotery said that this same idea could be applied to the subjects of Lanzmann’s documentaries, who were all forced to change their views of reality and resistance in order to adapt to their situations and survive.

Lotery not only compared Lanzmann’s three films, but he utilized these analyses when studying Chantel Akerman, the subject of the third section, “Sisters.” He compared both of the artists’ last works by exploring the different ways they both seem to invoke a sense of “anticipatory potential” despite being “the last” of their kinds. Akerman’s film No Home Movie also focuses on the Holocaust, but her film follows the last living years of her mother, an Auschwitz survivor. Akerman’s art installation Now could be considered supplementary to the film, as it uses many of the same stills. The installation focuses on the juxtaposition between what is seen and what is heard and “turning emptiness outward.” She contrasted the empty, still scenes presented on translucent moving screens with a hybrid of sounds such as different languages, yelling, machines, and prayers.

“This creates a type of sensory dislocation, a cacophony in which spectators struggle to find a place and time,” Lotery said. “All the sensory data is radically leveled and detached from any type of hierarchy.”

At the end of Lotery’s lecture, he presented a coda titled “Ghosts,” in which he discussed how other modern artists have used similar themes and methods as Lanzmann and Akerman to portray stories focusing on the idea of something coming to an end while simultaneously implying a new beginning. This confusing in-between time implies a certain potential for the future, a blank slate that creates the aesthetic of “nothingness.”

“The emptiness is presented outward, but it reflects a generative potential where an unscripted action might occur,” Lotery said.

Lotery closed his presentation by discussing whether studying the style of “nothingness” could truly be considered art history, since art is all about form and the aesthetic of “nothingness” provides no real form to analyze.

“This is not easily answered, the aesthetic of nothingness,” Lotery said. “As Lanzmann shows, after trauma, aesthetics are not the same. They all have to rethink themselves and the approach to images. It’s impossible. It’s a paradox. What does it mean to deal with the study of images, while withholding images altogether? The aesthetic of nothingness is more interested in paradoxical forms of resistance.” 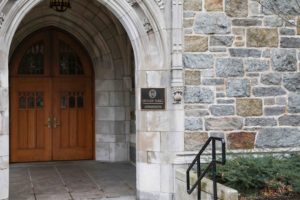