Home » Notebook: Eagles Shut Down by Friars, Unable to Capitalize on Power Plays 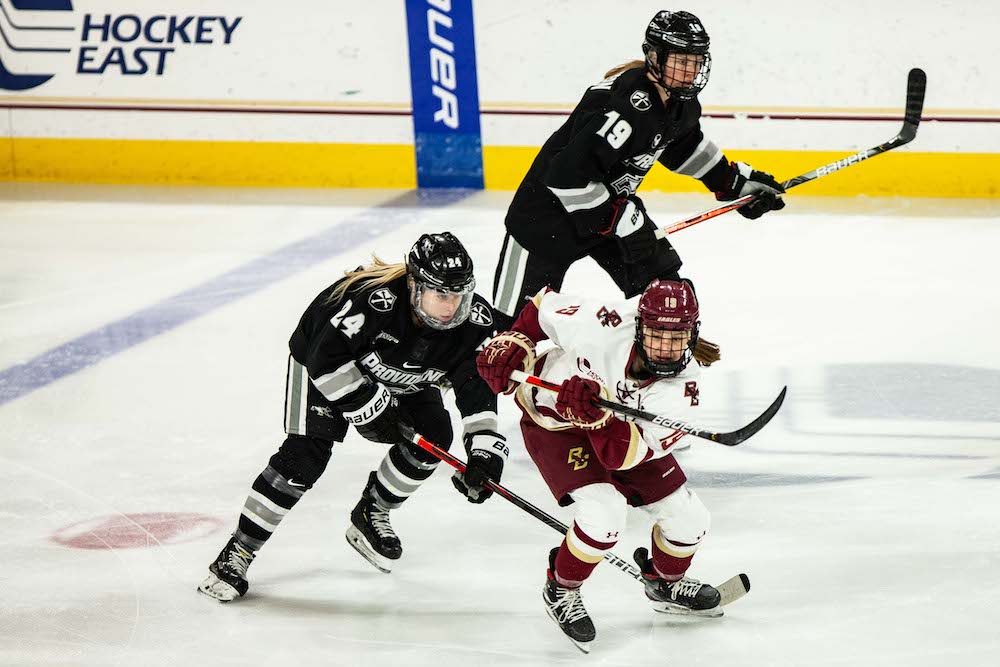 Notebook: Eagles Shut Down by Friars, Unable to Capitalize on Power Plays

Heading into the second period of Saturday’s game, Boston College women’s hockey and Providence seemed to be evenly matched, but it didn’t take long for Providence to run away with the game. In the first, Delaney Belinskas fired a shot through the legs of Sandra Abstreiter to give the Eagles an early lead. But just 15 seconds later, the Friars’ Sara Hjalmarsson beat Maddy McArthur to the post and responded with a goal of her own.

Those were the only times BC was able to beat Abstreiter, as the Eagles eventually fell 5-2. A dominant second period was all it took for the Friars to solidify their win, and for the Eagles, who have struggled lately this season, the loss comes off months of disappointing outcomes.

While the Eagles were able to kill off their three penalties, they needed to capitalize on their power-play opportunities. While they were able to create chances, they were few and far between, which proved deadly. While the Friars clocked in eight shots throughout their power plays, the Eagles only took three shots on Abstreiter during theirs, and with a team that’s had trouble being cohesive lately, those three shots weren’t enough to bounce back.

The second period was where the root of BC’s troubles came from. The Eagles couldn’t connect to find Abstreiter, and when they did, the goaltender was right there to easily block their shots. It didn’t help that the Friars nabbed two of their own goals to pull ahead, and it definitely got to the Eagles. They had more power-play opportunities than the Friars during the period, and while Providence couldn’t connect on its own power plays either, it didn’t need to in order to pull ahead. Shortly after the Friars’ penalty expired, however, Sara Hjalmarsson connected with a rebound off McArthur’s pad and slipped the puck home just as Cayla Barnes’ penalty expired.

While BC was able to kill off its second penalty of the afternoon, Providence again didn’t need the man advantage to add another point to the board. With seconds left in the second period, Isabelle Hardy broke away and closed in on McArthur. She sent the puck to Meaghan Rickard, and the senior was able to deke McArthur and extend the Friars’ lead.

Being down two points isn’t where anyone wants to be to open the final frame, but BC made sure its presence was known and focused on creating opportunities for itself. The Eagles, however, still couldn’t connect on opportunities, and following a third-straight unanswered insurance goal by Ciara Barone, there was no coming back.

It’s no secret that BC has struggled since November, and Saturday afternoon’s series closer was no different. The Eagles couldn’t overcome a goaltender that seemed to know what their strategy was before they attempted a shot. And tough shots for McArthur to block, in turn, amplified the difficulty of the situation. It’s clear BC has to figure out a way to connect in order to close out the season successfully.