Home » ‘Color Out of Space’ is Stellar Example of Cosmic Horror 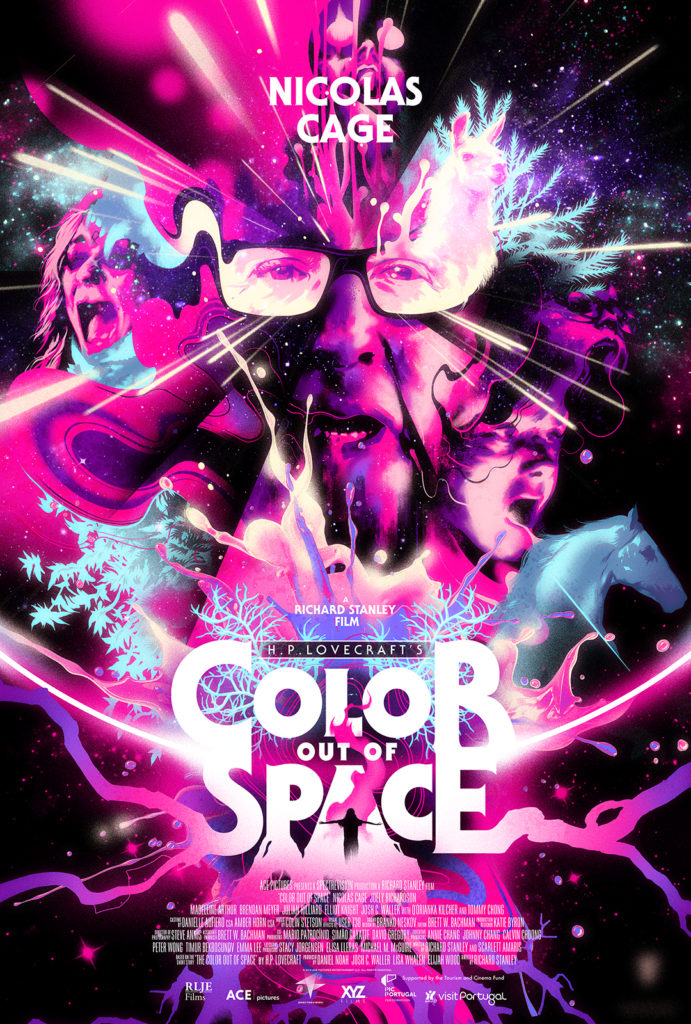 ‘Color Out of Space’ is Stellar Example of Cosmic Horror

After years of the horror movie scene being dominated by supernatural entities and crazed serial killers, the niche genre of cosmic horror seems to be making a proper debut on the big screen, with recent films such as Birdbox, Underwater, and now, Color Out of Space, the latest to join the ranks.

Director Richard Stanley’s last big project was supposed to be the 1996 sci-fi horror film The Island of Dr. Moreau, but he was fired a week into production. Now, 24 years later, Stanley is evidently taking another stab at sci-fi horror with Color Out of Space. Based on H.P. Lovecraft’s story of the same name, the film follows a family’s spiral into madness when a mysterious meteorite bearing an alien entity crashes onto its farm.

Cosmic horror can be a particularly hard genre to pull off cinematically because the suspense relies on what is shown to—or withheld from—the audience. Much of the tension comes from what remains unseen and unknown, which is at odds with the Hollywood norm of spending millions of dollars on flashy special effects. Additionally, the villains of cosmic horror are usually so powerful and beyond human comprehension that they inevitably end up defeating the protagonists, a rare occurrence in today’s blockbusters.

Thankfully, Color Out of Space sticks to what makes the genre unique and refuses to abide by Hollywood rules, instead remaining faithful to Lovecraft’s key principles. In trying to understand the mysterious entities that inhabit the universe, mankind will ultimately succumb to madness, the fate that befalls the Gardner family.

Nicholas Cage is known as much for his great performances as his terrible ones. Here, Cage luckily falls into the former category, effortlessly pulling off his role as Nathan Gardner, an everyman farmer. Cage shares the spotlight with Madeleine Arthur, who plays Nathan’s daughter Lavinia. Arthur captures the uniquely idiosyncratic personality of the occult-obsessed Lavinia with enthusiasm.

As he begins to succumb to madness, Cage’s character undergoes a radical transformation. Audiences may find Cage’s way of displaying this change a bit jarring, and they could possibly be torn out of an otherwise engrossing movie in certain scenes, although such instances are few and far between.

Cinematographer Steve Annis uses unorthodox and out-of-sync shots to disorient the viewer in the same way that the alien disorients the family. The score, composed by Colin Stetson, also lends to this unsettling effect as it imperceptibly fades in and out of scenes, leaving audiences unsure whether it’s even present underneath the background noise of the film. These unnerving choices capture the building insanity of the Gardner family.

The film pays close attention to detail, with Annis’ cinematography helping to draw the audience’s attention to the subtle details of the movie’s changing landscape. Color Out of Space is meant to be the first film in a trilogy set in a Lovecraftian cinematic universe, and as such, there are references to towns such as Arkham and Dunwich, which appear in many of Lovecraft’s works. There are many such subtle Easter eggs and references to other works by both Lovecraft and Stanley. Unlike many other attempts to set up an interconnected universe, Color Out of Space avoids the pitfall of first and foremost setting up the universe, and instead focuses on laying out a compelling narrative with only hints of a wider potential universe.

Color Out of Space is a tense and well-crafted film that will leave audiences disturbed long after they’ve left the theater. It’s a fine example of cosmic horror on the big screen once again done right.