That’s the third time I’ve heard that sentence—or some variation of it—in the last three hours. Within the past 24 hours, I’ve had one flight canceled and more delays than I’d like to count. I’m more than ready to get home before I have to leave the country.

I’ve gone as deep as I could into the States, amid great plains and chocolate shakes. By the time you read this, though, I’ll have already landed in Italy and be lost in the land of pasta, listening to a language I never learned.

In three days, I’ll be leaving to study abroad. Today, though, I’ve been fighting to get on an hour-long flight just to leave Kansas City. I’ve made my way to the middle of America, and it doesn’t want me to leave.

More than anything, when I was deciding where to go to college, I knew that I would be studying abroad. When I sent my application to the Office of International Programs (OIP), the process was a little different than it is now: I was to list my top three programs and note which semester I wanted to apply for. One of the three choices had to be for fall semester. This initial application, while a little stress-inducing, was no problem for me. While I didn’t know when or where I’d be studying abroad, I was excited to apply.

The hard part, if you ask me, comes in after that. After you get your placement, there’s a bit of a lull, which is much longer if you’re going in the spring semester. After that, you’re on your own to actually apply to the program, and it’s a mad dash to gather all of the documentation for your student visa. OIP offers batch processing for visas, meaning you gather all of your documentation that’s necessary for the process, turn it into your advisor, and he or she sends a large group of visa applications to the consulate of whatever country you’ll be going to for approval. It is immensely helpful—if you have the opportunity to do that, I’d suggest you take advantage. It’ll save you two trips to the consulate, and they’re not always in the most convenient of locations. It’s a complicated process, however, so even with that extra hand, it’s really up to you to figure out what you need and how to get it. It’s an application that requires a lot of random documentation, and your flight information, so you’ll want to start early—sometime when you’re home—before you go. And as surface level as this seems, the fact that BC has fully updated its entire website makes it much easier to find the web resources that OIP provides.

While the University has said that the application process for the 2019-2020 academic year was largely successful, the fact that it denied any students at all from all of the programs it listed is unreasonable. Being asked to choose from the leftover programs would be an immense disappointment for any student. This year, hopefully the adjustments OIP made to the application process will ensure that students at least are placed in a program that they initially expressed interest in. If OIP is going to continue deciding for students which program they must apply to, then they ought to give students the space to designate a selection that they are actually considering.

I was fortunate that OIP approved my first choice. Still, I wasn’t completely committed to where I wanted to go. My focus was merely on going abroad. I could’ve been placed anywhere, and I would have been all right.

That’s not the case for everyone—many students are hell-bent on a particular place or program. While such strong conviction has value under other circumstances, OIP’s ultimate jurisdiction over which program one can even apply to sets students who have that mindset up for disappointment. I’m not suggesting that you shouldn’t care where you go. I am suggesting that you be flexible and take control of the only thing you can control in this situation, which is just the way you handle it.

With no intention whatsoever to be cliché—but failing miserably—everyone faces their own obstacles at school, and this doesn’t change during the abroad process. Whether a student’s greatest worry is academic eligibility, placement, social anxiety in a foreign environment, financial ability, or what have you, everyone struggles with the abroad process in one facet or another.

I’m not intending to speak for all students who have gone abroad. This is my experience with OIP, and maybe you’ll find things to relate to, but maybe you won’t. Maybe you’ll read something, a little thing, that’ll make you pause. Maybe that second will cause you to really consider, compare, relate, deny, worry a little less. Just for a second, take a step back and look from a different perspective. It’s hard to accept that the whole semester is more or less decided for you. Yes, they’ll consider your opinion, but in the grand scheme of it, it’s out of your hands.

This is easy for me to say, so far gone from the application process. But even the toughest of times were worth it. At this point, I’m ready to go—excited to be on my way to another country, nervous to make friends, and sad that I’ll be away from everything that BC is to me.

All I’m trying to say is that you can’t anticipate everything—believe me. I didn’t expect to spend 12 of the last 24 hours in an airport, but I’ll make it out. I finished reading a book, called my bank, wrote this column. These things all would have been done at some point, and—after that initial wave of chaos, dread, and immense self-pity—I tried my best to use this time to my advantage. Sitting at a number of gates in Kansas City’s airport for so long drove me insane enough to finally have a moment of clarity.

Sometimes life throws things your way that you certainly didn’t want. Maybe OIP will too. But if you really want to go abroad, you have to deal with it. Be adaptable. You’ll take one step forward with the application only to be thrown 10 steps back. You’ll be ready for takeoff, and they’ll delay your flight an hour, then a couple hours, then a couple more. It might throw a wrench in your plans, but you’ll get to where you need to go.

abroad OIP europe flight
To be Pro-Life, Be Pro-Climate
The Final Answer: How to Stick Butter to a Ceiling 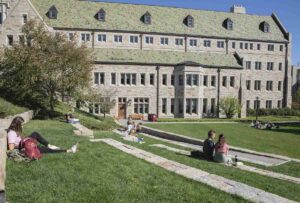