FBI Special Agent Jeffrey Wood visited Boston College to deliver a lecture concerning his 20 years as a field agent. Wood, a frequent guest speaker on BC’s campus, specializes in gang violence, and his lecture focused primarily on how the FBI has approached the growing threat of gang activities.

Wood first presented figures regarding the growth of gang activities in recent decades. He pointed out that the number of known gangs has grown from 5,000 to 33,000 from 1981 to 2020 and the number of identified gang members has grown from 250,000 to 1,400,000. Wood emphasized that since most gang members refuse to testify in court, it is difficult for law enforcement agencies to identify all members of a gang. They often resort to using key characteristics, such as tattoos and clothing style, to infer potential gang membership, as most gangs have their own color themes and matching tattoos.

“It’s legal to be a member of a gang,” Wood said. “It’s what people do in the gang that makes things illegal.”

Gangs most commonly engage in drug or weapon dealings, Wood said. Aside from the illegal nature of these dealings, Wood demonstrated how violent these exchanges could be by showing a video footage of a drug deal quickly turning into an armed robbery.

Additionally, many violent conflicts among gangs originate from disputes over drug-dealing territories, Wood said. Gangs not only are often violent toward outsiders, but they also inflict pain and fear on their own members.

“A lot of gangs are ‘blood in, blood out,’” Wood said. “Sometimes that flat out means you’re going to be killed if you leave the gang.”

Most gang members are between the ages of 10 to 25, Wood said. He listed peer pressure, sense of family and protection, lack of opportunities, and desire for power and wealth as the primary reasons young people—of all genders and socioeconomic backgrounds—are attracted to gangs.

One aspect of Wood’s job as an agent is to approach detained or hospitalized gang members and attempt to convince them to be undercover sources. The key to set up a successful source, according to Wood, is to reveal the lies behind what the gangs promise their members. Wood’s job is to show the members that rather than being a valued part of a family, they are just disposable chess pieces to the gang authorities.

“For us, understanding why they joined the gang helps us get to the point of dismantling the gang,” Wood said.

In the recent decade, many major cities in the United States have faced the threat of MS-13, a Salvadoran gang known for extremely violent behaviors. MS-13’s initiation process requires the inductee to commit a murder. The gang’s members patrol their territories and attack members of rival gangs, Wood said.

Wood said the city of Boston had been infested with MS-13 members, but he and his team gang were able to successfully infiltrate and greatly weaken the violent gang. Roughly 60 members were indicted, among whom were notable MS-13 leaders such as Joel “Animal” Martinez.

“Our success in this case was the fact that we worked together with different departments as a task force,” Wood said. “MS-13 is an international organization, so we ended up working with tasks forces in North Carolina, Houston, and L.A. We worked together.” 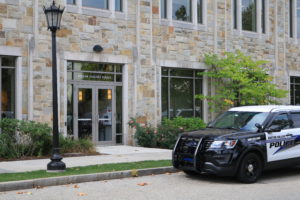