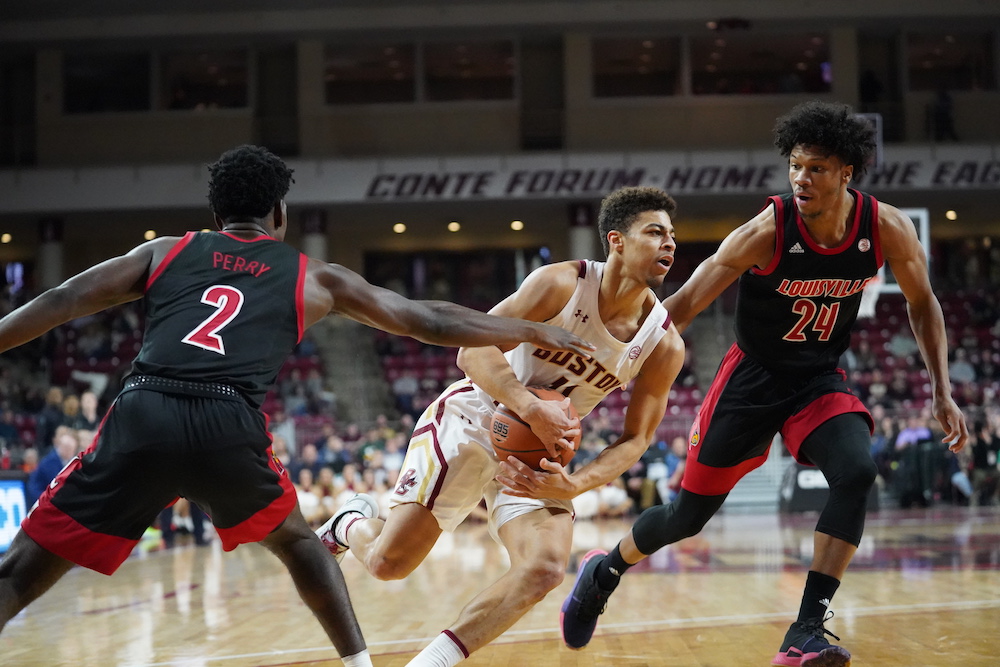 Louisville’s Nwora Leads Charge Over BC

As the first-half clock wound down, a strong physical presence from Boston College men’s basketball under the rim resulted in two quick free-throw buckets from Jared Hamilton. His two points were enough to bring the contest within two going into the locker room. At that point, the game was well within reach for the Eagles.

The Eagles (10-11, 4-6 Atlantic Coast) could not put another upset together despite flying high off their win over Virginia Tech less than a week prior. A few missed opportunities from BC in the paint followed by a lack of effective ball movement late in the second half fueled a 14-2 run for the Cardinals. Louisville’s run near the end of the contest was enough to bury the Eagles by a final score of 86-69.

Conte Forum was on its feet throughout the game, as the scoreboard rarely tilted too far in favor of the No. 6 Louisville (18-3, 9-1 Atlantic C) for the majority of the contest. The Eagles did not back down from the challenge of facing such a highly ranked squad, putting on a valiant effort in front of a crowd of over 5,000 in their home stadium.

The Eagles wasted no time finding their rhythm after opening tipoff in the matchup, as a hot start gave them an early lead that lasted a good portion of the first frame. A jumper from Jairus Hamilton broke the floodgates open. BC followed up by draining its first three shots from beyond the arc and went 6-for-9 on field-goal attempts during that stretch. Derryck Thornton and Jay Heath paved the way for what was, at one point, a double-digit BC lead during that first half.

The duo of Thornton and Heath found themselves atop the stat sheet for the Eagles, combining for 33 of the team’s points. Wednesday night’s performance proved to be the highest combined scoring total for the two since Dec. 7, proving their worth when their team needed it the most. Jairus Hamilton, who notched a career-high 23 points in the game against Virginia Tech, added 13 more to the scoreboard on Wednesday.

Nonetheless, the lead that Thornton and Heath generated proved to be short lived. Louisville responded with its 14-2 run to take the lead with around six minutes left in the first half. The Eagles clawed their way back, and an 11-6 response over the final four minutes made it a two-point game heading into the break.

That was the closest the Eagles would get to regaining their lead for the rest of the night.

Outside of the first period, BC struggled to find the net. Without hitting a field goal for the first five minutes, BC watched Louisville develop a 57-49 lead. Twice thereafter, the Eagles cut their deficit to five points late into the half, but a fast-paced 14-2 Cardinals’ run over the final minutes of play proved to be the final nail in the coffin.

Despite the final score, the Eagles’ defensive play deserves commendation, as its stingy presence at some points––especially throughout the first frame––resulted in 17 points off turnovers. BC seemed to find success blocking off Louisville’s passing lanes, preventing its offense from generating ball movement throughout much of the game.

That same BC defense was unable to find an answer all night long for the Cardinals’ top scorer, Jordan Nwora. The junior forward netted a career-high 37 points––just two shy of record for an opponent in Conte Forum––along with a final tally of nine rebounds. On every occasion in which it seemed that the Eagles were going to repeat their come-from-behind performance, Nwora was there to extend his team’s lead.

Having lost five of its last six contests, BC is back below the .500 mark. The schedule gets no easier over the next few weeks, as the Eagles will travel to Chapel Hill to face UNC on Saturday before hosting Duke three days later.