The Senate began deliberating the rules that will guide the impeachment trial of President Donald Trump on Jan. 25. Trump’s impeachment has been centered around the allegation that the Trump administration willingly withheld military aid to Ukraine in order to pressure the Ukrainian government to investigate Democratic presidential candidate Joe Biden and his son. The Senate heard arguments from both House managers and Trump’s legal team in regard to Mitch McConnell’s proposed rules for the trial.

While Republicans and the president have claimed on a daily basis that the whole impeachment process has been unfair and nontransparent, in reality, it has been the Trump administration that has attempted in almost every way possible to limit evidence and blocked people from testifying, with Republican senators allowing them to do so. In doing this, they are intentionally hiding potentially damning evidence against Trump that the American public has a right to know.

The Senate majority leader changed a provision in the rules for impeachment, in an attempt to require House prosecutors and Trump’s lawyers to make 24 hours of legal arguments in just two days. Abiding by this provision would have forced arguments to be made after midnight, into the late hours of the night, when a majority of Americans are asleep and unable to watch the trial. While senators from both political sides have advocated for a public impeachment trial, these new proposed rule changes by Republicans have made many Americans—including myself— skeptical about why Republicans may want to keep the trial unavailable to the majority of the public.

After backlash to this rule change, McConnell amended his proposition so both the prosecution and the defense each have up to three days to make their opening arguments, rather than the two-day cap he had earlier proposed. Senator Susan Collins (R – ME), who is up for re-election in 2020, stated her caution with McConnell’s proposed rule changes, arguing the rules for Trump’s impeachment trial should follow the precedent set in the impeachment trial of former President Bill Clinton. The Senate should follow these rules that were established during the Clinton impeachment, because they allow for a fair and unbiased trial. By not allowing for the American public to hear what people with direct knowledge of the phone call made by Trump have to say and denying access to documents that may implicate Trump, a fair trial cannot be conducted.

Another rule change that McConnell proposed would have banned evidence used in the House of Representatives’ investigation into Trump, such as depositions from the U.S. Ambassador to Ukraine Marie Yovanovitch and the U.S. ambassador to the European Union Gordon Sondland. Since the Republicans have a majority in the Senate, Republican senators could have voted to disallow this evidence, but McConnell rolled back on this proposition. While McConnell gave into the complaints from Democrats about blocking evidence submitted by the House, Republican senators continued to find new ways to block new evidence that has not been submitted yet.

On Tuesday, Senate Republicans voted to block a bid by Democrats to subpoena memos, emails, and other documents that may tie Trump and members of the Trump administration to the withholding of military aid to Ukraine. The Trump administration has refused to turn over any documents, even while claiming that it wants a transparent trial and that it has nothing to hide. It is ironic to hear Republicans and people within the Trump administration repeatedly argue that Democrats have failed to reach the burden of proof, because they are the ones who have denied every attempt made by Democrats to gather evidence and information that could prove that Trump used the power of the presidency to benefit himself.

These documents are needed in order to have a fair trial because these communications between members of the administration around the dates of the infamous phone call have a high chance of containing incriminating evidence.

In the coming days, the Senate will vote on whether or not Democrats can call new witnesses to testify in front of the Senate. One witness that Democrats have called to testify is John Bolton, the former U.S. National Security Advisor under the Trump administration. Senate Democrats will need four votes from their Republican colleagues in order to get Bolton to testify. Testimonies from Bolton and others who worked within the Trump administration are necessary to have a fair trial.

Even if four Republican senators vote to approve the resolution to allow new witnesses to testify, it is unlikely that McConnell will allow for these testimonies to be made public—yet another attempt to try to keep the trial hidden from the American public. It is imperative that Bolton testify: Bolton probably has firsthand knowledge of the Trump administration’s effort to force Ukraine to investigate Joe and Hunter Biden, and Bolton has already made it clear that he will testify if he is subpoenaed. It is hard to understand how people can agree with the Republicans’ tactics of repeatedly attempting to keep information about Trump’s conduct regarding Ukraine private. If people actually believed that the president did nothing wrong and does not deserve to be removed from office, why are Republicans not allowing for witnesses to testify? Why are Republicans not granting access to emails and memos from the White House?

While it is unlikely that Republicans will vote to allow Bolton and other new witnesses to testify before the Senate, if Bolton is forced to testify, there is the chance that Trump may assert executive privilege—a power that gives him the ability to conceal information for the “good of the public.”

Invoking executive privilege during an impeachment trial would be unprecedented in American history, so it is difficult to predict how the Senate would deal with this. While I would not be surprised if Trump did invoke executive privilege, I would be concerned about what that decision would mean for future American presidencies. Trump would be setting a very dangerous precedent that would allow for future presidents to abuse their power of office with little repercussions. That is why this whole impeachment trial is so important: It is essential for the well-being of our democracy that the United States demonstrate that no man is above the law, not even the president. 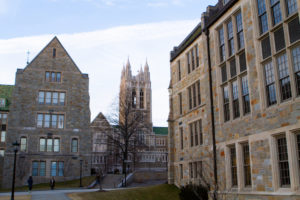