A crowd of students, faculty and staff listened, often snapping in affirmation, as the booming voice of Rev. Willie Bodrick echoed across the walls of the Heights Room in Corcoran Commons. He decried the injustices that he said still plague our society decades after Rev. Martin Luther King, Jr. first proclaimed that he had a dream. At the annual Rev. Dr. Martin Luther King, Jr. Memorial Gathering on Monday night, Bodrick remembered King’s message and implored BC students to keep dreaming like King.

“Remember what you’re facing is what other men and women have met,” Bodrick said. “You may fail, but fall still fighting. Don’t give up whatever you do. Eyes front. Head high to the finish line. See it through.”

The event featured Biblical readings, gospel music, and multiple addresses honoring King’s legacy a week and a half after the civil rights hero’s 90th birthday. Bodrick, a pastor at Twelfth Baptist Church in Roxbury and adviser to Massachusetts Senator Ed Markey, delivered the keynote address.

Welcoming the audience and giving the invocation was Tony Penna, S.J., who shared a story about the first time he heard Bodrick speak—through a YouTube video. While watching Bodrick, Penna said, he felt like Dietrich Bonhoeffer, a German theologian, did while visiting mainstream American churches in New York City.

“He was disappointed,” Penna said. “And he didn’t know why he was disappointed. And then one day, some friend took him to a Baptist church. And he began his long association with Baptist preaching. He said for the first time in his life, he heard a preacher who had a relationship to Jesus Christ.”

Following Penna, Rachel Vatelia, MCAS ’21, and Darnell Fils, MCAS ’22, read lessons from the Old Testament and the New Testament, before the first musical selection of the evening began.

David Coleman, an award-winning gospel singer and director from New England, was invited to the memorial ceremony to serve as guest musical director of the United Voices of Freedom, a consortium of three BC groups—the Liturgy Arts Group, Against the Current, and The Voices of Imani. The group sang gospel music intermittently throughout the evening.

Thair Brown, the 2019-2020 Rev. Dr. Martin Luther King Jr. Scholar and MCAS ’20, was introduced after the first musical selection. Brown, an economics major who has been involved with the Caribbean Culture club, Jamaica Magis, and AHANA+ Leadership Council, reflected on standing up for marginalized members of society and the need for activism.

“Each of us pays a hefty price by choosing to submit to our silence,” Brown said. “For in the next five years, we might find ourselves in a far worse position due to our lack of mobilization. MLK once said, ‘Freedom is never voluntarily given by the oppressor; it must be demanded by the oppressed.’ And this call underscores the very nature of our reality. If we want it, we have to fight for it and be ready and willing to give ourselves over to a cause that is greater than any one of us individually.”

Alexandria Leggett, a member of BC SLAM! and MCAS ’22, followed Brown with a slam poem that took on the challenges of an intersectional identity and how she chooses to respond to hatred in the world.

“But despite these truths, I’m going to love with all of my heart, because though in grammar and in math, two negatives make a positive, fire plus fire still creates a bigger fire,” Leggett said. “I make my own choice to put a positive into this world and put out that flame, because at my very best, I am made of love.”

When Bodrick came to the stage to deliver the keynote address, he began with a message of thanks for being able to carry on King’s work and announced the topic of his speech: advancing beyond the dream.

“We’ve become as a country so consciously fragmented, and we’ve become so divided that I could think of no other prophetic voice that I could call on to invoke that would ring about a soul-conflicting introspection that would recalibrate our commitment to justice,” Bodrick said. “The voice I am mindful of and thoughtful of is that of the Rev. Dr. Martin Luther King, Jr.”

Bodrick celebrated King and warned the audience not to forget King’s message. King’s dream, Bodrick said, still has not been realized in the United States.

“It was Dr. King who said that we must live and learn to live together as brothers and sisters or we will perish together as fools,” Bodrick continued. “And as we continually celebrate the legacy we cannot make the grave mistake to deify the man while denying his message. A message that was full of hope.

Bodrick spent his talk laying out his vision of justice, criticizing wars in the Middle East, record-setting federal judicial confirmations by conservatives, climate change denial, attacks on marginalized identities, immigrant detentions, and attacks on Roe v. Wade. But dreams for justice, Bodrick said, is not enough—they must be carried out through faith.

To advance beyond the dream, Bodrick said, people must believe in their dreams and not let other people or aspirations deter them.

“You got to believe it in yourself before anybody else will,” Bodrick said. “… I need you to dream, BC.” 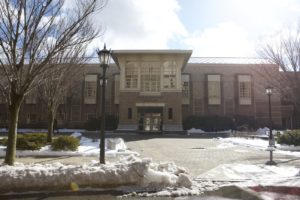