Home » In Back-and-Forth Battle at UNC, Eagles Escape With Win 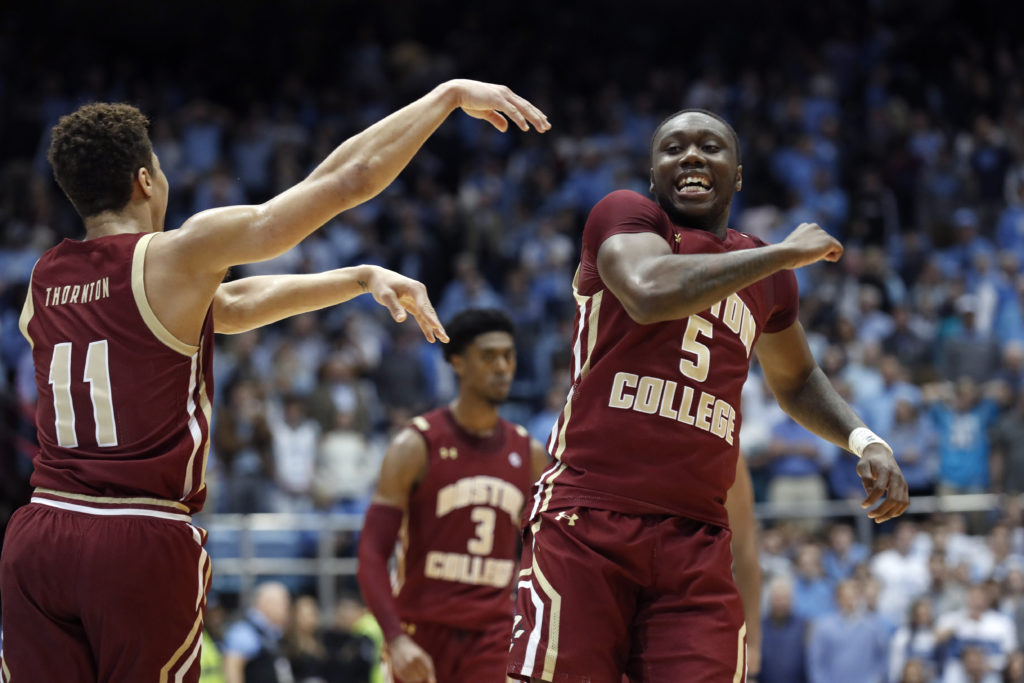 In Back-and-Forth Battle at UNC, Eagles Escape With Win

Down by one in the final 17 seconds of the game, Jared Hamilton was fouled while taking a 3-point shot. The entire stadium stood on its feet to distract him, and his first free throw bounced off the rim. He sank his second and third shots in front of a raucous UNC crowd, and the Eagles took the lead.

With just seconds left in the game and Boston College men’s basketball (11-11, 5-6 Atlantic Coast) ahead by one point, Cole Anthony launched a desperate 3-pointer that was well off the mark, and the Eagles earned their fifth conference win this season with a 71-70 victory over the Tar Heels (10-11, 3-7). With the win—BC’s first against UNC since Feb. 20, 2010—the Eagles have already won as many conference games as they won all of last year.

The final score is indicative of the close back-and-forth game that the Eagles aren’t used to this season. Fourteen of the Eagles’ 21 games so far this season have been decided by double digits, whether they were in the Eagles’ favor or not, so Saturday’s game was a bit of an anomaly.

The Eagles entered the locker room at halftime ahead by two points, largely thanks to Jared Hamilton’s 10 first-half points. The Eagles made three of their first five shots from the floor to take an early one-point lead, and they never led or trailed by more than five points in the half.

Two long-ball passes near the end of the half gave the Eagles their largest lead of the period at four, but UNC was quick to counter. Within a minute, the Tar Heels flipped the scoreline and took a one-point lead nearing the end of the half. BC responded once again and headed into the break with a two point lead.

BC’s halftime lead was indicative of its 48 percent first-half shooting clip, but the Eagles entered the locker room ahead despite coughing up the ball 12 times in the first half.

As the second half began, the Eagles had a new energy. They went on a 9-2 run to open the half, capped off by a spectacular fastbreak dunk by none other than Jared Hamilton.

A defensive rebound by Steffon Mitchell and a layup by the newly returned from injury Nik Popovic gave the Eagles their largest lead of the game at 10, but the Tar Heels weren’t ready to back down.

A few more back-and-forth points kept the Eagles well ahead until Anthony and Armando Bacot began to chip away at the lead. Once again, UNC took a one-point lead, with just nine minutes of play remaining. The Eagles shot an impressive 55.56 percent from 3-point range and 48 percent from the field through the first half. Though both percentages went down by double digits in the second half, the Eagles’ first half offensive success is a far cry from the struggles they have had so far this season.

The scoreline continued to flip-flop for the rest of the game until Hamilton sealed the win in the final seconds.

Hamilton began the game against North Carolina on the bench, but he made all the difference in the Eagles’ win. The senior put up a team-high 18 points—including the game-winning free throws—in the Eagles’ one-point win over the Tar Heels.

Jared Hamilton wasn’t the only of the Hamilton brothers to make an impact, as his younger brother Jairus notched five points and five defensive rebounds. Derryck Thornton, the graduate transfer out of USC, had 15 points, 13 of which came during crucial moments of the second half.

Despite Anthony’s 26 points off the bench—seven higher than his season average—BC controlled the game on both ends of the court to open up a double digit lead in the second half. Three other Tar Heels scored in double digits individually, and UNC grabbed 42 rebounds to BC’s 35.

The Eagles’ schedule doesn’t get any easier from here. They head back to Chestnut Hill with a win, but No. 9 Duke will take a trip to Conte Forum on Feb. 4. Last time the Eagles faced the Blue Devils, it was a blowout loss, but the momentum from Saturday’s win and home court advantage are sure to help the Eagles.