The art, art history, and film department continued its search for a new assistant professor of modern and contemporary art this week with a presentation from Lindsay Caplan, the second in a series of three lecturers who are finalists for the position. Caplan comes from Brown University, where she is a research associate and teaches courses on modern art. Caplan received her bachelor’s degree from Wesleyan University, a master’s in sociology from the City University of New York (CUNY), and a doctorate in art history from the graduate center at CUNY.

Caplan’s lecture, entitled “Why ‘Programmed’ Art? The Social Significance of Early Computer Art in 1960s Italy,” focused heavily on her current research in art, social theory, technology, and politics. Caplan’s research aims to combine the social sciences with art in order to better understand the context in which certain art is made. She is currently working on a book that focuses on this theme, in particular the era of “new media” in 1960s Italy and how society and technological advances heavily influenced the art scene during this time.

“My aim with this talk, as with my writing and teaching, is to demonstrate how the study of modern and contemporary art can contribute productively to broader conversations about society, collective agency, and the capacity for social change,” Caplan said. “Art history is, in my view, a way to excavate alternative visions of humanity and social life. It can stage an experiential encounter with the radically different, take us outside ourselves, and defamiliarize the familiar.”

While presenting the works of the post-war art collective Arte Programmata, Caplan explained how ordinary materials and unassuming settings can be completely transformed by art into something that shocks viewers and causes them to feel a type of sensory dislocation or confusion. A major component of the works in the Arte Programmata is the ability of viewers to interact with the art.

“The artist is a programmer who provides a platform for engagement, but does not ultimately determine its end,” Caplan said. “Program works include the audience in the creative process, empowering them to exercise their uniquely human creativity at once echoed and encouraged by the mutating form of the work.”

Although the idea of unlimited creativity sounds appealing, Caplan argued that the experience of program art is not one of openness and liberation, but a rather limited experienced.

“The crux of my argument is that behind all this rhetoric of openness and freedom is the more complex and historically interesting assertion that for any kind of social engagement to take place, one needs a commonly shared platform, a set of protocols, a program,” Caplain said.

Caplan presented the 1964 exhibit Space, Light Lines, and Spectators by Davide Boriani to emphasize this point. Boriani’s exhibit was simply a dark, square room with 32 motion-sensor spotlights attached to the walls and ceiling. This interactive environment was meant to give visitors a deep sense of ambiguity as to who or what was in control as different lights were triggered, illuminating the spots visitors were walking through. The combination of different sounds and lights flashing on and off was designed to encourage viewers to feel how manipulated their environment is and can be.

“These works are clearly about control, but what does it mean to enclose the viewers and to claim that this enclosure activates, liberates, or otherwise frees the audience?” Caplan said.

She said this contradictory style was actually due to the artist’s reaction to the political situation in Italy at the time, when the structure of communism was quickly collapsing while consumerism was creeping into the culture.

“Now, in this context, artists felt that they had to navigate the Cold War ideological terms of individuality and collectivity with precision,” Caplan said. “And this, I contend, is the reason why artists of Arte Programmata turned to early computer technologies and cybernetics and information theory and related ideas.”

Caplan closed her lecture by further explaining the narrative arc of her upcoming book and how she transitions from describing the origin of Arte Programmata to the way the Arte Programmata style still has a strong influence on art in the present day.

“This book centers on the way that art and technology are equally means of structuring social interaction,” Caplain said. “It presumes that art is actually a place where these questions of society can be confronted, experimented with, and better understood.” 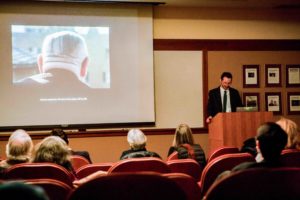