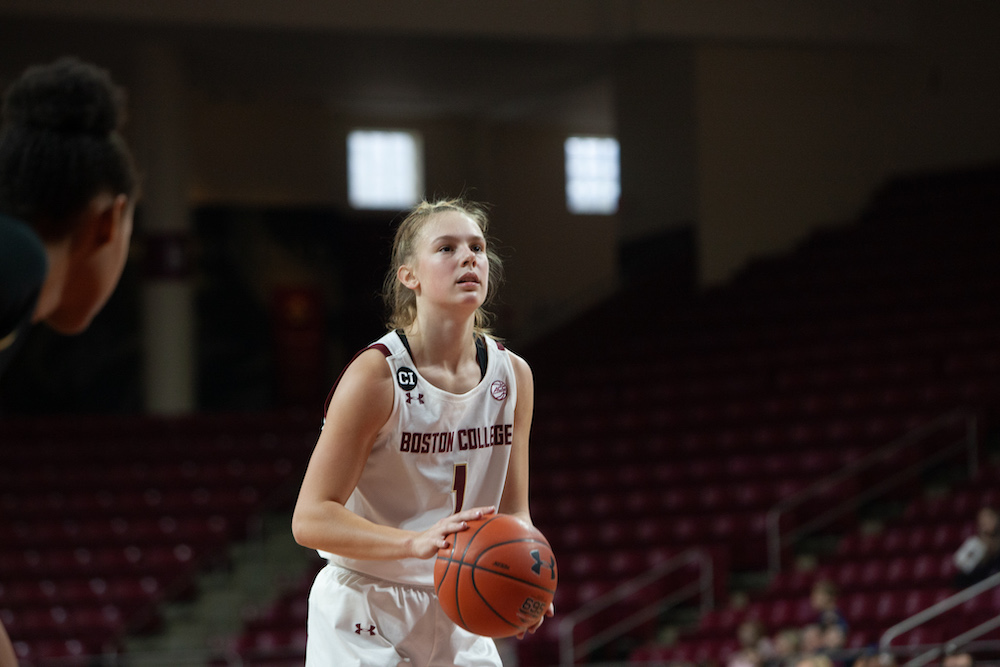 Although Boston College women’s basketball has strung together a number of strong performances over the last month, including a pair of victories over Georgia Tech and No. 14 Florida State, a home conference victory still eluded the Eagles. Among Atlantic Coast foes, No. 7 NC State, No. 5 Louisville, and Virginia have come through Conte Forum and emerged triumphant against the Eagles.

“On the offensive end, one of the things I was really happy about was Emma Guy getting 1,000 points,” said BC head coach Joanna Bernabei-McNamee. “I think that’s a really big milestone for a player that really didn’t get to play much of her sophomore year, so for her, it’s really like scoring those thousand points in three years.”

Guy was dominant for the Eagles all game. The Demon Deacons had no answer to her diverse range of post moves and deft ability to position herself to receive entry passes from the Eagles’ guards.

The Demon Deacons are one of the top rebounding teams in the nation and outsized BC at every position except center.

Early in the game, it seemed as if BC had no counter to Wake’s superior size and rebounding ability. With 1:52 left in the first quarter, the Deacons led 17-11. Wake forward Ona Udoh was imposing her will on the Eagles, scoring an easy six points off post moves and tallying a block on both Guy and Taylor Soule.

While the Eagles have one of the top offenses in the NCAA, it was their defense that carried them against the Demon Deacons. BC’s guards held up well in matchups against significantly bigger players, collecting 11 steals and continuously forcing Wake into heaves of desperation at the end of the shot clock.

Wake is one of the worst 3-point shooting teams in the nation, only hitting 4.8 per game. The Demon Deacons’ lack of confidence in their shooting was clear, as they went 2-10 from 3-point range and continuously turned down wide open looks. Unconcerned by the Deacons’ outside shooting, BC was able to clog the paint and lock down Wake’s skilled forwards.

BC didn’t fare much better from the outside, hitting just four of its 16 3-point attempts. While Eagles guards Cameron Swartz and Makayla Dickens are two of the team’s top scorers, both players struggled to get into a rhythm. Dickens connected on three of her eight attempts, and Swartz shot just 2-11. Swartz is now 11-53 over the Eagles’ last five games.

With their shots failing to fall, both Swartz and Dickens showcased their ability to involve their teammates. Dickens racked up eight assists, and Swartz put together a highlight reel of impressive feeds, looping perfectly weighted entry passes to BC’s post players and feeding Georgia Pineau on a pair of full-court heaves.

Along with Guy, Soule and Marnelle Garraud picked up the scoring slack for the Eagles. Garraud employed her speed to constantly push the ball in transition, collecting 13 points off a trifecta of 3-pointers. Soule dominated the glass, picking up 11 rebounds and scoring off all four of her offensive boards.

Despite the impressive overall performance, BC’s bench players continued to struggle. The unit combined for only eight points, despite the fact that all the starters except Soule played fewer than 30 minutes.

“I think we really turned a page starting with the FSU game, and now we’ve won at home—big statement—and we just need to keep going,” said Guy.