James’ talk encouraged people to view the solution to the U.S. health care crisis as the provision of equity, rather than charity. People in crisis, such as the homeless, are often faced with more immediate challenges of survival. They do not tend to view health care as a priority, , James said. In order to address the problem of health care, other obstacles must first be removed.

“When you’re having to decide, ‘Well, do I use my limited resources to pay for rent, pay for utilities, feed my family, or do I use my limited resources for a co-pay or medical appointments or for a prescription or transportation to my medical appointments?,’ it’s an easy decision for those folks,” James said. “Health and health care will always rank secondary to survival … Meanwhile, perpetual cycles of ER visits, hospital admissions, poor health outcomes and high costs persist because those are just downstream consequences of root costs upstream.”

James expanded on the concept of upstream versus downstream approaches to health care, asking the audience to imagine what they would do if they came across a river filled with children with broken arms floating past them.

“Well you can stand there and pick them up all day long,” James said. “But until you go upstream to figure out where that’s coming from you never have a chance of not only not mitigating [the problem] for them, but no chance at all of eliminating it.”

James then talked about some of the ways BMC is approaching health care with an upstream method. She first discussed what BMC calls Complex Care Management, a program in which trained individuals go out into the community and help clients find the tools necessary to bring themselves out of homelessness.

Another way in which BMC has taken an equitable, rather than charitable, approach to health care is through investing in public housing, James said. It invested $6.5 million into nine separate housing projects throughout Boston—one of which is an investment in a private equity fund that is providing 323 units of affordable housing to a community in need.

“We have to be careful not to recreate the traps and things like that that have already been created,” James said. “You can easily do that, particularly when you’re thinking about something like housing. You can just keep warehousing people, moving them from one place to the next. That’s what public housing did back in the day.”

During the Q&A, James reflected on her various worldwide deployments to different emergency-response situations, including New York after the Sept. 11 attacks and Haiti after the 2010 earthquake, as well as her decision to become a doctor.

“Becoming a doctor was without question the best decision I ever made in my life because there’s such a reward waiting for you,” James said. “Every single time I get to sit there, and you can’t wait to shift that person’s perspective.” 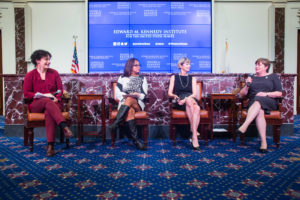