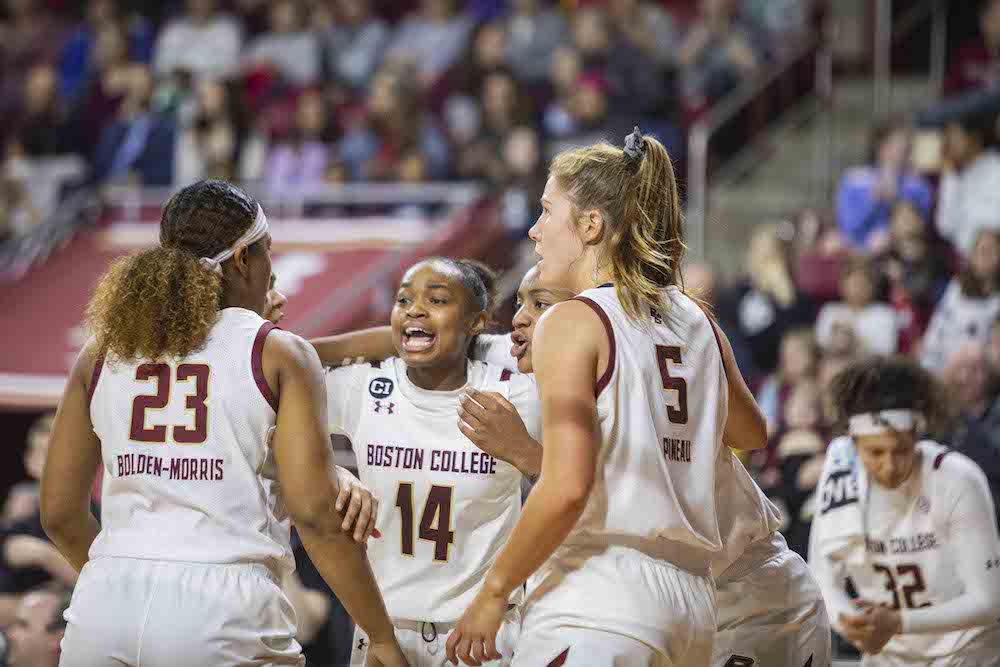 While Boston College women’s basketball’s usually strong offense has faltered in its last two games, only putting up 65 against Florida State and 67 against Wake Forest, the Eagles’ defense stepped up to secure them victories in both contests.

The Eagles’ (12-10, 5-6 Atlantic Coast) fortune flipped on Thursday, as the offense returned to form, but the defense was unable to keep Syracuse (11-11, 5-6 ) off the board in a 89-79 loss. The Orange led the game for over 38 minutes and ’Cuse head coach Quentin Hillsman extended his perfect record against the Eagles to 12-0.

It took BC until the 2:06 mark in the first quarter to make its first shot from the field, and Syracuse went into halftime with a 44-31 lead. An impressive third quarter brought the Eagles within nine, but they were never able to get closer than seven points in the fourth quarter despite a trio of 3-pointers late in the game.

Syracuse harassed BC’s guards with a full-court press for the majority of the game, forcing 23 turnovers. Makayla Dickens and Marnelle Garraud each coughed the ball up eight times. Turnovers have plagued the Eagles all season, and BC ranks in the bottom third of the country in turnovers per game.

The mistakes often arrived just as the Eagles were pushing back into the game. After Orange center Amaya Finklea-Guity opened the fourth quarter with a layup, Syracuse guard Teisha Hyman pickpocketed Garraud off the inbound and scored. The back-to-back baskets to open the period ended the momentum that BC had built during the third quarter.

“For us, we said coming in this game we had to do a couple of things, and one of them was to take care of the ball,” Eagles head coach Joanna Bernabei-McNamee said. “We really didn’t take care of the ball against the press, and like I told them, credit to Syracuse, they played really hard.”

Even so, the Eagles performed well offensively when they were able to get into their half-court sets. While Syracuse’s constant press hampered the Eagles’ ability to find open perimeter looks, BC exploited the holes in the Orange zone defense to get chances closer to the basket. Taylor Soule and reigning ACC co-player of the week Emma Guy were dominant in the post, scoring 18 and 23 points respectively.

The Eagles’ attacking mentality put them at the foul line throughout the game, and BC took advantage of the opportunities, connecting on 23 of the 31 attempts from the stripe. Guy, who made nine of her 11 foul shots, and Soule, who connected on 8-of-12, were particular beneficiaries of Syracuse’s foul-prone defense. The chances were a welcome change for a team that averages only 11.43 free throw attempts per game.

“I think that we avoided everything in the past—I’m going back to more early on in the year, even last year—we go to finish and when someone would come our way, we’d completely change our shot,” Bernabei-McNamee said.

The Orange’s tendency to foul forced the Eagles deep into their bench, and 10 non-starters saw the court. Four of their starters picked up at least four fouls.

Despite the Eagles’ offensive success, they were no match for Syracuse’s offensive onslaught. Regularly putting three players over 6-foot onto the court, the Orange used their size to screen their speedy guards open for 3-point looks or drives to the basket. Kiara Lewis scored 23 points and freshman Teisha Hyman put up a career-high of 16.

Syracuse’s size advantage and relentless energy also secured 16 offensive rebounds and the team had possessions with three or four chances at the basket on multiple occasions. Rebounding has been a strength for the Orange all season, and they rank No. 34 nationally in rebounds per game.

Taylor Ortlepp played 32 minutes off the bench as Cameron Swartz’s shooting struggles persisted, but Ortlepp proved to be little more of an offensive threat and shot 0-of-5 from three.

While their ability to get to the stripe is a good sign, the Eagles will need better play from their bench and to avoid turnovers as they prepare for the ACC stretch run.