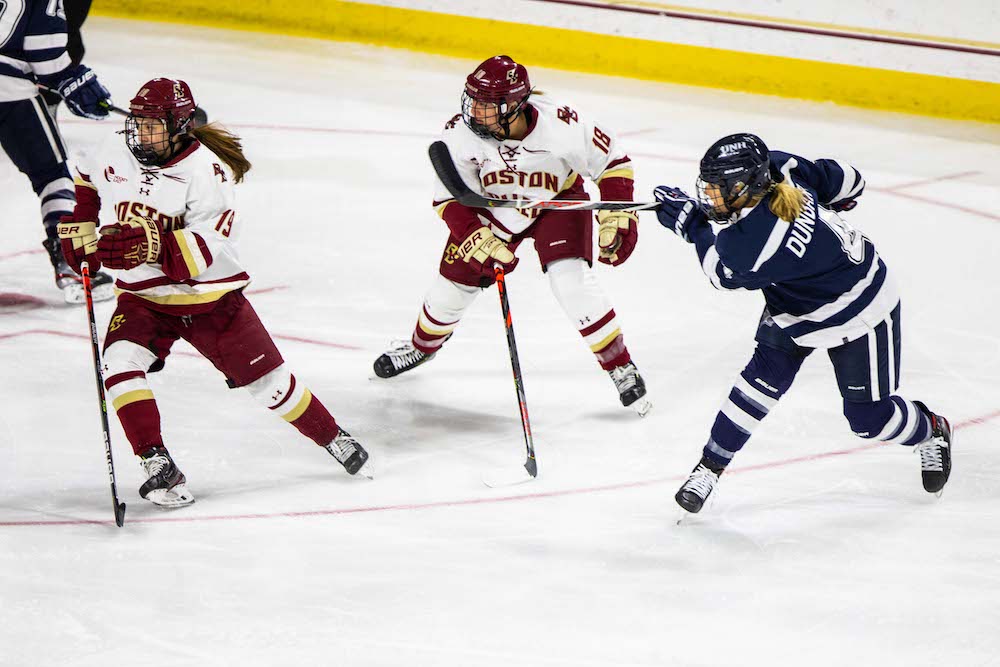 Boston College women’s hockey has been on a rollercoaster of a stretch the last few weeks. After beating Vermont 7-5 in mid-January, the Eagles tied the Catamounts the next day, split a weekend series with Providence, and took a dominating 8-3 victory over Holy Cross at the end of the month. Then, in the first round of the Beanpot, the Eagles were shut out by Boston University. BC’s stayed on their up-and-down track with final home game of the regular season, falling 3-0 at home to visiting New Hampshire.

The first period was all Wildcats (15-12-3, 11-10-2 Hockey East), as UNH scored its first two goals within three minutes of each other midway through the frame. The Eagles (14-12-3, 13-9-2) maintained possession for much of the first frame but struggled to escape their own defensive zone.

Tamara Thiérus was the first to strike as she jumped out of her own defensive zone for a breakaway and finished the one-on-one with a tap past Maddy McArthur on her glove side.

Jada Christian followed up soon after with a tally of her own on an off-balance shot to the bottom corner of McArthur’s right side to bring the Wildcats to a 2-0 lead early on. UNH was a man up when she scored after Kate Annese went to the box for tripping.

Even though the Wildcats led by two after the first, BC had more shots on goal with eight to UNH’s six. But the Eagles struggled to stay out of the box and gave up three penalties to UNH’s one, forcing the penalty kill unit to work overtime and leading to Christian’s goal.

The second period was marked by even more back-and-forth penalties and a stellar job in goal from McArthur to keep the Eagles within two of the Wildcats. In that frame alone, the Eagles committed four fouls, and the Wildcats added one of their own for a combined 10 minutes in the box.

During that time, though, McArthur got in front of shot after shot while her man-down defense struggled to contain UNH. Her diving saves from side to side ultimately kept the period scoreless and gave the Eagles a chance to regroup in the final frame.

“That’s what we need,” said head coach Katie Crowley. “We need Maddy to battle hard for us back there. I thought she did that for us.”

Despite even possession in the second period, UNH outshot BC 13-7, largely on chances in transition as BC struggled to get back. Every time, McArthur was there to stop it, or an outstretched stick knocked the puck just out of the Wildcats’ reach.

The Eagles opened the third period spending lots of time in UNH’s zone and forcing Wildcat goaltender Ava Boutilier to take on a bigger role than she had in the earlier part of the game. BC had begun to generate more movement on offense as a result of staying out of the penalty box for the first half of the period.

Midway through the frame, a near-goal from Hannah Bilka in the slot created a scuffle in front of Boutilier, but that was about as physical as the final frame got. Both teams avoided the penalty box until the last five minutes of the game. Annie Berry went to the box for tripping, but the Wildcats killed off the penalty.

Thiérus notched her second of the night in the waning minutes of the game to ice UNH’s’ victory.

Though the scoreline says otherwise, the Eagles had lots of chances to test Boutilier, but the goaltender had an army of blue jerseys in front of her for most of the third period. BC couldn’t capitalize despite some good looks in the offensive zone.

With playoffs on the horizon, the Eagles will have to be on top of their game in their upcoming matchups to earn a top seed.