Forget Tesla and SpaceX—South African-born entrepreneur Elon Musk made his greatest contribution to humanity yet on Jan. 31. It was on this fateful day that Musk posted a song to his SoundCloud account, Emo G Records. The EDM track, titled “Don’t Doubt ur Vibe,” is, simply put, transcendent. Musk promoted the single on Twitter and confirmed that he both “wrote the lyrics & performed the vocals!!”

The song isn’t Musk’s first foray into the music world. In March 2019, Musk released “RIP Harambe,” also through SoundCloud. Yet Musk didn’t have much involvement in the actual song—it was performed by rapper Yung Jake and written by Jake and songwriter Caroline
Polachek. While “Don’t Doubt ur Vibe” shares the heavily autotuned vocals and electro production of “RIP Harambe,” this latest single is a creative tour de force for Musk. It digs deep into the entrepreneur’s psyche, reaching new levels of emotion.

A simple lyrical structure serves as the backbone of the song. “Don’t doubt your vibe because it’s true,” Musk repeats insistently, leaning into each syllable. This is valuable wisdom that Musk is imparting, and he wants us to know it. Musk’s commanding vocals are modulated and twisted as they recite the mantra reassuringly over steadily pulsing synthesizers.

This line, “don’t doubt your vibe,” is coming from the man who called a cave explorer involved in helping the trapped Thai soccer team a “pedo guy in 2018,” who got booted from his position as chairman of Tesla by the Securities and Exchange Commission over a half-baked tweet, and who a good friend of mine once speculated might be the Antichrist—he is, after all, planning to implant computers into people’s brains in the near future. Has he ever, just once, doubted his vibe? Not a chance. He knows in his heart that it’s true. And now, with this song, Musk is passing on his zen attitude to us all. It’s a priceless gift.

But Musk doesn’t stop there. The tension ratchets up as fuzzy synths hammer faster and faster, then suddenly drop out. “Don’t doubt your vibe because it’s you,” he sings, revealing the full extent of his philosophical genius. The beat drops, and Musk gives us a minute to ponder his words as a gentle melody floats over waves of computerized sound.

And there is much to ponder. The simple yet powerful move from “true” to “you” hammers home Musk’s message of self-affirmation. Not only should we be confident in our vibes, we should feel secure in the knowledge that we are living our most genuine lives. Your vibe is you. It’s your essence, one might even say your soul. To doubt your vibe is to doubt your very existence.

Musk is famous for his bold innovations, his ability to think outside the box. His approach to music follows a similar path. He does away with the traditional verse-chorus-verse precedent, instead opting for a minimalist structure that consists of a combination of his two mantras—”Don’t doubt your vibe because it’s true” and “don’t doubt your vibe because it’s you”—interspersed with instrumentals. Musk cuts through old, outdated models and offers up something fresh.

With 2.9 million streams on SoundCloud to date, it’s clear that Musk has touched on something big. The age of anxiety means doubt, not only doubt about the future, politics, and the general well being of the world, but doubt about ourselves. Our vibes are in a state of disarray. With “Don’t Doubt ur Vibe,” Musk offers us an antidote to the uncertainty. Now more than ever, we must be reminded not to doubt our vibes. Thank you, Elon.

soundcloud elon musk
In Response to “To Be Pro-Life, Be Pro-Climate”
‘Ten-Minute Plays’ Highlights Student Creativity 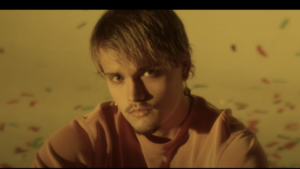