Olivia’s overly upbeat personality is clearly reflected in her music taste. The blend of country, indie, and oldie hits makes for an interesting listen to say the least. The playlist starts off with an optimistic opening track, “10/10” by Rex Orange County. “Treat People with Kindness” by Harry Styles mimics the same cheerful energy and message of hope and, well, kindness. The real twist comes when the playlist shifts to ABBA without warning or reason.

Olivia made the bold choice to use the Mamma Mia! soundtrack version of “Does Your Mother Know” instead of the original, but it oddly makes sense considering her passion for musicals. I have mild whiplash from the transition from ABBA to “High Horse” by Kacey Musgraves, although I have no complaints about the sassy country bop. Both “Quesadilla” by WALK THE MOON and “Unbelievers” by Vampire Weekend have the same vibe that you would expect from an intro to indie 8tracks playlist straight from my early high-school years.

“Circles” by Post Malone brought me the sense of joy that comes when I sit in bed curled up watching TikToks. While Olivia claims that she liked “Circles” before it became a TikTok song, that was still the initial thought that came into my mind when I heard the first notes. The playlist shifts to a blast from the past with ’70s and ’80s hits—“Rich Girl” by Daryl Hall and John Oates and “I Wanna Dance With Somebody” by Whitney Houston—which gives me reason to believe that Olivia may be a grandmother trapped in a college student’s body. The playlist concludes with arguably one of Panic! at the Disco’s best songs, “The Calendar.” Olivia’s music taste is full of spunk and funky-freshness that blends together both Generation Z and Baby Boomer energy in one. 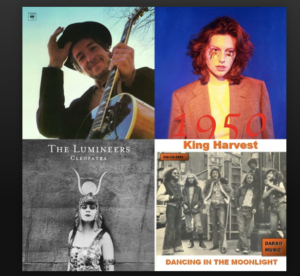