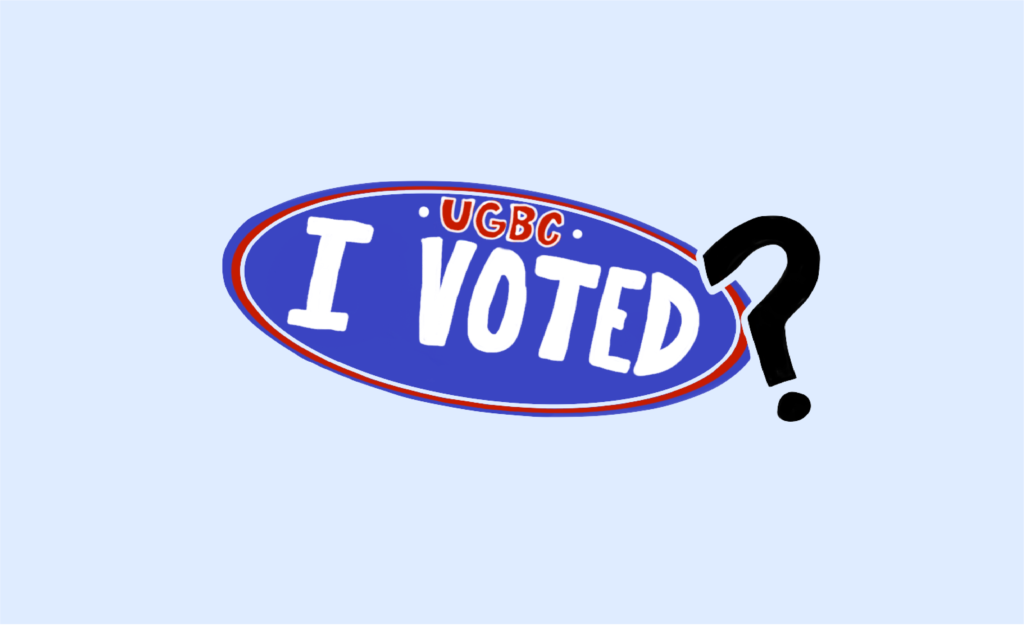 In a Tired Election, Vote Freshmen

These are just some of the vapid terms UGBC candidates are using to compensate for the lack of substance in their platforms as they beckon for your vote ahead of Tuesday’s election. And you, dear reader, should do nothing but roll your eyes and carry on with your day.

If you haven’t noticed—and it’s completely forgivable if you haven’t—UGBC elections are this week and the acronym slingers are at it again. Somehow, the number of people who want to do this job has doubled, and so this year there are four teams.

The ballot features some old, some new, some insider, some outsider. The establishment UGBC senators running deserve little attention, as they have plans for nothing more than virtue signaling with unmeetable demands that have been shot down in the past.

John Gehman, MCAS ’21, and Leonardo Escobar, MCAS ’22, both UGBC members, are running on a platform of “Universality, Intersectionality, and Boldness”—a platform that, for starters, could have been improved with a thesaurus.

Gehman identified their central campaign platform as, “not necessarily a policy but a collection of policies,” called the “Intersectional Social Progress Pledge,” composed of 17 points, 14 of which begin with the ever-radical, “Push for.” And the fish rots from the head down—what follows in each sentence is equally as mushy and substanceless.

Number one reads, “Commit to condemning all systems of advantage…” and then goes on to list all of the bad -isms and -phobias in the lexicon. I encourage Gehman and Escobar to find the last UGBC president who didn’t condemn racism, sexism, transphobia, etc.

Number two—divestment from fossil fuels—is not something Gehman and Escobar would have the authority to accomplish as UGBC president and vice president. Nor is number three—increasing funding for the Thea Bowman AHANA and Intercultural Center, Women’s Center, and Montserrat Coalition, among others—or four—an LGBTQ+ resource center—or five—more gender-neutral bathrooms—or six—creating an associate dean of diversity in the Morrissey College of Arts and Sciences.

And it goes on, all the way up to 17. It’s a list of baseless speculations that misunderstands the role of UGBC leadership. Gehman and Escobar have tried to make appeals on social media by highlighting the diversity within their cabinet. But any campaign that relies on the diversity of its team instead of the content of its policies deserves nothing but a BC-look-away.

Czar Sepe, MCAS ’21, and Jack Bracher, MCAS ’22, revealed why they’re not worth your vote with one simple policy position: MentalHealthEdu. Presumably, it would feature e-quizzes and video lectures like the other Edu programs.

We all know AlcoholEdu has done such a great job over the years educating students about the dangers of irresponsible consumption, especially when one considers what healthy and normal relationships BC students have with alcohol. And DiversityEdu was also a hit.

So why not try to tackle the wide-spanning and complex mental health crisis in manners similar to racism and underage drinking? Those three things are definitely the same and definitely can be solved in similar ways. In fact, it makes perfect sense that the depression and anxiety from which students suffer in this age of technology could be solved with more technology.

There is a shortage of counselors on this campus, and the time it takes to get an appointment is disgraceful. What I don’t want my student representatives to do is petition the administration for more Band-Aid solutions instead of face-to-face time with counselors. Not only would the idea be a gross waste of money, but worse, it would signal to the administration that these kinds of impersonal, 30,000-feet-in-the-air solutions are what students want and need.

Though they’re not the only team with proposals to familiarize incoming students with mental health resources on campus, Sepe and Bracher are the only team foolish enough to package their idea into an online module and slap an “edu” on the end of it. And it’s the only reason one needs to realize that they lack the critical judgment necessary to lead the student body.

Christian Guma, CSOM ’21, and Kevork Atinizian, CSOM ’22, are running on the promise to not accept the $4,000 and $3,500 stipends that come with winning serving as UGBC president and vice president, respectively. Guma’s résumé is untainted by UGBC positions while Atinizian is a senator.

Their promise to find a way to get discounted Lyfts and Ubers for the student body is refreshingly outside the box, although perhaps questionably feasible.

But they still managed to disappoint at the Diversity and Inclusion Debate when they toed a traditionally UGBC line. Guma naively said that if they just wrote down the plans for the LGBTQ+ resource center and handed them to Joy Moore, the vice president for Student Affairs, BC would have no choice but to do the thing it has vowed not to do on multiple different occasions.

At best, it demonstrates an ignorance of Leahy’s past comments. At worst, it’s a bad-faith argument intended to win over uninformed voters and isolate candidates who did not waste their breath on such a false promise.

I support BC designating a space on campus for LBGTQ+ students. I don’t support lying to the student body about its feasibility to win votes. The administration has never budged in response to students who have advocated for this in the past, and there are a number of more practical initiatives that could be accomplished this year.

This leaves us with one team: the freshmen. Dennis Wieboldt and Lorenzo Leo, MCAS ’23.

Though both have been contaminated by UGBC membership, it’s not too late to save their souls. After just a semester inside the bloated corpse of student representation, Wieboldt and Leo realize that UGBC needs change from within.

Their website features a number of comprehensive PDFs with policy proposals for restructuring the sluggish UGBC bureaucracy, increasing fairness in student conduct hearings, and releasing the weekly UGBC meeting minutes to improve transparency. And their lack of experience should be seen as an asset in this election.

It’s time for BC students to reject self-important career bureaucrats. A vote for the freshmen is a vote to shuffle UGBC and to see if a fresh approach can rejuvenate a tired organization. And besides, dear reader, as the freshmen’s website asks you as you scroll to the bottom: What’s there to lose?