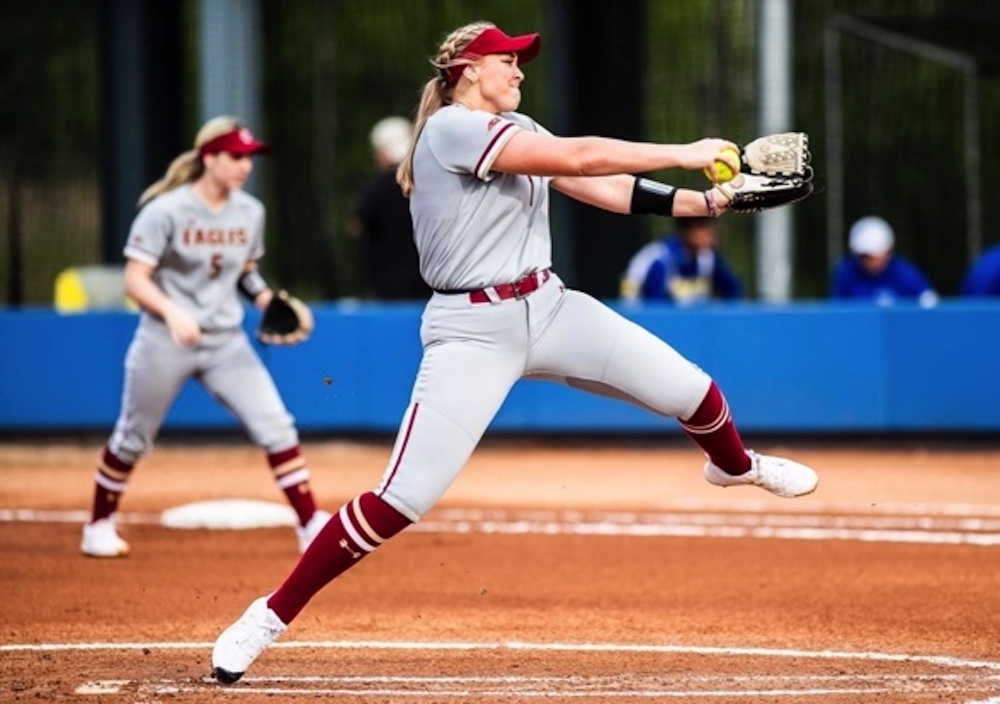 When Boston College hired Amy Kvilhaug as its new head softball coach after the 2019 season, the Eagles’ pitching woes were at the forefront of the 22-year coaching veteran’s mind. BC’s pitchers compiled a team ERA of 5.22 last year, a mark that ranked 250th in the nation, and the Eagles stumbled to an 18-35 record. Playing in Fort Myers at the Florida Gulf Coast University Kickoff Classic, the Eagles kicked off their 2020 campaign last weekend. Though BC went 2-3, the team’s pitching was much improved from the previous season, as the Eagles allowed an average of just two runs across the five games. Susannah Anderson was masterful, conceding only a pair of earned runs in 21.1 innings of work and throwing a no-hitter against Georgetown.

The Eagles opened the weekend with a game against Long Island, followed by Florida Gulf Coast, Connecticut, Delaware, and finally Georgetown.

Anderson showed no signs of fatigue in her third start of the weekend, pitching a no-hitter and striking out 10 batters. Georgetown’s only base runners came from a pair of rogue pitchers that hit batters in the early innings of the game. Georgetown pitcher London Diller also threw a no-hitter, but gave up three walks. Those baserunners turned out to be enough for the Eagles, who scored their single run in the fifth inning. After Maddy Carpe got walked and Ginna Boccagno reached base on an error, Kristin Giery advanced the runners on a groundout and Emme Martinez brought Carpe home with a groundout to shortstop. The loss to the Eagles capped off a rough weekend for the Hoyas, who lost all five of their games.

The morning before beating Georgetown, the Eagles were blanked by Delaware for their third-straight loss of the tournament. BC starter Peyton Schnackenberg pitched well, allowing just one earned run and six baserunners in six innings of work. BC’s hitters consistently reached base, but the Eagles were unable to capitalize on their opportunities and left 12 on base without a run. Ellie Mataya led the Eagles with three hits, and Jenna Ergle walked three times. BC seemed poised to break through in the fifth inning when it loaded the bases off a pair of singles and a walk. Delaware replaced starting pitcher Maddi Marsh with Kailey Christian, who struck out the next two Eagles and snuffed out the threat. BC was not the only team to struggle against Delaware. The Blue Hens dominated the tournament, losing only one game and clobbering Long Island University 11-2 and Georgetown 4-0.

Connecticut second baseman Kiwi McDaniel singled in the bottom of the eighth inning, bringing Aziah James and Briana Marcelino home, and the Huskies walked off against the Eagles. UConn scored its first tally in the fifth inning, but the Eagles tied it up in the seventh when Carpe scampered home off a passed ball. The Eagles took the lead in the next inning as Ergle brought Mataya home with a single, but the Huskies responded with their walk-off heroics to end the game. Anderson pitched well again for the Eagles, lasting the whole game and striking out eight batters. Only one of the runs against her was earned due to a pair of costly errors.

Tournament host FGCU walked off against BC in the bottom of the eighth on a wild pitch from Schnackenberg. Sloppy play was the story of the game for BC as it racked up four errors, three wild pitches, and three walks. BC opened the scoring in the second inning on a double from Djane Valido. Both teams scored a pair of runs in the fourth, and FGCU got another in the fifth to tie the game. CC Cook started for BC and went 4.2 innings, allowing two earned runs before being replaced by Schnackenberg.

The Eagles opened their season and the tournament with a win over Long Island on the back of a strong performance from Anderson, who pitched a complete game and struck out seven. LIU got off to a strong start, scoring in the first inning on a bases-loaded groundout and getting another pair of runners on base in the second. The Sharks did not lead for long, as BC scored two runs in the second off a homerun from Ergle. LIU starter Elena Valenzuela shut the Eagles’ offense down for the rest of the game, but LIU was equally hapless at the plate. Anderson only allowed two hits and a walk in the final five frames, and the Sharks never threatened again.