Home » ‘To All The Boys: P.S. I Still Love You’ Is Refreshingly Honest
Arts, Movies, Review

‘To All The Boys: P.S. I Still Love You’ Is Refreshingly Honest

Serving as a celebration of the years that are often wished away, To All The Boys: P.S. I Still Love You emblemizes the awkwardness and innocence of adolescence. To All The Boys I Loved Before sparked immediate popularity upon its release in 2018, and director Susan Johnson has now passed the torch on to Michael Fimognari, who lives up the high bar set by the former. The sequel both continues the charm of the first film and honors the bestselling novel series by Jenny Han that both movies are based on.

The film, which will be released on Netflix on Wednesday, promises the wholesome, feel-good emotions that typically accompany a romantic comedy but does not limit itself to the rules of the genre. The multi-dimensionality of Han’s characters enable the movie to dive into much deeper topics, including the complexities of family unity and the importance of remaining true to your origins, all the while unraveling a romance characterized by strings of awkward, painfully relatable experiences.

P.S. I Still Love You is a lovely, lighthearted romance, a feel-good piece that leaves you itching to watch it again. Fimognari champions a time in our lives that is often remembered with a cringe, but he makes viewers nostalgic for the simple moments that they may have once cast aside as insignificant.

The movie follows the success of its 2018 Netflix Original predecessor. The movie charmed viewers with its faithful adherence to Han’s story, which follows teenager Lara Jean (Lana Condor) and her unorthodox way of dealing with crushes: writing letters to them. She never intended to send the letters, but with the help of a pesky younger sister, the objects of Lara’s affection receive the letters, setting into motion a messy plot that eventually ends with Lara Jean falling in love with one of her former crushes, Peter (Noah Centineo). The characters translate well to the big screen and the plot—with a few minor exceptions—still takes its audience through a series of captivating twists that hold viewers’ attention effortlessly.

The film expertly illustrates the struggles of relationship maintenance, the awkwardness of “firsts,” and the challenge of acting in a way that is genuine to your feelings.

Though Fimognari’s decision to stay faithful to the book series speaks for the success of the film, actress Lana Condor is the true secret ingredient. Through extensive inner monologues, the audience can understand the deeper level of the situations in which she finds herself. She steers away from the usual quirky interpretation of female leads in teenage romantic comedies to lay down a new precedent. She presents Lara Jean as independent and strong—the point of the film is not that the girl gets the boy in the end, and she makes that obvious from the start.

Jordan Fisher brings a newfound dynamic to the sequel, playing John Ambrose in a way that perfectly complements the character of Lara Jean. Noah Centineo is back and better than ever, offering the same effortless chemistry with Condor he demonstrated in the first film.

The production of the piece further sets it apart from traditional rom-coms. The cinematography is unexpectedly beautiful, with a complementary color scheme of blues and yellows setting the tone of the film. Fimognari doubles as the director of photography and creates a sunny, vibrant world that gives the piece aesthetic value.

To All The Boys: P.S. I Still Love You dives much deeper than a rom-com. It’s a coming of age film that celebrates the awkwardness and innocence of teenage years. It navigates through the journey of defining yourself, understanding new emotions and experiences, and facing your past with courage. 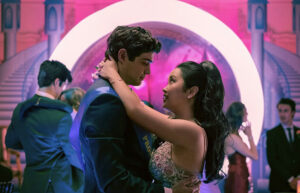