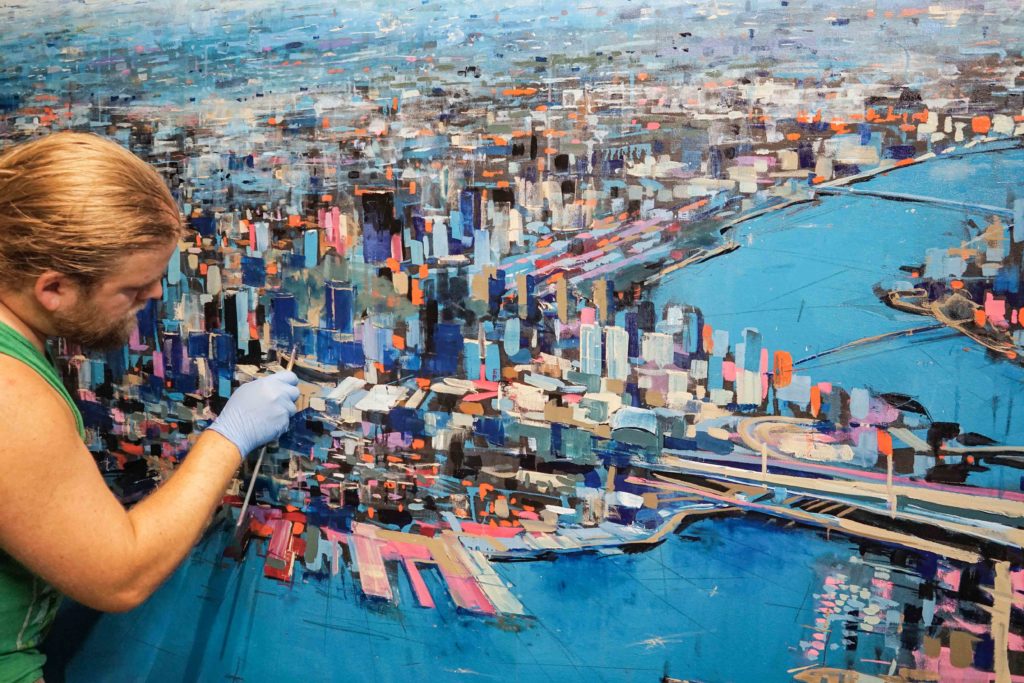 Adam O’Day knows what a party looks like—people dancing on top of a bar, booze flowing freely, and paint brushes moving. When O’Day’s friend Louis DiBiccari’s restaurant Tavern Road was closing, he painted a picture to celebrate the closing night and O’Day captured the frenzy in the kitchen at the party for the closing night—painting from real life is his forte. With people dancing and him painting the chaos, O’Day mixed business and pleasure—it just so happens that this painting was at “one of the craziest parties” he’s been to.

O’Day has been more than just the life of the party, though. He has been making waves ever since his entrance into the art world. In 2005, O’Day earned his bachelor of fine arts from Lesley University’s College of Art and Design. He chose Lesley University not only because of his interest in art but also because of the computer science program the school offers—he wanted to learn to code as well as paint.

“It was one of the only places where I could take both art and computer classes, which was really important to me,” O’Day said.

Beyond gifting him with a degree, Lesley University’s proximity to Boston also helped to jump-start his career. In 2014, O’Day won the Portrait of a City competition, in which citizens of Boston voted for their favorite piece of art inspired by metropolitan Boston. Released in 2015, O’Day’s winning piece,Transit, depicted the Boston skyline with vibrant colors and bold strokes. His name popped up in the media, bringing attention to his work. Commissions started rolling in: 30 prints of the piece were bought by the mayor’s office and distributed to visiting dignitaries.

From that moment on, O’Day’s career was on an upward trajectory. Following his win in a city-wide competition, his next stop was TD Garden, where he painted a mural of the Boston skyline for the Boston Bruins.

“The most badass commission was this one that I did for the Bruins because of the celebrities that posed in front of it,” O’Day said. “They also gave out signed prints of the mural and I must’ve signed 300 to 400 prints. It was cool because it was the widest reach I’ve had.”

After that, O’Day had a bit of trouble keeping his email inbox empty—the attention he received from this commission garnered him attention for new business.

While capturing the attention of the general public, O’Day’s work especially caught the eye of Shane Leonard’s mom. Leonard, CSOM ’20, soon became one of O’Day’s two interns, learning about art under O’Day’s wing. Later, Leonard had the opportunity to participate in a painting at TD Garden with O’Day. The two painted a bear and whiskey glass together for Jack Daniel’s at Game Seven of the Stanley Cup. As two self-taught artists, the pair gelled.

“His art was cool, and he was making outside art and I know what that’s like,” O’Day said.

O’Day passed his tricks of the trade onto Leonard. Before O’Day, Leonard had never worked with oil paints before. But O’Day transformed Leonard from the self-taught artist that he was to a more refined student of art, according to Leonard.

“Everything I know is due to him, like the whole process of starting and finishing a painting,” said Leonard.

While subjects in Boston mainly comprise the portfolio of O’Day’s comprehensive murals, he also works in his studio. In order to get into a productive mindset in the studio, he uses music. If things are hectic and frustrating, O’Day puts down the paint brush and picks up a pair of drumsticks—he will play drums to loosen up and end up painting until late at night. For him, music is essential to the artistic process.

“Music and art are like this,” he said, intertwining his fingers. “Bad music is not good for the creative flow.”

For O’Day, any type of powerful music influences his creative process, whether it be sad cowboy music or heavy metal. Music is also the product of his artistic process—he has designed posters for music groups such as Dave Bruzza of Greensky Bluegrass. For Leonard, music helped him mesh with O’Day—their shared taste in music and humor bonded the two, helping them work in tandem.

For O’Day, the influence music has on his art stems from his personal involvement in the craft. When he’s not painting, O’Day is a part of a metal band called Mollusk, which draws its inspiration from groups such as Black Sabbath. If he weren’t an artist, he’d be a full-time musician, O’Day said.

His family also influences his artistic and music career, O’Day said. Since he is a self-employed artist, he tries to paint a little bit each day to maintain his business. Sometimes, O’Day paints for a commissioned job. Sometimes, picking up a paint brush simply means painting with his family. Often, O’Day gains inspiration for his professional works on outings with his family, even from events as simple as going to the park.

O’Day’s art heavily focuses on the world around him, as evidenced by his Boston and New York City landscapes on his website and in his gallery. He does not set up shop in the street to capture images that spark a painting. Rather, he snaps pictures to paint later. A lot of his inspiration also comes from his fellow artists, from those around him to the greats of the art. He said that whenever he goes into museums, his “creative bank comes out chock-full” of ideas to paint.

Even though O’Day’s portfolio features works predominantly based on real life prominently, he has also done other unique projects. For example, he has worked with the Aeronaut Brewing Company to create IPA label designs for a project titled Baby Dictators with fellow artist Andy Jacob. O’Day designed a lithograph-style label for the IPA Balloon Factory, a type of beer,  featuring a picture of President Donald Trump in response to a Pro-Trump supporter who popped a balloon of the president shaped as a baby at an anti-Trump protest earlier in the year. The profits for the beer go toward balloons for future protests against the president.

When O’Day collaborates with other artists, the process often involves both artists taking a singular topic with each having their own interpretation of the concept, he said. He has collaborated with many people—including an Iranian astrophysicist. In the upcoming weeks, O’Day will release another beer design, Pilsner of Peace, as a response to the recent conflict between the United States and Iran. The design features scenes in space, described by the astrophysicist which he then drew.

“We wanted to depict how world peace could be so easy if the world realized how small it is,” O’Day said.

O’Day created three images for the project. One image is green, depicting a futuristic Persepolis, the past capital of the Persian empire, as a nod toward Iran’s history and the impermanence of civilizations. Another has a blue color scheme with a deer and a blue radiating light in it to represent the Carl Sagan quote that says, “Look again at that dot. That’s here. That’s home. That’s us.” The third featured a red color scheme with images of a satellite.

O’Day noted that the project was to remind everyone to “not screw up” peace—and the recipe for the beer would be made available for any breweries around the world so that the message could spread globally. A Netflix special on the project is possibly in the works, he said.

His next lithograph collection will also include some subjects that he has not covered extensively before. His spring collection will feature a look at Cape Cod. The two lithographs, one with the color scheme blue and the other orange, will pay homage to the sea and the summer lifestyle in Cape Cod. In one of the lithographs, a camper van is in front of a campfire scene with various objects that one would expect to see at a Cape Cod beach, such as an octopus.

While he loves Boston, O’Day said his dream place to have his art shown would be Europe. By drawing inspiration from the world and following his artistic process, he continues to try to grow as an artist so he can get to Europe someday.