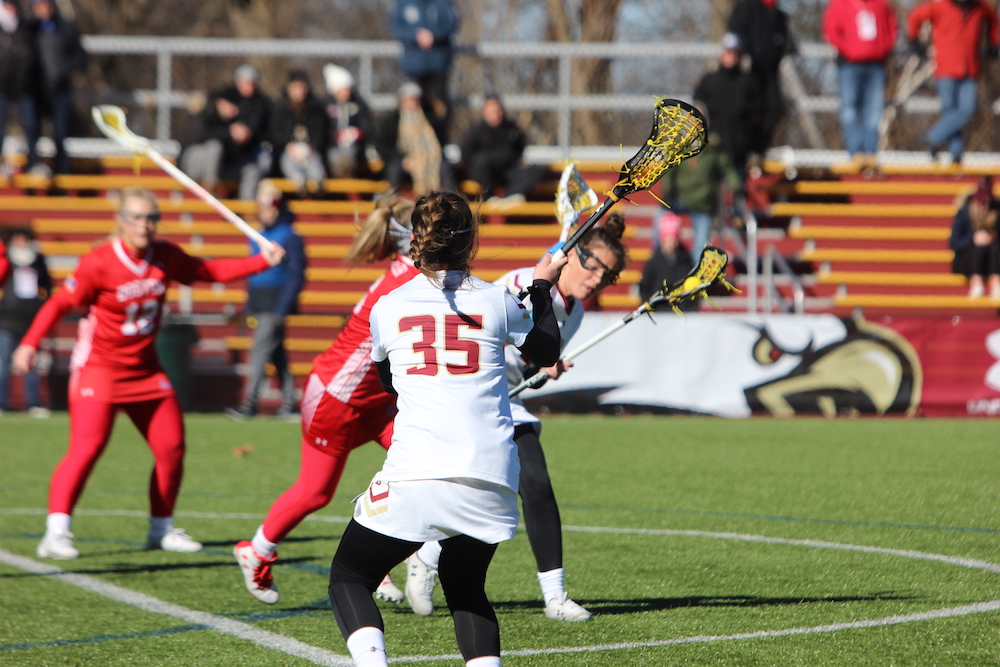 In Record-Breaking Performance, North Guides Eagles to Win at BU

With a one-player advantage, Boston College lacrosse passed the ball around the eight-meter mark, searching for the best scoring opportunity. The ball moved from right to left—from Jenn Medjid to Cara Urbank to Charlotte North. As soon as North gained possession, the Duke transfer stepped toward the net. Parallel to the near post, she faked a shot low and then went high, dropping the ball over the shoulder of goaltender Kennady Smith.

Once it hit twine, North ran away from the crease and stretched out her arms in celebration. Then, she jumped in the air and pumped her fist, turning to face her teammates. North had her seventh goal of the game, and BC was well on its way to its first win of the season.

Four days removed from losing their first regular season game since April 8, 2017, the Eagles overcame another slow start by outscoring Boston University 11-1 in the second half of Wednesday’s bout at Nickerson Field. With that, BC claimed a decisive 16-6 victory—its 11th-straight win over the Terriers.

At first it seemed as if the No. 14 Eagles (1-1) were back to their old ways. After losing six of 11 draw controls in the first half of its season-opening loss to Massachusetts, BC—which ranked fourth nationally in faceoff percentage last year—won the first four draws of the evening. North was behind it all, using her stick to direct the ball to the same place in the Eagles’ half each time.

In turn, BC dominated possession during the early portion of the game. Medjid tested BU (0-1) starting netminder Bianca Smith with a backhanded shot a minute in, but the Eagles would have to wait a little longer to get on the board. Fittingly, it was North who scored BC’s first goal of the day. Jillian Reilly pushed the ball in transition and flicked a pass to North. The junior, who finished third nationally in goals per game in 2019, sped by her defender and fired a shot past Smith.

Exactly 26 seconds later, BC was back at it—only this time, it was Jordan Lappin who found the back of the cage. The Morrisville, N.C. native wrapped around the net, got Smith with a fake, and recorded the Eagles’ second goal.

Terriers midfielder Riley Kokoruda received the first of three BU yellow cards. But the infraction didn’t end up helping BC extend its lead. Actually, it led to the Terriers’ first scoring play of the game. Hannah Kenneally danced in front of the 12-meter mark, creating enough space between her and BC defender Morgan Tedeschi to pave her path to goal.

Less than 30 seconds later, though, North—without a running start—ripped a free-position shot by Smith to put the Eagles up 3-1. North was one goal away from another hat trick when BU finally won its first draw. In fact, the Terriers strung together two consecutive faceoffs, which resulted in a pair of Mackenzie Irvine goals separated by 12 seconds. Just like that, it was tied.

BC’s offense began to struggle, much like it did at UMass. The Eagles committed five turnovers in the first 18:45 of play and couldn’t seem to move the ball particularly well. North appeared to be the Eagles’ lone scoring option, with captains Cara Urbank and Sheila Rietano—BC’s top two returning scorers—nowhere to be found in the box score.

Meanwhile, BU tacked on two more goals, stretching to a 4-0 run and taking a 5-3 lead. The Eagles eventually ended their 10-plus-minute scoring drought, thanks to none other than North. The former Blue Devil notched two goals in the span of one minute and 17 seconds to knot the game at five apiece. Neither team broke the tie the rest of the half, although BC had a few chances to go back on top before intermission, including a sequence where an Urbank pass sailed high over Medjid in front of the crease.

Fortunately for head coach Acacia Walker-Weinstein, BC came out of halftime looking like a different team—one reminiscent of the Eagles of years past. BC racked up 21 shots in the final frame—more than double its first-half total— and moved the ball at will. North filled in the shoes of former Eagle Sam Apuzzo by playing mostly behind the cage, both facilitating and scoring. She couldn’t be faceguarded either. In fact, she frequently broke away from BU midfielder Maddie McMaster.

Again and again, the Eagles rolled around the net to find a wide-open teammate in front of the crease for a one-timer. The offense was seamless, as BC scored the first goals of the period and finished the game on a 9-0 run.

BU’s lone goal of the half came in the opening six minutes of the frame: Two Terriers cut inside, opening a lane for Lexi Lewis to drive to the net and whip a shot past BC goalie Rachel Hall. Aside from that, the Oregon transfer and the rest of the Eagles defense was impenetrable.

Medjid kicked off the period with back-to-back goals. Both were a byproduct of the sophomore attacker shaking her defender and posting up near the edge of the crease. Her teammates didn’t miss her, allowing Medjid to piece together two-thirds of her hat trick just minutes into the second half.

North and Lappin spearheaded the Eagles’ 9-0 run, combining to score or assist on eight of BC’s nine goals in that span. Lappin polished off a hat trick of her own, and North tied her career high with eight goals. Perhaps what was most impressive about North’s performance, however, was her passing ability.

Just when it looked as though the game was over, the junior found Cassidy Weeks with one second left on the clock for the Eagles’ 16th and final goal. It was North’s fourth assist. She walked off the field with 12 total points, the most of her career and more than any other Eagle in single-game program history.

BC might not have Apuzzo, Dempsey Arsenault, and Kenzie Kent—three superstars that combined for 881 points during their remarkable BC careers. But the Eagles do have North leading the charge, who on Wednesday, broke a record that even those three never rewrote.