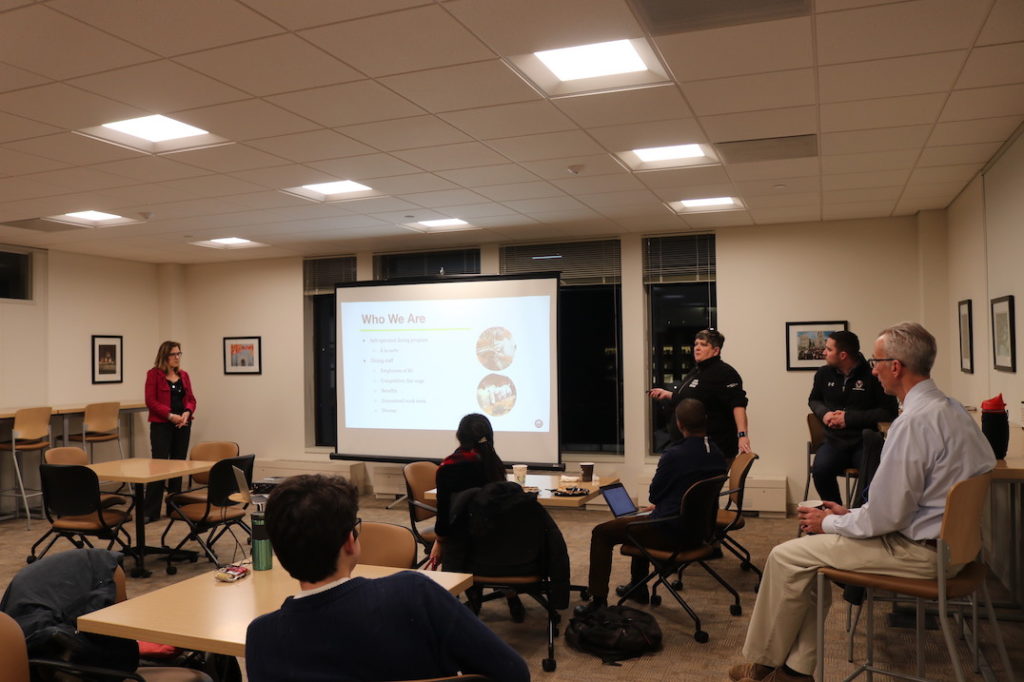 Student-Admin. Forum Focuses on Costs, Sustainability Efforts in BC Dining

Representatives from Boston College Dining Services provided a general overview of their operations in the latest student-administrator forum on Wednesday. They explained BC Dining’s self-operating business model and the rationale behind its payment options before addressing student concerns about various dining issues, such as the cost of meals.

Outside of representatives from The Heights and Michael Osaghae, UGBC president and MCAS ’20, there were seven attendees at Wednesday’s forum. The student-administrator forums are an initiative spearheaded by the Undergraduate Government of BC and Student Affairs in response to the 2018 incident in which former student Michael Sorkin vandalized Welch Hall with racist epithets.

Megan O’Neill, associate director of restaurant operations, reminded those in attendance that BC Dining is a self-operated dining service whose employees are employees of Boston College. She emphasized that BC Dining’s staff receive a competitive, fair wage, a guaranteed work week, and the same benefits as any other BC employee.

“We like to say that [BC Dining’s staff] get the same benefits as your favorite professor on campus,” O’Neill said.

O’Neill said that BC Dining is the most diverse department on campus, with its employees representing 33 nationalities.

“It allows for a lot of opportunities for some culinary changes and opportunities,” O’Neill said. “A lot of our staff speak different languages to the students, and some of them who are homesick in the beginning really appreciate that.”

Addressing BC Dining’s current payment option, O’Neill explained that à la carte dining—which  allows students to take individual food items to go—allows the dining halls to become social spaces. Access to the dining halls does not require a card swipe, O’Neill said, as it would if BC were on the swipe system.

“Dining halls are a great place where a lot of people are studying,” O’Neill said. “You meet there, you get food. We are open to the public. We’re open to students, faculty, staff, anyone.”

The à la carte system also allows students to exercise more control over their money, O’Neill said, so that students can use their money in ways that best suit them.

“We say it’s your money—use it as you want,” O’Neill said.

The BC Dining business model is designed to break even, as it receives no funding from tuition, O’Neill said. The need for an even bottom line has resulted in the two meal plans options: the mandatory residential meal plan—which is required for all on-campus students without kitchens—and the flex meal plan. O’Neill said that most of the money BC Dining relies on for its annual budget comes from the residential meal plan, because money in the flex plan rolls over annually before being returned to the student upon graduation.

“We have to pay all of the bills and all these other great things we talked about with the mandatory meal plan,” O’Neill said. “We think it’s actually pretty fair because it’s 32 weeks, when you figure it out, is roughly $25 a day. It’s usually two meals and a snack give or take.”

Carney’s Dining Room in McElroy Commons will see a slight renovation over Spring Break that will raise more awareness about the program, according to O’Neill.

Each year, BC Dining donates produce to a local food pantry, O’Neill said. It works with smaller charitable organizations and uses its purchasing power to donate large amounts of wholesale goods.

BC Dining usually asks for student input when picking the charity, according to O’Neill. Two years ago, BC Dining picked the Rosie’s Place women’s shelter, and last year it picked the St. Francis House homeless shelter.

“Instead of cash, which is what most people do when they donate, we have better purchasing power than some of these smaller charities, so we work with them directly and ask, ‘What do you need?’” O’Neill said.

One student voiced a concern that some students have financial difficulties when it comes to purchasing food from the dining halls, but they also may have a hard time cooking on their own. The student asked if BC Dining has considered a food stipend that would allow low-income students more access to food.

Beth Emery, director of BC Dining, said that BC Dining is aware of this issue, but financial aid regulations prevent it from providing food stipends to students in need. But, she added, BC Dining tries its best to provide resources for students who may be suffering from food insecurity.

“One of the things we’re really hoping to do for the future is put a teaching kitchen together where we can help people figure out, ‘How do I shop? How do I plan a menu? How do I budget? And then, how do I cook it?’” Emery said.

When one student asked what BC Dining will be doing to provide more authentic food from various cultures, O’Neill explained the difficulties of making food that would be perceived by all as authentic. Each cook has different preferences for how food is prepared, and most traditional food has multiple variations depending on the region, she said. O’Neill cited the pop-up ramen shop—hosted Thursday in conjunction with a ramen shop in Somerville, Mass.—in Walsh Hall as an example of its efforts in this direction.

Another student asked how BC Dining planned to communicate its programs such as the farmer’s market on Lower Campus, the FRESH Demos, and other initiatives. Emery said that BC Dining is in the process of improving its communication efforts, noting that many students don’t want to follow a dining service on social media.

“We were always very careful about sending too many emails, and students told us that last time at the advisory board meeting that they would be totally comfortable if we sent one a month,” Emery said. “Previously, we had thought that one a semester was a lot because you [students] get so much.”