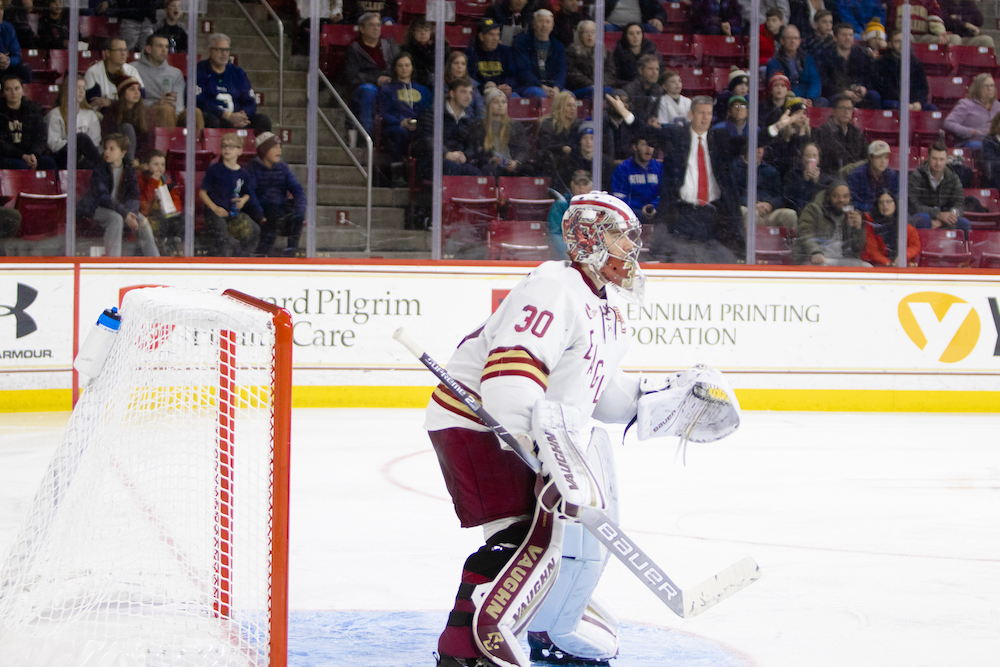 BC Sweeps Weekend Series Against Merrimack

Just four and a half minutes into the first frame, Alex Newhook swung a pass across the Merrimack slot to Matt Boldy, who buried a one-time puck just past Merrimack netminder Jere Huhtamaa. The freshman’s goal marked the start of what became a spectacular performance from Boldy and his classmates, as it was the freshman line that led Boston College men’s hockey to complete a weekend sweep over Merrimack (7-21-3, 5-13-3 Hockey East).

The No. 6 Eagles (19-8-1, 12-6-0) transferred the anticipation of their mid-game ceremony retiring the jersey of Brian Gionta, BC ’01––the program’s all-time leading goal scorer––directly onto the ice, as they took control of the game right from the beginning of the first frame. Boldy’s goal was followed closely by a tally from Newhook as he found a loose puck off Mike Hardman’s rebound and buried it just inside the left post.

Newhook, Boldy, and Hardman registered a total of 10 points for their squad, combining for four goals and six assists. Newhook’s five points marked a career-high and extended his point streak to an impressive six-game stretch, marking the first time an Eagle has scored five points in a game since Johnny Gaudreau (MCAS ’15) and Kevin Hayes (CSOM ’14) both tallied five points against Maine in 2014. Meanwhile, Boldy posted his first multi-goal game while dressed in maroon and gold. Freshman defenseman Mitch Andres even joined in on the festivities, tallying his first career point with an assist on Boldy’s first goal of the night.

“We had some great performances from the freshmen line. … They’re just on fire, they make good plays, they skate hard,” said head coach Jerry York following the team’s victory. “They’re a big plus for us going down the stretch here.”

With the Eagles leading 2-0 at the start of the second period, Merrimack managed to cut its deficit in half after a botched defensive stand from the Eagles resulted in a 3-on-1 toward goaltender Spencer Knight.

Less than 60 seconds later, however, BC managed to extend its lead. Logan Hutsko picked up a clearing attempt from his opponents and found twine from a hard shot in the slot, easily beating Huhtamaa. That tally landed Hutsko his team-leading 17th goal of the year. With his tally, the Eagles were once again ahead by two and showed no signs of slowing down.

As BC continued to pressure Merrimack’s defensive zone, something was bound to give. Huhtamaa made just 15 saves in the game on 21 shots to Spencer Knight’s 24-of-26. Knight has been a force to be reckoned with in the net all season, and Saturday was no different.

Similarly to the Eagles’ second goal of the night, Newhook ripped another shot off the pads of Huhtamaa, which allowed Boldy to finish the loose puck on the right side and close out the middle frame with a dominant 4-1 Eagles lead.

The final frame told the same story as to the previous two: The freshman line shone bright to expand on BC’s already dominant lead. Newhook grabbed his second goal of the night just a minute and a half in, practically guaranteeing an Eagles victory and sealing the deal for the home team. It was coupled by a Julius Mattila short-handed empty-netter after Andres went to the box for interference, and the Eagles flew high into a victory that was practically decided within the first 10 minutes of the matchup.

But as the clock wound down on the Warriors’ power play, the visitors weren’t ready to give up. Regan Kimens tallied Merrimack’s second goal of the night, as the Warriors had a man advantage, but his efforts were all but futile

Add onto all of the Eagles’ offensive power a solid––yet much-expected––24-for-26 performance from goaltender Spencer Knight, and the impressive 6-2 victory places the Eagles in a tie for first place atop the Hockey East alongside in-state rival No. 8 UMass Amherst.

With the Hockey East race being as close as it is during this final stretch of the regular season, the Eagles will need to carry the momentum from this weekend’s series into their double-header series against Northeastern.