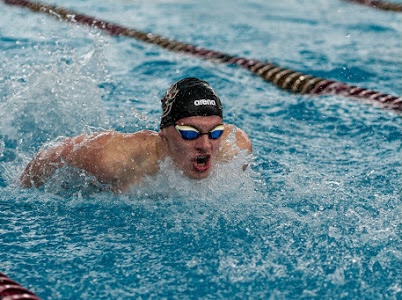 When Sam Roche exploded off the block for the second leg of the 400 freestyle relay, Boston College had about a one-second lead over Georgetown at the Terrier Invitational. As he deftly navigated the churning water around him, that gap began to widen. Going into his second turn, Roche was more than a full body length ahead of the Hoya in second place. When he hit the final wall, his teammate, Michael Hinton, had a three-second advantage on his side.

Such game-changing relay performances have been the story of Roche’s sophomore season on the Heights. He has rotated through all five relays—the 200 and 400 medlies, and the 200, 400, and 800 freestyle relays—consistently throughout the season. His coach looks to him on the relays meet after meet, and his consistent presence has paid off for the team.

At the Terrier Invitational at BU, the only mid-season meet that the Eagles taper for, the team of Roche, Hinton, Max Threlkeld, and Matt Clark were just three-tenths of a second off the school record, one that Roche said the Eagles have a good shot of breaking this season. But his goals are higher than just the one school best: He wants to see his name plastered all across the record board.

“I think this year, on the guys’ side, we can set all five school records in the relays,” Roche said. “I know my coach wants me on the sprint relays, so I’m locked in on those and can file that away.”

Though he’s got plenty of experience on the shorter four relays, the 800 freestyle relay is something new for Roche.

“I didn’t swim that last year—I didn’t have a great 200 free last year,” he said. “But for me, the way to train for that is just a bunch of pacing. My coach gets on me for that, so it’s more about me hitting the pace I’m supposed to every time I do it so that eventually I can not even think about it and just do it.”

Roche’s success as a member of all five ACC Championship-bound relay teams is built on the foundation of his individual efforts. Roche already set the school record in the 100 backstroke last year, and he plans to do it again this year. He was three seconds faster in that event at the Terrier Invitational this year than he was at the same meet in 2018. To add on to his run at BU, he set a personal best time in the 100 butterfly and set two more personal bests in the 50-yard freestyle and the 50-yard butterfly.

But an impressive run in the early part of the season was marred by a surprise loss to Tufts in January, and the team was feeling down on itself.

“They kind of just shocked us at our own pool,” Roche said. “Everyone was kind of upset, head down, wondering ‘What are we thinking?’ But after that, we went out and had three of our best dual meet performances in history. We had guys going times that were close to school records in dual meets.”

Roche attributed the success of the turnaround to the team spirit and the leadership from the upperclassmen on the team, who he said have been a driving force behind the team’s success.

“The seniors and the captains took a huge part in that, being like ‘Just keep fighting. Don’t let us be the same team after this. Come out with a different energy. Just be beasts on deck,’” Roche said. “And we’ve been doing that ever since.”

Part of what’s most exciting for Roche is being part of such a dynamic environment as BC has. With a brand new pool in the Margot Connell Recreation Center, the Eagles have hosted more home meets this year than in the last seven years. And a newly-acquired full staff of coaches to give individual attention to each swimmer has done wonders for the progression of the team, according to Roche.

Michael Stevens, the Eagles’ head coach and BC ’12, has been the head of the program for three years now, and Roche says the swimmers love him. Roche said that with all of the hard work done in the pool, Stevens makes an effort to be a friend to his athletes outside of it.

“We call him Stevies, or Mike, or Mikey Steves, or we just call him ‘Big Guy,’” Roche said of his coach with a smile. “He always brings that lighthearted energy, which is a boost on deck, and it kind of makes us closer because he knows what we’re going through.”

Stevens swam for the Eagles while he was an undergraduate in the Carroll School of Management, so he’s been in a similar position and does his best to empathize, Roche said.

The other bonus of having a full staff on deck for the first time in BC swimming history is an intense amount of individual attention that the swimmers get.

“So it’s a lot higher of a coach-to-swimmer ratio, which keeps everyone on the ball and keeps everyone focused in practice,” Roche said of the larger staff. “I think that obviously builds a closer connection with your specific coach as well.”

Roche, though he was the No. 26 high school recruit in the state of New York his senior year and had an exceptional freshman season on the Heights, has really set his name in stone in the record books of BC swimming in his second year. With the ACC Championships on the horizon, Roche looks to leave it all in the pool.

He and his teammates are on the hunt for yet another record-breaking season—this time in both individual events and relays— and with that dedication comes a unique kind of comradery.

“When you have 60-some athletes who are super focused and really want to get better every day, it brings that energy where we’re playing music super loud and we have a good time in the water, but at the same time we’re getting our work done and we’re doing it well.”