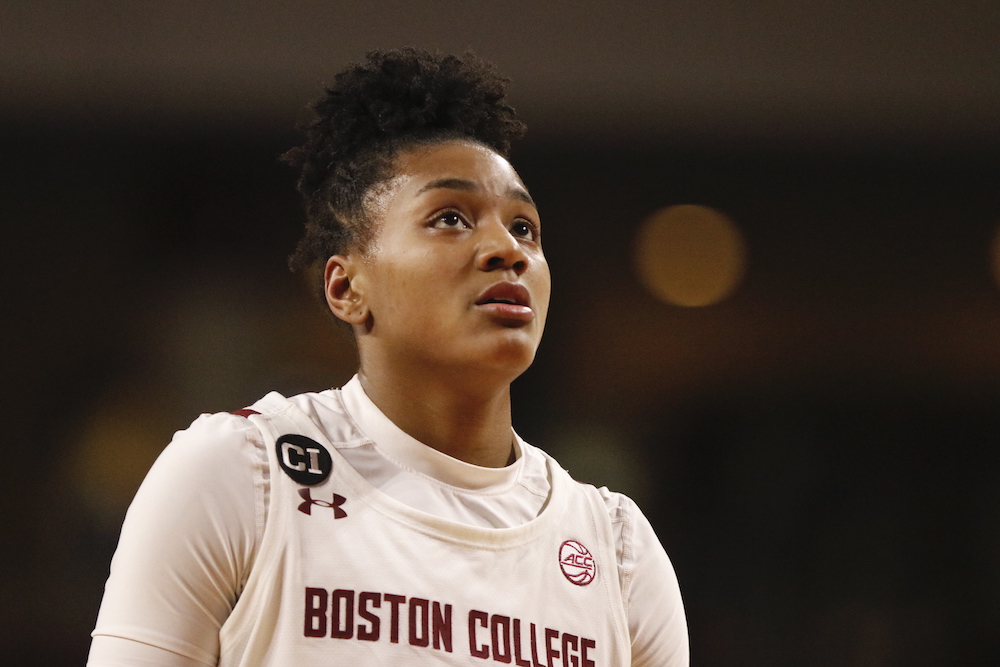 Emma Guy dominated headlines on Thursday, and understandably so. Her buzzer beater capped a 15-point Boston College women’s basketball comeback, as well as the program’s first-ever season sweep of Notre Dame. But the highlight-reel play overshadowed the performance of Taylor Soule, whose 20 points and 10 rebounds put BC in position to complete the come-from-behind victory. On Sunday, though, no one forgot about Soule—well, except the North Carolina defense.

Time and time again, the sophomore slipped past the Tar Heels in transition, locating a pocket of space inside the paint. From there, the rest was history. Soule, who logged 14 points, six rebounds, and one assist in the third quarter alone, shot 11-of-13 from the floor en route to a career-high 29 points. The 5-foot-11 forward also pulled down 12 rebounds, including five offensive boards, tallying her eighth double-double of the year.

Soule helped the Eagles turn a three-point halftime lead into a double-digit victory. BC gassed UNC in the second half, totaling 57 points in the final two quarters, the third-most the Eagles have ever scored in a half. And head coach Joanna Bernabei-McNamee’s team walked away with a 93-75 win, BC’s eighth ACC victory of the year: a single-season program record.

For most of Thursday’s game against the Irish, the Eagles were scraping the bucket on the offensive end of the court. Yet things couldn’t have been more different on Saturday. Sporting their breast cancer awareness jerseys for what was their annual “Pink Game,” the Eagles (15-10, 8-6 Atlantic Coast) jumped out to a 12-5 lead, making five of their first seven shots.

Makayla Dickens knocked down a baseline jumper, Marnelle Garraud hit a 3-pointer from the top of the arc, and both Guy and Soule found success underneath the basket. Unfortunately for BC, it was only a matter of time before the Tar Heels (16-10, 7-8)—who came in with the highest-scoring offense in the conference—started to see the ball go into the bucket. Two quick field goals from Taylor Koenen, and UNC was back within three.

The rest of the half took the shape of a back-and-forth affair. When both teams were on, they were on, and when they were off, things got ugly. The final minutes of the opening quarter featured a sequence of four straight turnovers, three of which were consecutive travel violations. BC struggled without Guy on the court, and Madinah Muhammad gave UNC a 15-14 lead at the free throw line before the end of the period.

Following a tribute to the late Clare Droesch, BC ’05—a former Eagles guard who died of breast cancer in May 2018—BC and the Tar Heels reestablished their offensive rhythm. Running the break and shooting at a high clip, the ACC foes went from one end of the floor to the other, converting field goal attempts at will.

Cameron Swartz drilled a 3-pointer, Soule got an acrobatic tip-in to fall, and Georgia Pineau scored or assisted on six of BC’s first 15 points of the quarter. Meanwhile, Leah Church netted her second triple of the day, and Muhammad joined in on the fun with a 3-pointer of her own. A big piece was missing from the UNC offense, though.

Janelle Bailey, the Tar Heels’ leading scorer, was held scoreless until the 3:04 mark in the second frame. In fact, the 6-foot-4 center only had three turnovers to her name before that point—not even a single field goal attempt. But a couple jumpers and a pair of free throws got the junior onto the scorecard. Taylor Ortlepp and Muhammad traded 3-pointers in the last moments of the half, with BC entering intermission up, 36-33.

Soule came out of halftime with renewed energy. It was noticeable as soon as she stepped back on the floor. The sophomore drove inside for the first points of the third quarter and then, seconds later, batted a UNC pass out of bounds.

“We haven’t always been a third-quarter team,” Soule said. “It’s really important for us to come out firing. And so, if I can do my part and do that, hopefully everyone else will follow behind—and we did that today.”

Soule’s effort level was contagious, as was her offensive efficiency. The Eagles started the third quarter on a 13-6 run and notched 30 points in the period on 11-of-19 shooting. Three of their seven triples came in the frame, while they continued to clamp down on the perimeter on the other side of the hardwood.

UNC, which came into the weekend as the fourth-best 3-point shooting team in the ACC, shot 25 percent from deep in the quarter and 27 percent (6-of-22) from downtown on the day. BC, on the other hand, made a home for itself on the interior. Soule, of course, led the charge with a pair of and-one conversions in the quarter, the second resulting from a move in the post.

BC began the fourth quarter with a 66-54 lead. All of a sudden, however, it appeared as if the momentum was shifting. The Tar Heels kickstarted the period with back-to-back jumpers. Then, thanks to a Garraud turnover, a Koenen layup, and Shayla Bennett 3-pointer, UNC found itself only down 70-64.

Before things got too close for comfort, the Eagles, who assisted on 17 of their 35 field goals, went back to Soule. First Garraud, then Dickens—the two guards pushed the ball in transition on two separate possessions, drawing Tar Heel defenders before whipping a pass to a wide-open Soule in the paint. Soule cashed in, and soon enough BC’s double-digit advantage was restored. No matter the lead, the Eagles never slowed down.

In the game’s waning minutes, Guy piled on the Eagles’ final points in the post. BC ended up outscoring UNC in the paint, 46-22, and rounding out the day with a total of 93 points. To put that in perspective, that mark matches the Eagles’ most points ever scored against an ACC opponent, a record originally set back in 2010-11 in an Eagles loss to Florida State.

While impressive, the scoreboard plays second fiddle to BC’s record-breaking eighth ACC win. During the seniors’ first three years with the program, the Eagles won a total of seven conference games. This year alone, they’ve won eight. But Bernabei-McNamee knows that that’s not all they’re looking for.

“The celebration, especially [for] the three seniors—this is their program to be proud of,” Bernabei-McNamee said. “But again, you can’t be too proud, and you can’t get too excited. … Starting tomorrow, it’s go time. And we’ve got to focus now on the next one.”

With four regular-season games remaining, BC has a shot at a postseason berth. That’s something that hasn’t been said in about a decade.