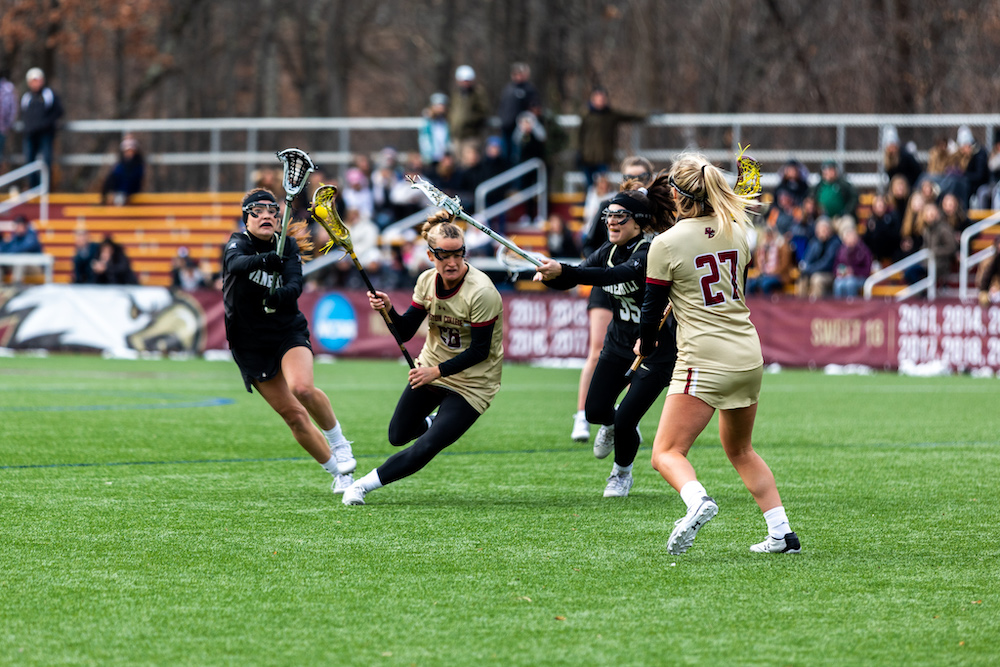 Charlotte North brought herself to center stage last Wednesday after a 12-point performance propelled her team to a dominant 16-6 victory over Boston University. But on Sunday, it was Cara Urbank’s turn––the senior captain’s career-best six-goal performance allowed Boston College lacrosse to take control of what ended up being a tight battle against Vanderbilt.

From start to finish, the No. 5 Eagles (2-1) kept their home crowd on the edge of their seats for the season’s home opener. Neither BC nor the Commodores (1-1) could develop a lead of more than two goals until the very final minutes of the match.

That final stretch, however, became the deciding factor of the matchup, as BC went on a dominant 6-2 run following its earlier 9-10 deficit highlighted by three of Urbank’s six goals. Add in tallies from Jenn Medjid, Hollie Schleicher, and North, and the Eagles’ strong finish provided them with a 15-12 victory, one that marks the program’s 28th-straight home win.

The first frame of play was a rather streaky one, with the Eagles and Commodores alike scoring in lump sums. After Brianne Gross drew first blood three minutes into the first frame for Vanderbilt, the Eagles responded with three strikes of their own––two from Urbank and one from Annie Walsh, both unassisted.

Then, a 4-0 scoring run from Vanderbilt saw the opponents redevelop a lead. Over a 10-minute span, the Commodores took advantage of some softer defensive play from the Eagles, with Gross, Emily Matthewson, and Callie Sundin regaining control of the game.

Three quick goals––two from Jordan Lappin and another one from Schleicher––killed that lead before Vanderbilt could get too comfortable.

Lappin’s sixth and seventh goals of the season came just inside the final five minutes of the frame when BC needed it the most. Her unassisted back-to-back strikes came less than a minute apart.

Then, a free-position opportunity with just 60 seconds left on the clock allowed Schleicher to tally her first career goal as an Eagle, giving her team a one-goal edge over the Commodores heading into the locker room. In a half that seemed to be controlled more so by the opponent, the Eagles relied on their go-to fast-paced offense to keep the game from getting out of their reach.

Vanderbilt opened up the second half with a goal from Griffin Gearhardt, but the Eagles top two goal scorers for the evening––Urbank and Medjid––both found the back of the net to further push BC’s lead. The two teams found themselves trading an equal amount of back-and-forth opportunities, with several lead changes throughout.

Midway through the second frame, however, a pair of Vanderbilt goals allowed it to regain a temporary 10-9 lead. But the Eagles made sure the lead would be short-lived––a mere 20 seconds long, to be exact.

Urbank’s fifth goal of the evening provided the spark for a dominant 6-0 scoring run for the closing half of the match. Her tally was coupled by the offensive power of teammates Medjid and Schleicher, who all collectively contributed to the scoring run that locked in the victory.

During that final stretch of the game, the Eagles saw five different players register points. Charlotte North’s 12th goal of the season iced things up for the Eagles, making the Commodores’ final two strikes rather meaningless. In total, seven Eagles were able to submit their names onto the scoresheet by the time the final buzzer rang.

Adding onto all of the aforementioned offensive power would be an 11-save performance in between the pipes from Rachel Hall, as the Oregon transfer’s strong presence fended off the Commodores’ offense en route to the 15-12 win. Hall tallied double-digit save performances for the second straight contest, proving vital to BC’s recent success.

BC will look to carry the momentum from its pair of victories all the way over to the West Coast, as it hits the road for a draw against No. 16 USC. Facing its first ranked opponent of the season will provide BC with the opportunity to prove itself as a top-tier competitor.