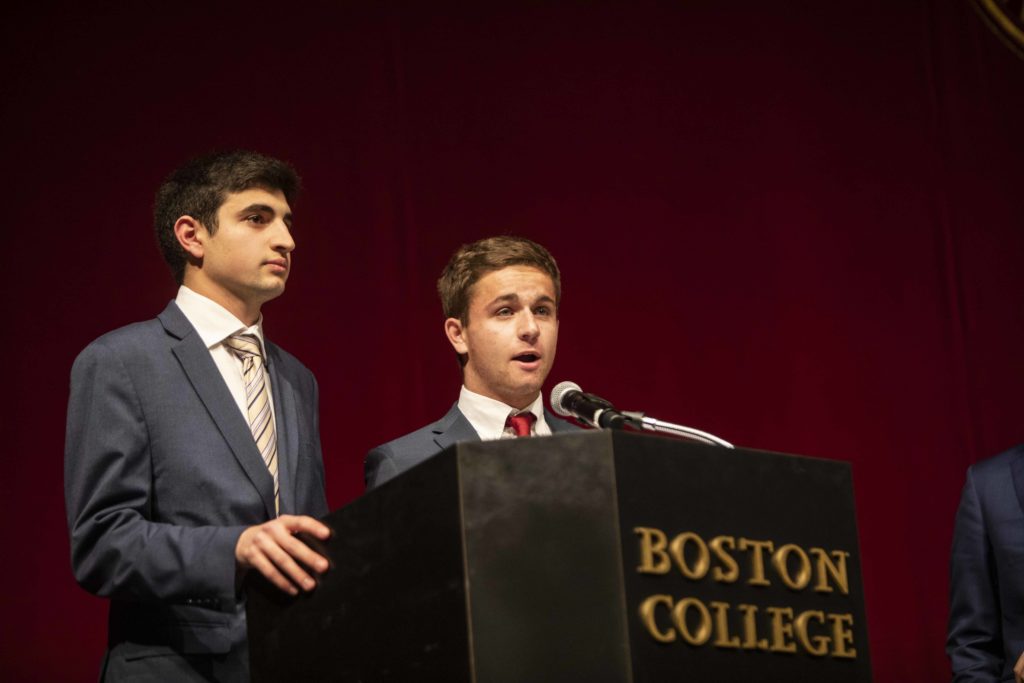 Since Christian Guma, CSOM ’21, and Kevork Atinizian, CSOM ’22, were elected Undergraduate Government of Boston College president and vice president last Tuesday, they have begun meeting with administrators and called Lyft to work on implementing discounted rides for students. Guma and Atinizian will be sworn in on April 29, at which point they will have chosen a cabinet and begun working on some of their key policies.

Uber and Lyft discounts, transparency in UGBC, a University LGBTQ+ resource center, and improved mental health resources on campus are Guma and Atinizian’s top four policy areas. Guma said he called Lyft again the day after he was elected to further discuss his proposed Uber/Lyft discounted ride program. The program, Guma and Atinizian said during the campaign, would be funded at least in part by the traditional executive stipends that he and Atinizian are not accepting.

Guma and Atinizian doubled down on their promise to present a concrete plan for an LGBTQ+ resource center to Vice President of Student Affairs Joy Moore on day one of their administration.

If the administration rejects the plan, however, Guma and Atinizian said they would look into establishing an LGBTQ+ resource center in a UGBC office in Carney Hall.

Guma and Atinizian have met with several senior administrators in the six days since their election to work on developing relationships and begin planning out their administrative priorities.

“I spoke with [Associate Vice President for University Communications] Jack Dunn and Dean [Tom] Mogan, Samantha Gordon with ResLife,” Atinizian said. “Just casually seeing people and saying, ‘We look forward to working with you over the course of this year.’”

Guma and Atinizian highlighted marketing as a major skill they will use to push their policies and engage the student body with UGBC. Guma specifically cited his team’s campaign, saying their marketing efforts—including videos, graphics, and general outreach—reached out to groups of people who UGBC hadn’t previously engaged.

“When I was walking around talking to people from the very beginning of the campaign to the very last day, the thing that I heard the most was ‘I’ve never voted before,’” Guma said. “Our message, especially dealing with the stipends, was appealing to a group of people that had never been engaged in BC before.”

The marketing skills that helped Guma and Atinizian win the election, they said, will also help them with their roles in UGBC. One of their top policy priorities, mental health, includes both increasing resources for University Counseling Services and other initiatives as well as improving marketing for current resources, such as Lean On Me and WellTrack.

“If you were to go up to someone and say, ‘Do you know the mental health resource on campus,’ they would obviously know to call UCS, but they don’t know individual programs like WellTrack,” Atinizian said.

Guma added that he believes these marketing skills would be useful in addressing low attendance at student-administrator forums and other UGBC events designed to encourage communication on campus.

“I think a lot of people are almost desensitized to all the stuff that they see,” Guma said. “They get the UGBC email and they probably delete it or look through it quickly. So we want to make it engaging, make ourselves eminent as much as possible. And, again, that’s something that we did really well in the campaign. We were great with graphics, great with photos, great with videos.”

The UGBC budget traditionally allocates $19,500 to members of the executive branch—$4,000 to the president, $3,500 to the vice president, and $2,000 for cabinet members. Defenders of the stipends have argued that this affords low-income students who would otherwise need to work the opportunity to serve in time-intensive roles. Guma and Atinizian said that because they have the socioeconomic ability to not accept the stipends, they want to use this money for other UGBC initiatives.

Guma and Atinizian are also seeking other structural changes to the UGBC budget in addition to their policy priority of transparency within student government. The fall UGBC retreat and UGBC apparel for its members, Atinizian said, are areas where UGBC could be spending less of its funds. UGBC recently put out a new webpage, Atinizian said, that includes senators’ voting records, a transparency policy Guma and Atinizian campaigned on. But they still think there are ways the organization could be more transparent—such as by publishing the budget.

“If you go in OSI, there’s boxes of extra sweatshirts and sweatpants,” Guma said. “It’s things like that. It’s no disrespect, but we think we can probably do a little bit better.”