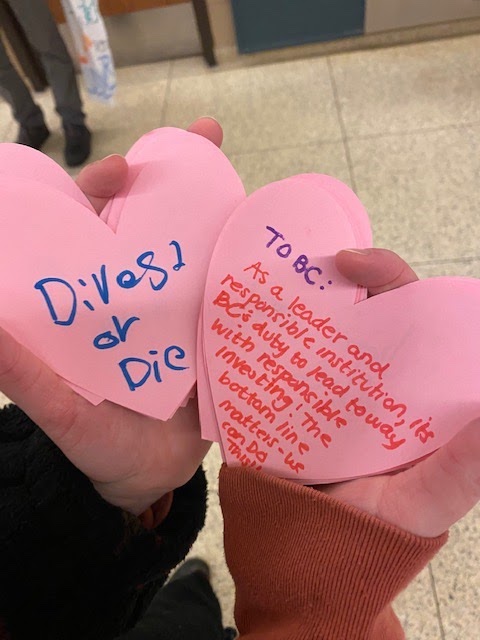 Members of Climate Justice Boston College participated in national Fossil Fuel Divestment Day (F2D2) last week. After a protest across from St. Ignatius Church, the group delivered a comprehensive list of demands to administrators calling on BC to take various actions in the face of climate change. In response, Associate Vice President for University Communications Jack Dunn issued a statement to The Heights saying that the University remains opposed to divestment.

Students at 57 other universities, including seven Jesuit institutions, also took part in the F2D2 campaign focused on “breaking up with fossil fuels” the day before Valentine’s Day. The protest took place a week after Georgetown University announced its plans to divest from fossil fuels.

In addition to the creation of a committee to evaluate BC’s investments in the context of Jesuit values, CJBC’s list of demands called for BC to create a formal climate action plan, reject all funding from the Koch Foundation, and commit to not pursuing litigation concerning Webster Woods. The petition also urged the University to release a public statement acknowledging “human-caused climate change as a major social justice and pro-life issue” that would be signed by University President Rev. William P. Leahy, S.J.

At the protest, a CJBC member said that the event was intended to bring attention to fossil fuel investment at BC and call for the University to divest. After delivering short speeches about Fossil Fuel Divestment Day and BC’s role in climate justice, the CJBC members marched to Leahy’s and other administrator’s offices to deliver the list of demands and a copy of Pope Francis’ encyclical on the environment, Laudato si’.

The group members also delivered valentines written by over 100 students and faculty who had stopped by their table in McElroy Commons beforehand, a member of CJBC said, to write their thoughts concerning divestment and climate justice on the cards.

Kyle Rosenthal, a member of CJBC and CSOM ’21, said that the students were not invited into Leahy’s office after presenting the items to a staff member. The protesters then delivered the rest of the valentines at other administrative offices.

In an emailed statement to The Heights, Dunn said that the University rejects the call for divestment, which the University views as ineffective and inconsistent.

“Calling for divestment from fossil fuel companies seems inconsistent and contradictory, given that Boston College and other institutions and businesses are dependent on oil and gas for everyday energy needs, and likely will be for the foreseeable future,” part of the statement reads.

The statement also said that the endowment is intended to provide continuing financial support for the University, and investments are done within certain guidelines not intended to promote social or political change.

“The University’s position is that the best way to respond to the important issue of climate change is for all members of the BC community–along with corporations, organizations, and individuals–to reduce energy consumption and promote sustainability,” it said.

The statement also cited BC’s silver rating in sustainability from the Association for the Advancement of Sustainability in Higher Education, as well as BC’s recognition as one of 30 colleges and universities in the association’s Sustainable Campus Index.

“During the past decade, Boston College has allocated millions of dollars for more efficient campus lighting and HVAC systems, constructed LEED-certified buildings, and worked to ensure that 100 percent of electricity used on campus now comes from renewable energy sources,” the statement said.

CJBC staged the protest to “show support and unity behind fossil fuel divestment by students, faculty, and alumni; to highlight the culpability of fossil fuel companies in climate change and ecological destruction and that it’s immoral for our institution to invest in them,” according to a press release.

The CJBC petition said that if the University does not issue a public response or indicate intention to meet with the group, it will begin engaging in “near-constant” protests, hunger strikes, and die-ins.

“Failure to publicly respond with the intention of creating a formal plan to meet and adequately address these goals by February 27, 2020 will serve as a renunciation of our Jesuit, Catholic values and will force students, faculty, alumni, and community members to begin an open, nonviolent disruption of business as usual until climate justice is achieved,” the CJBC petition reads.

Last year, a non-binding referendum on the Undergraduate Government of BC election ballot asking students if the University should divest passed overwhelmingly. Dunn told The Heights at the time that BC did not see divestment as a “viable solution” to climate change, and again pointed out BC’s other efforts to promote sustainability.