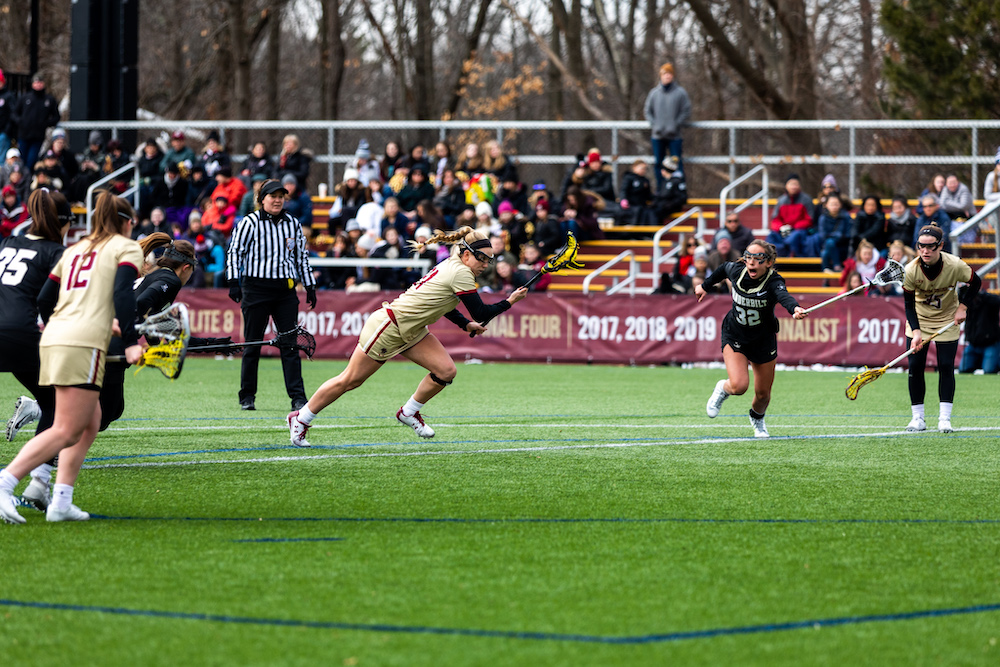 If there’s one thing Boston College lacrosse isn’t used to doing, it’s losing—especially twice in one year, and especially to Southern California. But after going undefeated through the regular season over the last two years, No. 15 BC tasted defeat for the second time this season against its first ranked opponent in No. 13 USC.

The loss marks the first time the Eagles (2-2) have ever fallen to the Trojans, as the all-time series currently sits at 5-1 in favor of the Eagles.

On numbers alone, it’s clear that USC simply outmatched the visiting Eagles. The Trojans led in shots (38-28), saves (11-8), and ground balls (17-15), and had fewer turnovers (12) than their opponents (15). In fact, the only notable category the Eagles led in was draw controls, but they only narrowly edged their opponent in that category by one draw.

BC opened the scoring early on after Jenn Medjid grabbed a ground ball and was immediately fouled by USC’s Morgan Kuligowski. Medjid headed to the free position and deftly wove around USC goalie Riley Hertford to score her ninth tally of the season.

But USC was quick to counter, as neither of the two powerhouse teams was used to being at a deficit for too long. The Trojans cleared a long ball, followed closely by Katie Ramsay’s first goal of the season to tie up the game six minutes in.

A tally each from USC’s Hope Anhut and BC’s Charlotte North kept the game deadlocked, at two, then Sophia Donovan and North traded one to bring the score to three apiece. It looked as though the teams were gearing up for a back-and-forth battle for the ages.

But USC had other plans on its home turf. Six unanswered goals by four different Trojans in the span of four minutes effectively sealed the win for USC with 10 minutes still left in the first half of the game.

BC tried to stop the bleeding as Medjid recorded her second of the night, but her efforts were futile as the Eagles found themselves in a five-point hole. Five was not as far as they would fall though, as USC’s Sophia Donovan notched two more before the end of the half.

Ramsay earned herself a yellow card in the final minutes of the half, giving BC a much-needed man advantage and a free-position chance. With the Eagles down by seven, North seized her opportunity and powered one past Hertford to send the Eagles to the locker room down by just six.

But six was as close as the Eagles would get for the rest of the night, and a dominant second half for USC handed the Eagles their biggest defeat in the last three years.

Anhut and Emily Concialdi opened the second-half scoring for the Trojans with two back-to-back goals. North followed with her fourth and final of the night a few minutes later, but the Trojans had once again advanced their lead.

Two more USC goals kept the pattern going, but this time, BC countered with two of its own. Medjid notched her third and final goal of the night on another free-position shot. Kate Taylor followed her up with an assist from Medjid to round out her four-point night.

The Trojans and the Eagles traded their final two-and-one scoring bout as Cara Urbank followed two USC goals with one of her own. Urbank, who had a standout game in the Eagles’ previous matchup against Vanderbilt, was uncharacteristically quiet on offense against the Trojans.

Concialdi finished off the scoring for USC in the final minutes of the game to send BC home with a loss and a .500 record.

Though the scoreline doesn’t show it, BC did an impressive job of shutting down USC’s offensive weapon Kerrigan Miller, an All-American and two-time Pac-12 Midfielder of the Year. Kerrigan went without a goal for the first time this season, but a balanced Trojan offense was enough to down the reigning national runners-up.

Eight Eagles Score in Dominant Win Over Huskies
Go Figure: What Will it Take for the Eagles to Make the NCAA Tournament?