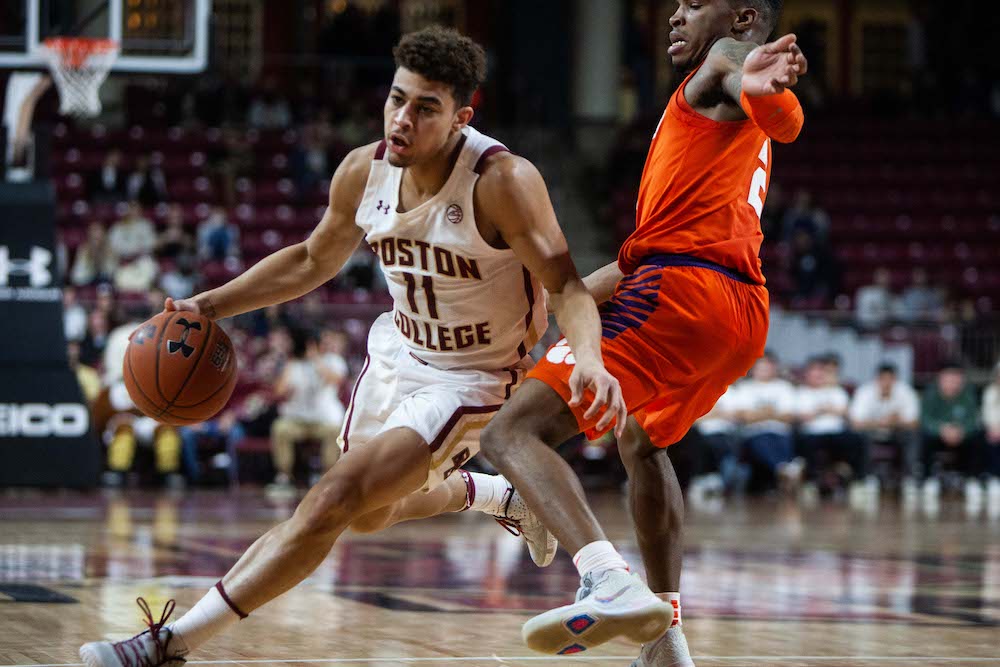 Coming off a 13-point loss to Virginia, Boston College men’s basketball looked to bounce back at home against ACC rival Clemson. A victory would have brought the Eagles to .500 on the season and bumped them to seventh in the conference. But the Eagles couldn’t connect, and an impressive shooting performance from Clemson meant they fell 82-64 to the Tigers under their home lights of Conte Forum.

After a lackluster start to the game, BC’s first basket came off a 3-pointer by senior Jairus Hamilton with 16:35 left in the half. That basket then opened up a quick scoring run for BC, starting with a 3-pointer by Jay Heath followed by a breakaway layup to get the game within four points at 14-10.

A combination of some sloppy turnovers from the Eagles and a lack of size compared to Clemson’s big lineup hurt the Eagles late in the half. Clemson was able to match BC on almost all of its scoring plays to maintain the lead.

Big man Aamir Simms dominated BC on the boards and closed the half off with a thunderous last-second follow-up dunk. The junior is shooting an astounding 45.1 percent from the field this season and was a major factor in the Tigers’ win with 12 points. The only Tiger to outscore him was Al-Amir Dawes with 22.

Clemson also won the battle of the boards, largely with the help of its height under the rim, tallying 32 rebounds to BC’s 25. Twenty-eight of the Tigers’ grabs came on defense, and Simms and John Newman III combined for 19 of them. Meanwhile, Steffon Mitchell led the way on the boards for the Eagles with seven—three on offense and four on defense.

After an uninspired first half, BC trailed 29-41 heading into the second half. The Eagles played well on defense in the paint in the second half and caused several Clemson turnovers resulting in 10 of their points.

Unfortunately for BC, the second half started off exactly the same as the first. The Tigers came out shooting hot: A pair of triples and a jump shot extended Clemson’s lead to 20 just two minutes into the half. Clemson continued to dominate from long range for the majority of the second half.

BC’s Nik Popovic managed a couple of baskets under the rim for the Eagles, including a nice turnaround hookshot over Clemson’s center. Even so, BC found itself down 26 with 8:40 left in the game with the lopsided score at 42-68.

Heath, who led the Eagles in scoring with 16, was able to come up with a pair of 3-pointers late in the game to try to revive any hopes of getting back in it. Hamilton followed that up with an and-one to cut the deficit to 20, but it wasn’t enough for BC to stage a comeback.

Clemson easily matched all of BC’s scoring efforts to maintain a healthy cushion over the Eagles for the remainder of the game. Even when the Eagles switched to a full-court press with a few minutes left to try to salvage the game, it just led to them getting into foul trouble and putting Clemson on the line in the bonus. With 3:45 left in the game, Clemson freshman Alex Hemenway put the nail in the coffin, hitting a straight away 3-pointer to put the Tigers up 23.