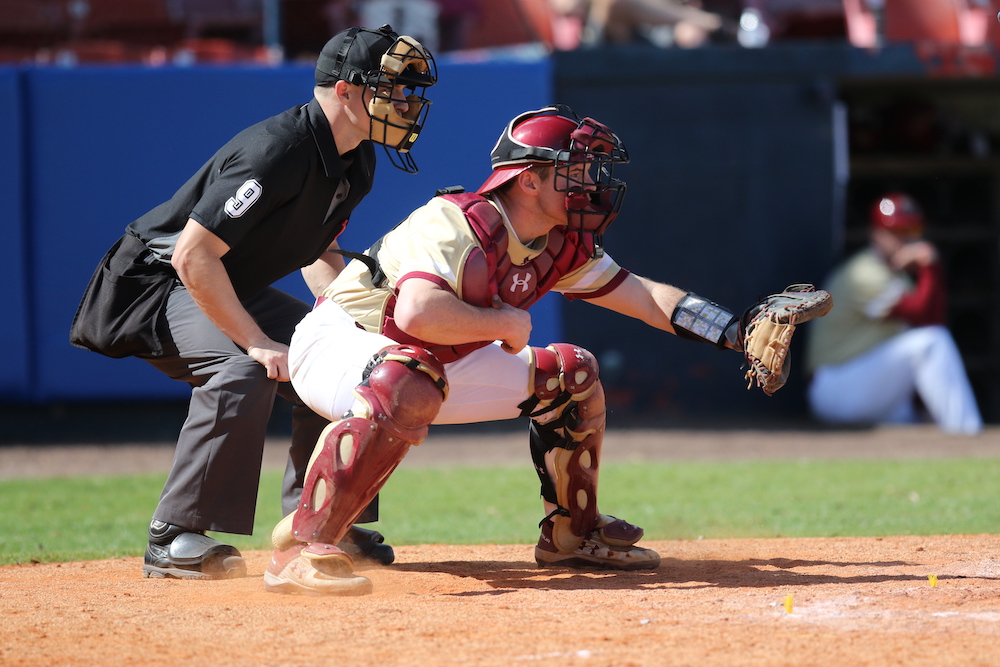 The Eagles are no strangers to weekend sweeps. Last season they lost in straight games to then-No. 12 North Carolina and went 2-for-3 in multiple weekend series over the course of the season. And in its disastrous 2018 campaign, BC was swept by Clemson, Wake Forest, Florida State, and Miami. And yet this year it’s different.

Going into this season, the Eagles looked to be more promising than they had the year prior, and their performance against NIU last weekend seemed to show how the hype was not unwarranted. But as the Eagles (3-4) faced their first challenge of the season in the form of No. 8 Arizona State (5-3), they failed to overcome the adversity, ultimately falling 0-3 on the weekend to the Sun Devils.

Unlike their previous series against NIU, the Eagles only played three games against the Sun Devils, giving them more time to prepare in between their Saturday and Sunday matchups. But despite this extra time in between games, BC was unable to conjure up a different result than before.

Just as they had done in the two games prior, the Sun Devils scored runs in the first inning to secure the lead over the Eagles. Spencer Torkelson, Gage Workman, and Trevor Hauver each made it home in the first, putting ASU up by three points. And similar to before, the Eagles were unable to come back against the Sun Devils.

Sal Frelick scored a run in the third inning to cut ASU’s lead to two, but the Sun Devils quickly regained their original lead, as they quickly responded in the bottom of the third with a run of their own. The Eagles, however, managed to tie up the game in the fifth inning. After walking to first, Frelick scored his second of the game and was quickly followed by Brian Dempsey and Cody Morissette.

When Joey Walsh returned to the mound for the bottom of the fifth, the Sun Devils were ready for him. Walsh walked Hauver, who quickly found his way to third base with one strike remaining. Nathan Baez hit a grounder to Morissette at third base, who made a throwing error, allowing Baez to make it to second and Hauver to run home.

For the second night in a row, the Eagles struggled to score against the Sun Devils. After the Eagles were shut down with three outs on three hitters in the first, ASU went to bat and quickly reasserted its dominance. The Sun Devils secured the first run of the game as Torkelson homered to center field off a pitch from Joe Mancini.

But after Torkelson’s initial tally for the Sun Devils, the game went quiet. Over the course of the next four innings, only eight players got on base for either team, three of whom were walked. That changed, however, when the game went to the sixth inning. Frelick hit a homer out to center field, tying up the game at one. Morissette soon got on base off a single before advancing to second when teammate Jack Cunningham singled to right field. Luke Gold was tapped out at second base after his hit, but collected the RBI as Morissette made it home to put the Eagles up 2-1.

The Sun Devils quickly turned the game around, scoring four runs of their own in the bottom of the sixth to regain the lead. Hunter Jump scored a homer off the first pitch of the inning, and Drew Swift soon joined him, scoring off a wild pitch. Hauver singled to center field, but his hit was enough to send Torkelson and Nick Cheema home as ASU captured the lead from BC. The Sun Devils scored twice more in the seventh as Brian Kalmer and Swift both made it home.

BC managed to score two more runs in the eighth inning, as Morissette and Joe Suozzi found home, but another tally by ASU in the bottom of the eighth solidified the game’s outcome in the Sun Devils’ favor.

In their first matchup against the Sun Devils, the Eagles had a lot to prove. It was only their second weekend of the season, and they already had their first series against a top-25 team. Despite its high ranking, ASU had not proven itself to be a highly skilled opponent in its opening weekend, going 2-3 against Villanova, Michigan, and Oklahoma State.

Dempsey began the top of the first strong for the Eagles, securing first base after Frelick struck out swinging. Each of the next BC hitters made it on place, giving the Eagles an easy run to start the game. But after Dempsey scored, BC couldn’t get another player home, as Lucas Stalman struck out, sending the Eagles to the field.

Mason Pelio started on the mound for the Eagles, looking for a repeat of last week’s performance against NIU. BC could only strike out one ASU hitter before its demise began. One hitter ran to second, and Pelio walked another, then the Sun Devils’ third baseman hit a home run, sending all three players home. The bases would become loaded once more, giving ASU a chance to advance its score, but the Eagles got Cheema out at second base, halting the first inning at 3-1 for the Sun Devils.

The Eagles returned to bat determined to even the score. But excellent pitching and fielding by the Sun Devils stopped the Eagles at second base, keeping them from tying up the game. When BC went back out to the field for the bottom of the second, it was ready for ASU. After ceding three runs in the first inning, Pelio struck out back-to-back ASU hitters and a third grounded out at third base, keeping the Sun Devils scoreless in the second to give the Eagles an opportunity to come back from their deficit.

The Eagles scored twice more to tie the game in the third inning, as Cunningham and Gold made it home off RBIs from Peter Burns and Dante Baldelli. And when the Sun Devils were unable to respond when the Eagles went out to the field, it looked as though the game would be much closer than expected. But two home runs and a triple turned run put the Sun Devils up by four points.

Frelick scored one more run for the Eagles in the top of the sixth inning, but at that point, it was over. The Sun Devils tallied three more runs in the seventh, decisively ending the first game of the series.