Home » Notebook: Struggles on Both Sides of the Ball Continue for BC 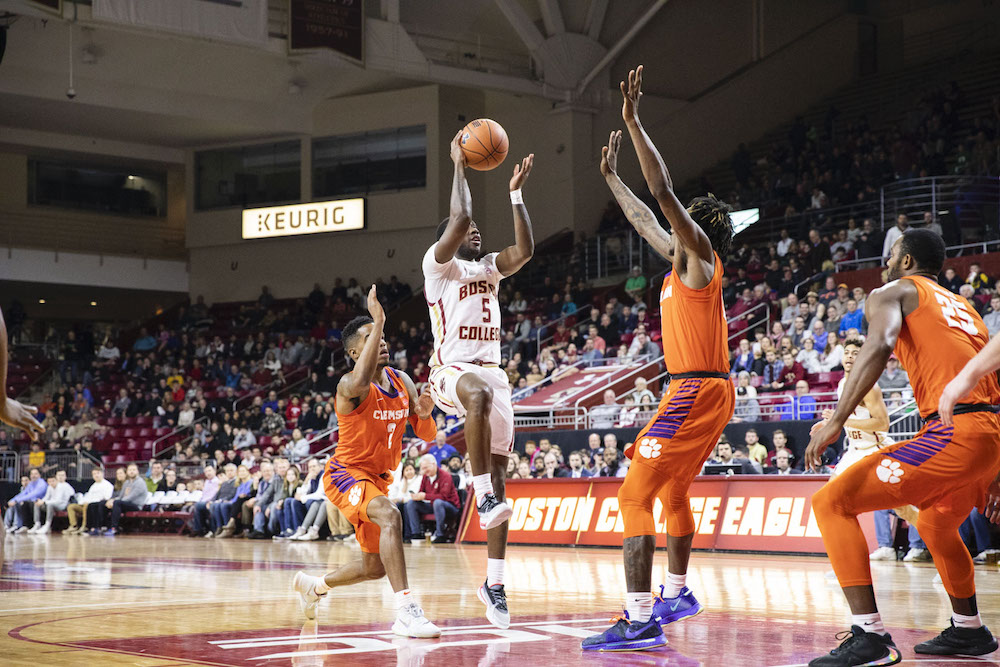 Notebook: Struggles on Both Sides of the Ball Continue for BC

Saturday evening marked Senior Night for Boston College men’s basketball. All three of the team’s seniors, Jared Hamilton, Nik Popovic, and Matt DiLuccio, were given starting nods following the pre-game ceremonies. But the team’s performance on the court quickly became one that the players wanted to forget, as the Eagles (13-15, 7-10 Atlantic Coast) fell to the Clemson Tigers (14-12, 8-8) by a score of 82-64 for their second straight loss.

The Tigers came out strong, scoring 10 points before the first Eagles basket. The momentum stayed with Clemson for the entire night, as the Eagles were never able to take a lead after falling behind 10-0. Every single shot seemed to go down for the Tigers, and every BC basket was quickly answered. Though the Eagles tightened the gap late in the second half, the game was already too far out of reach. The matchup marked Clemson’s ninth straight victory over Boston College, with the last Eagles victory coming in 2013.

Here are some key takeaways from the defeat:

Horrific Start to the Game Took the Eagles Out Quickly

The Eagles came out of the gates completely flat, giving up two wide open threes in the first minute, forcing head coach Jim Christian to use one of his timeouts early. Just two and a half minutes into the game, the Eagles still found themselves without a basket, down 10-0.  Though they eventually saw themselves only down 16-12, Christian knew his team did not have their typical effort level right from the very start.

“We didn’t have effort tonight,” Christian said following the loss. “We just came into the game and didn’t have the effort we normally have. It’s been inconsistent, especially on defense … right from the first play of the game when they got an uncontested three on a simple closeout. We never give it up. That set the tone for me for the whole night.”

Clemson’s Al-Amir Dawes Lit It Up From Deep

The Tigers’ freshman point guard Al-Amir Dawes was the night’s leading scorer, finishing with a career-high 22 points. Though he was not dominating the ball, Dawes found himself open all night long, scoring eight baskets, with six of them coming from behind the arc.

“I think [Dawes] was a benefactor of good offense,” Christian said when asked on the play of the Clemson point guard. “He was open five times in a row at the top of the key. He’s a good shooter. He’s played really well.”

Dawes scored 13 of his points in the first half, greatly contributing to the Tigers’ early and dominant 12-point lead over BC. His eight field goals and six 3-pointers were career-highs, improving upon his previous record of seven field goals made and three 3-pointers from earlier this season.

BC Defense Couldn’t Shut Down the Tigers

In addition to the fact that they played subpar themselves, the Eagles clearly ran into a hot Clemson team. With a week to prepare, Clemson’s head coach Brad Brownell had his squad completely ready for the game in Chestnut Hill. From tip-off, it was clear that the Tigers had the upper hand over the Eagles. Clemson picked up an early lead over BC, securing 10 unanswered points early in the first half, and limited the Eagles’ chances throughout the contest.

The Tigers were efficient in their shooting, scoring on 68.9 percent of their field goal attempts with 52.2 percent of their shots from 3-point territory. Five Clemson players finished in double digit scoring, led by Dawes and junior Aamir Simms, who posted 12 points.

BC Offense Struggled to Connect

Everything went wrong for the Eagles on the offensive end of the ball on Saturday. Even though they may have scored more than in their blowout loss in Miami on Feb. 12, the Eagles were very inefficient. The Eagles were 23-61 from the field, giving them a field goal percentage of 37.7 percent. Their play from the 3-point line was dreadful as well, with the Eagles finishing 7-26 from deep, a percentage of 26.9 percent.

The Eagles have scored over 70 points just once in their last four games, with that one game in their thrilling victory over NC State on Feb. 16. With a huge game against Notre Dame coming up on Wednesday night, the Eagles will need to be much more efficient to have a fighting chance.

Heath Led the Eagles on the Scoresheet

Despite the loss, freshman Jay Heath continued his strong play for the Eagles. The freshman broke double-digit points for the 11th game in a row, with 16 points on the night and nine of those 16 points coming from beyond the arc.

Heath has had a spectacular first season, consistently leading in total points and 3-point shooting for the recently struggling Eagles team, and he’ll look to be an integral part of Christian’s squad next season.