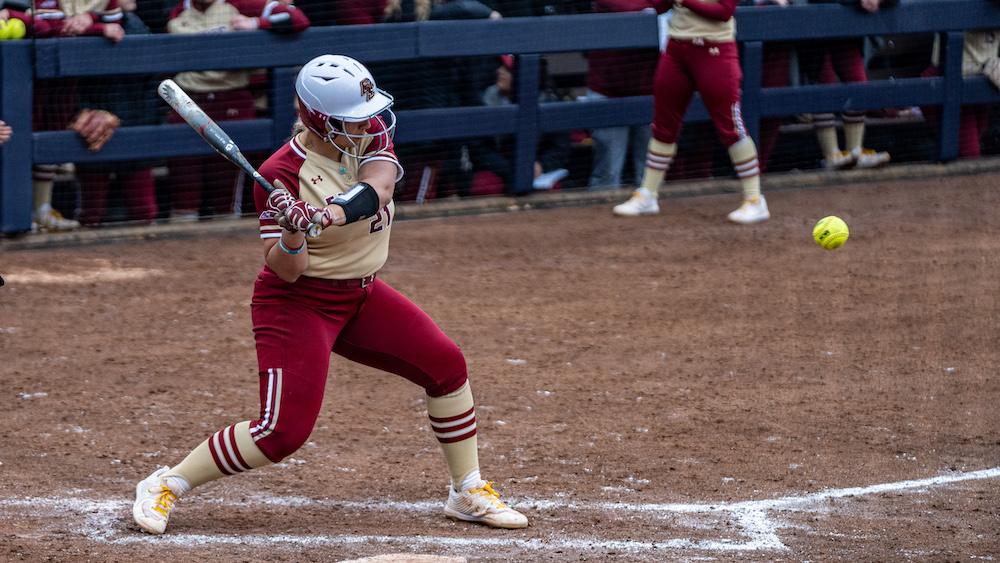 Boston College softball has struggled to open the season, failing to reach a .500 winning percentage in its opening two tournaments. The Eagles’ pitching has been a bright spot for the team, compiling a team ERA of 1.82, but the offense has struggled to consistently put runs on the board.

For its third tournament of the season, BC traveled to South Carolina to play in the Gamecock Invitational. Though its pitching failed to live up to its earlier performances, the Eagles managed a 2-2 record on the weekend and moved to 5-8 on the season. Susannah Anderson was a workhorse for BC, pitching in every game, though she failed to match the heroics she has already shown multiple times this season.

Pitching in her fourth game of the tournament, Anderson struggled against Iowa State, giving up four earned runs and allowing 14 baserunners in 6.1 innings of work. Despite the loss, the Eagles put up a gritty performance against a Cyclones team that was dominant over the weekend, crushing No. 8 Michigan 5-1 and blanking Elon 10-0. Iowa State got off to a hot start, jumping out to a 2-0 lead after two innings on an RBI single from Logan Schaben and a wild pitch from Anderson that scored Kasey Simpson. BC responded in the third, as leadoff hitter Ellie Mataya started the frame with a single. Jenna Ergle followed up with another single, and both runners advanced on a fly out from Emme Martinez. Successive singles from Kristen Giery and Djhane Valido scored both runners, tying the game. After the Cyclones scored a run in both the fifth and sixth innings, Gianna Boccagno tied the game with a two-run homer. Iowa State took the lead again in the seventh, eking out a run with impressive small-ball tactics. Schaben opened the frame with a single, stole second, and then advanced to third off a sacrifice bunt. Mikayla Ramos brought her home with a single, prompting a pitching change to replace Anderson on the mound for the first time in the tournament.

Although the Eagles’ offense disappeared for most of the early parts of the game, BC’s hitters showed up when it mattered most, scoring all five of its runs in the last two innings to muscle past the Phoenix. Peyton Schnackenberg started on the mound for the Eagles but was knocked out in the third inning after Megan White smoked a two-run double. Haley White didn’t fare much better for BC, giving up an RBI single to the first batter she faced, and Elon took a 3-0 lead. The Eagles managed only three total baserunners in the first five frames. BC finally broke through in the sixth, tying the game off a home run from Ergle and a single from AJ Alatorre that scored a pair. The Eagles’ offensive outburst continued in the final frame, scoring another two runs off an RBI single from Martinez and a sac fly from Giery. Anderson, the Eagles’ third pitcher of the night, dominated Elon in the final two innings, striking out four and allowing no baserunners.

Anderson turned in a masterful performance against the Flames, pitching a complete game and only allowing two hits. BC’s offense was largely quiet as well, though it did not end up mattering due to Anderson’s dominance. The Eagles loaded the bases in the first inning but failed to score after Gianna Randazza struck out. Jenna Ergle opened the scoring in the third with a solo homer. BC failed to get on base for the next three frames but put a pair of insurance runs on the board in the top of the seventh off a two-run double from Alatorre. The extra cushion ultimately proved unnecessary, as Anderson shut down Liberty in its last at bats and closed out the game on top.

Katie Prebble doubled to left centerfield, scoring Mackenzie Boesel, and the tournament hosts walked off against the Eagles in extra innings. Anderson pitched a complete game but failed to equal her usual dominance, allowing 15 baserunners. Ergle put the Eagles on the board first, hitting a solo home run in the third. The Gamecocks got a baserunner to third in both the first and second inning but failed to break through until Lauren Stewart brought Haley Simpson home with an RBI single in the fifth. BC took the lead again in the seventh off a double from Giery, but South Carolina responded in its part of the inning, tying the game off another RBI from Stewart. The Gamecocks seemed poised to score again, but Anderson got a double play off Jordan Fabian to end the threat, and the game went into extra innings. BC failed to muster any offense in its part of the eighth, and Prebble took her chance to wrap it up for the hosts.

Eagles Continue to Shine in ACC, Defeat Miami 75-64
Notebook: Struggles on Both Sides of the Ball Continue for BC