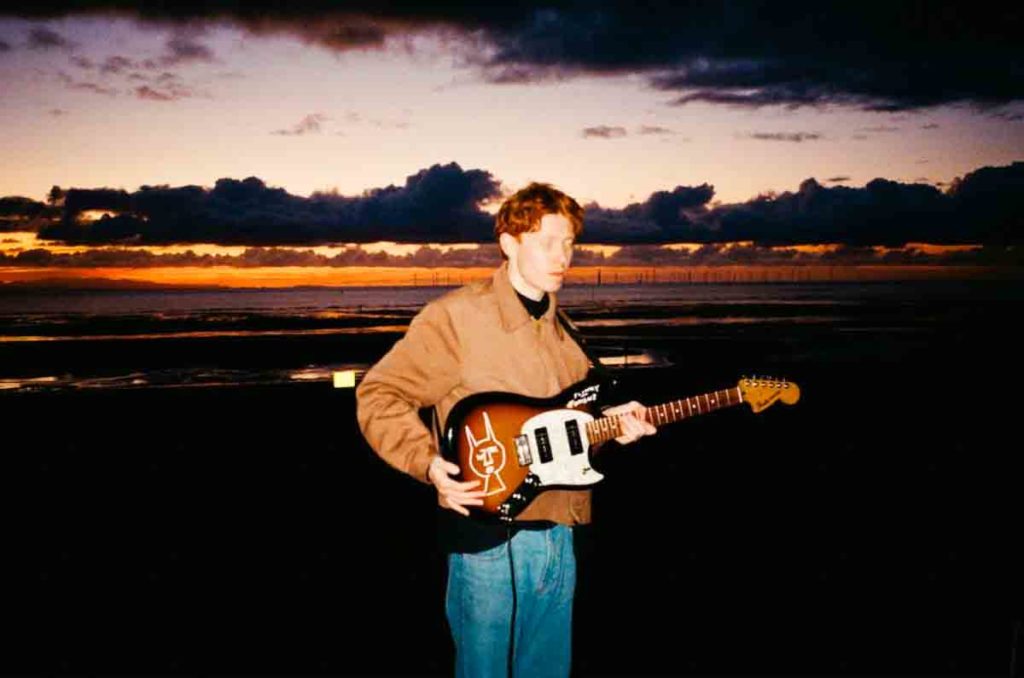 Despair, depression, and disillusion are themes that course through all of King Krule’s work. At the start of his Tiny Desk Concert from 2017, King Krule, a.k.a. Archy Marshall, gazes longingly toward the floor and croons softly into the microphone, his cadence labored, as though every word uttered is in itself an immense feat. At other points, he switches instruments, taps his feet, and even yells into the mic, his lyrics barely decipherable through his husky Cockney accent. Yet throughout, these themes of despair and isolation persist as does an unwavering commitment to instrumental and lyrical experimentation.

Marshall continues pushing the boundaries of rock music and weaving genres as wide-ranging as punk, hip-hop, soul, electronic, and jazz together seamlessly on his latest album Man Alive! The album arrives three months after King Krule released the enigmatic video “Hey World!,” which sees Marshall playing guitar alone in empty, haunting environments. The video is shot with a grainy, sparse quality that embodies the do-it-yourself ethos Marshall has stood by his whole career. Three songs of the four in “Hey World!” also turn up on Man Alive!—“Perfecto Miserable,” “Alone, Omen 3,” and “(Don’t Let the Dragon) Draag On.”

Sonically, the album is like much of Marshall’s work. Sluggish, melancholy guitar melodies drown in droning synths, moved forward by percussion that is jarring and forceful, like whiplash at the start of a roller coaster ride when you’re pulled forward and stop, forward and stop.

One of the most welcome musical decisions is Marshall’s inclusion of saxophone solos at the end of “Cellular” and the middle of “Comet Face.” Marshall has used the saxophone before, and brass flourishes appear throughout the album, but these two moments in particular are magical. It’s as if you’re sitting alone at the end of the bar, sipping whiskey while you listen to a jazz band play the soundtrack to the passive indifference that sets in after a lonely night.

The dark instrumentation is given a hallucinatory, nightmarish quality by Marshall’s haunting vocals. On the song “Stoned Again,” he calls marijuana his “sweet and sour” and “lemon honey” before lamenting, “Weed smoke made me feel so yucky / Pullin on my brain, born / Another fuckin’ junkie born.” His inevitable return to this lover appears at the end of the song, where he yells and cries out over industrial, discordant sounds of car tires screeching mixed with heavily distorted electric guitar. The whole song’s personification of weed brings to mind Black Sabbath’s seminal record Master of Reality and the stoner rock classic “Sweet Leaf.”

With the numerous influences and sounds Marshall draws from in his work, the comparisons need not stop at music. While Iggy Pop is certainly hard to beat when it comes to depicting adolescent aimlessness, Marshall’s work could certainly have also done a good job as the soundtrack to cult-classic film Trainspotting.

Furthermore, the alienation of “Perfecto Miserable” and “Slinky,” which features the opening line “See, I have not seen another person for days,” seem to fit perfectly with the dark moods of both Joker and one of its influences, Taxi Driver. Marshall’s music would provide the perfect gloomy atmosphere as the titular Joker roamed the corrupt streets of Gotham, utterly indifferent to everyone and everything.

Despite these dark themes, it would be reductive to say Marshall’s music is simply a self-pity party, as it features immense musical skill. And some of the lyrics on this project are brilliant. Absolutely phenomenal.

Take the haunting track “Airport Antenatal Airplane,” which has lyrics as cryptic as its title, including the lines, “A deluge of the world flows / Ain’t too easy to see when it’s / This lonely down here / So let’s escape in this arrow.” Immediately compelling yet utterly ambiguous, Marshall’s lyrics follow the songwriting tradition of Michael Stipe and Elvis Costello, who also crafted lyrics open to interpretation.

Marshall ends the album with the call “Please complete me.” Like most of his lyrics, it is uncertain what this means. Who is he talking to? My best guess is that he’s speaking to us, the audience. By listening to Marshall’s work, we affirm his vocation, we make it worthwhile. It demonstrates Marshall’s commitment to craft and continually pushing music forward. We don’t know what he’ll be doing next, but we’ll be listening.