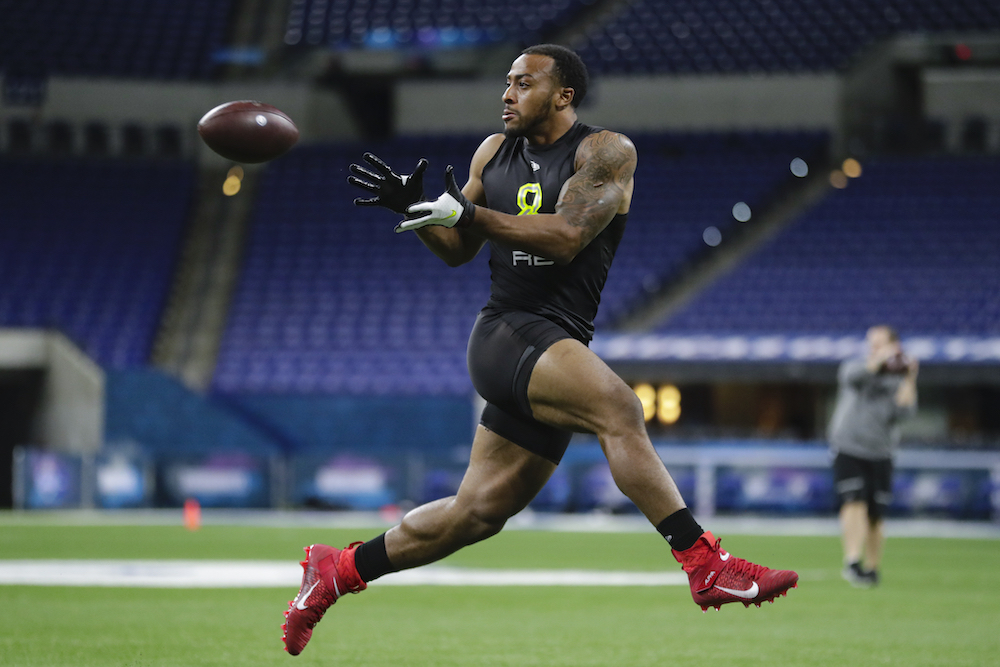 AJ Dillon was big in more ways than one on Friday night.

The former Boston College football running back, who weighed in as the heaviest back (247 pounds) in this year’s NFL Combine, wowed scouts with a 41-inch vertical and helped himself with a 4.53 40-yard dash.

Not only did Dillon’s vertical rank first among tailbacks, but it also marked the first time since 2000 that a running back over 235 pounds recorded a vertical of at least 40 inches, according to ProFootballReference. In 2018, Penn State’s Saquon Barkley—the No. 2 overall pick in the Draft—turned in a 41-inch vertical of his own, but he was 14 pounds lighter than Dillon.

Dillon knew he had the springs in him. After all, on March 4, 2018, the reigning ACC Rookie of the Year tweeted predictions for his combine stats, notably calling his 41-inch vertical two years before he even entered the draft.

Illinois State’s James Robinson was the only other halfback to reach 40 inches, while Western Michigan’s LeVante Bellamy and LSU’s Clyde Edwards-Helaire tied for third with 39.5-inch verticals.

With those two measurements, Dillon became just the fourth running back since 2006 to register a 41-inch vertical and a 131-inch broad jump—the other three being Daniel Lasco, Lache Seastrunk, and David Wilson.

Dillon’s 4.53 was the 10th-fastest 40-yard dash among participating running backs. He’s only the sixth back since 2000 to weigh 240 or more pounds and run a 4.53 or faster in the event. Wisconsin’s Jonathan Taylor stole the show, though: The two-time Doak Walker Award winner clocked out with a 4.39 in the 40. No other running back cracked the 4.4s.

Dillon did, however, come within two hundredths of a second of Leonard Fournette’s combine time. The Jacksonville Jaguars running back, who Dillon modeled his game around in high school, ran a 4.51 ahead of the 2017 Draft.

The on-field drills showcased Dillon’s explosion and pass-catching ability, both of which weren’t always on full display in the Eagles’ run-heavy offense the past three years. Factor in his 23 bench press reps on Wednesday—tied for the fourth most by any running back at the combine—and Dillon had himself a week in Lucas Oil Stadium.

Coming off a junior season in which he logged a career-best 1,685 rushing yards and 15 total scores, Dillon is No. 50 on ESPN analyst Todd McShay’s Big Board. But as of Tuesday, Mel Kiper Jr. didn’t even have the BC star inside his top-10 running backs list. As the Eagles’ all-time leading rusher, Dillon has the tire tracks to prove the effectiveness of his downhill running style.

Ever since his jaw-dropping stiff-arm and 275-yard, four-touchdown performance at Louisville in 2017, he’s had the college football world on notice.

On Friday night, he caught the NFL’s eye.

Lesley Visser: A League of Her Own
BC Fends Off Late UConn Rally, Earns First HEA Tournament Win