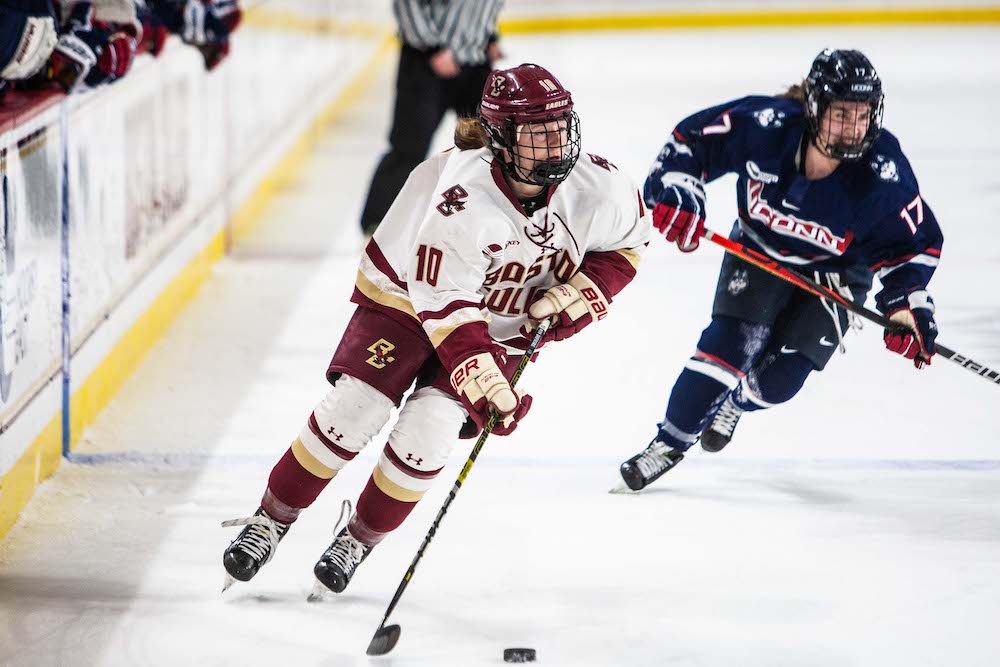 There is a landline telephone—yes, landline—in the press box of Conte Forum that rings every time a goal is scored. The sports information director of whichever team is on the ice—in this case, Katie Peverada of Boston College women’s hockey—answers the phone and dictates the numbers of the scorer and those who assisted to, presumably, the scorekeeper elsewhere in the stadium. And on Friday night, the box’s phone was ringing off the hook.

Though there was a significant scoring lull in the middle of the game, the phone rang six times in the Eagles’ 4-2 Hockey East quarterfinal win over visiting Connecticut for the first of two wins needed to secure a spot in the semifinals. With four different players lighting the lamp for the Eagles, BC once again proved that its balanced offense is its greatest strength.

Well, besides Maddy McArthur of course. McArthur was a force to be reckoned with between the pipes all night, burying acrobatic save after acrobatic save to hold UConn to two on 44 shots from the Huskies. The last time she posted 40 or more saves was against then-No. 2 Wisconsin on Nov. 30 of last year, when she recorded a career high of 43. On Friday, she nearly matched that total with 42. The phone could’ve rung even more than it did.

The Huskies’ only two tallies came within one minute of each other as the game drew to a close, giving BC, who previously held a three-point lead, quite the scare. UConn head coach Chris MacKenzie pulled goaltender Morgan Fisher with around five minutes left to play in a desperate attempt to get back in the game, and for a while, it looked like it would work. But Delaney Belinskas buried the puck from center ice on an empty-netter to secure a two-point win for the Eagles.

UConn outshot BC 44-27, cementing McArthur as the defensive star of the game. That is not to say, however, that she had no help from her teammates. Six Eagles combined for nine blocks, many of which came near the end of the game, protecting McArthur from facing even more shots than she did.

“We came together as a team,” McArthur said after the game. “I thought we had some key blocks, and the defense did a good job picking up sticks. It reminded me of that game [against] Wisconsin a lot actually.”

BC started out hot from the first puck drop, as Cayla Barnes passed the puck off to Hannah Bilka less than three minutes in, and Bilka fired a shot at Fisher. The puck hit the pad of the Huskies netminder and wobbled over the goal line for an early 1-0 lead.

Barnes was hungry for more, and she followed up her assist with a top-shelf power from the left circle with under a minute left in the first frame. BC led 2-0 heading into the first break, and it looked as though it wasn’t going to stop there.

UConn, however, had other plans. The Huskies outshot BC 20-6 in the second period and had two chances at the power play, but BC’s defense was rock solid.

The Eagles’ penalty kill unit was in peak form on Friday, though only two Eagles saw time in the box all night. The first man advantage for UConn didn’t come until nearly halfway into the second period when Delaney Belinskas was sent away for tripping. The second, and last, penalty of the game, also on the Eagles, came as Cayla Barnes was called for interference, and the Eagles’ penalty kill unit made quick work of those two minutes as well. UConn spent the entire game at full strength, preventing a single five-on-four opportunity for BC.

Even with the Eagles so outmatched on shooting, Jillian Fey added to the Eagles’ lead just a minute into the second frame. She chipped the puck over a sliding UConn defender in her way, and the puck trickled through Fisher’s legs.

The only break in BC’s defense came on the Huskies’ two six-on-five goals. The Huskies scored twice in one minute to cut the lead to just one with a minute and a half to go. First, Tristyn Svetek fired a wrister from the circle, and Jessie Aney redirected it with the tip of her stick past McArthur’s shoulder.

Then a pop-up shot went over the head of McArthur and spun just across the goal line, credited to Natalie Snodgrass, UConn’s most prolific attacker. The officials reviewed it for a possible hand pass, but the play stood, and BC was ahead by just one.

“There were times when we tried too much to help each other out and stopped playing our own position and allowed them to get those two goals,” said Eagles head coach Katie Crowley of the defensive breakdown.

Just as soon as UConn’s prospects rose, Belinskas’ empty netter dashed them, and the Eagles avoided a comeback upset in the first round.

“It’s just that sense of urgency, that we’re fighting for our lives, and so are they,” said Barnes. “We want to play next weekend, so I think we really have that chip on our shoulder, and we’re just pushing to make it to next week.”