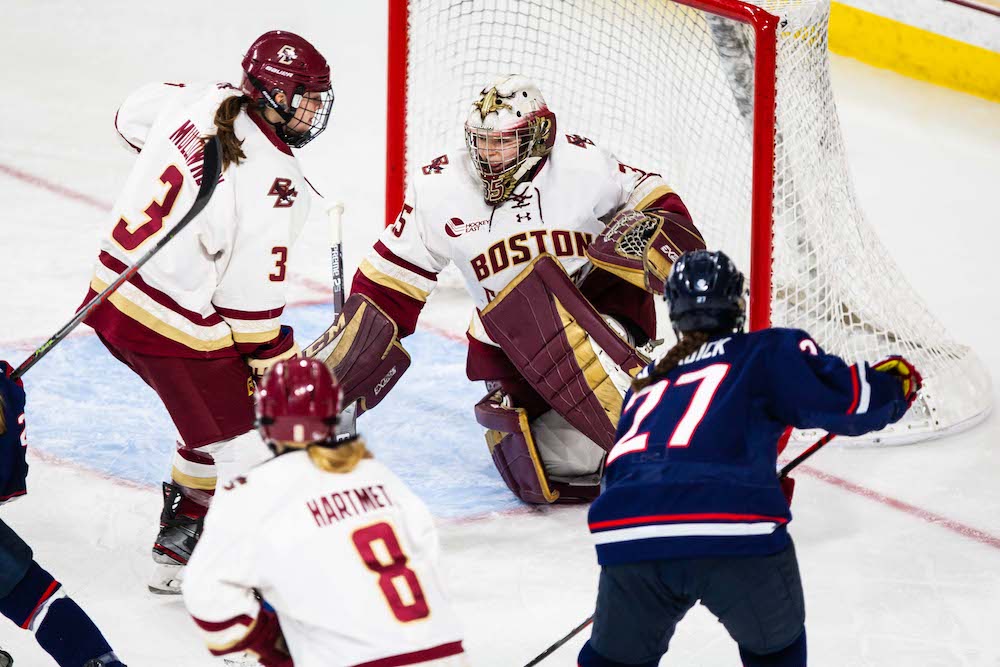 With its win over UConn in the first game of the Hockey East Quarterfinals, Boston College women’s hockey was sitting pretty. But on Saturday afternoon, from puck drop to the end of the third period, the Eagles (17-15-3, 14-11-2 Hockey East) were playing like the more comfortable team, and that hurt them—ultimately leading to an 0-2 defeat at the hands of the Huskies.

For BC, there was no losing scenario for the outcome of this game. Had they won this contest, the Eagles would have moved on to the next round, but if they lost, there were no repercussions—they wouldn’t be knocked out of the playoffs, just forced to play an additional game.

But the Huskies (17-17-2, 13-12-2) had a different mindset. UConn was playing for its playoff life, its ability to get a chance for a comeback and put its first loss in the past. The Huskies had something to prove in this game, and they played as such. In scoring its two unanswered goals against the Eagles—one in the first period and one in the second—UConn proved that it has the ability to compete and it won’t give up at the mere sight of a challenge.

“Knowing that your season can end, how are you going to play?” said head coach Katie Crowley following the Eagles’ loss. “Today [UConn] played like [its] season could end.”

The Huskies asserted themselves early on in the first period, forcing Maddy McArthur to stop the puck against some high-intensity chances. But UConn kept coming, unwilling to back down. After facing an onslaught of shots against, McArthur allowed the first goal of the game. Huskies defenseman Claire Peterson made the initial shot from the blue line, which was tipped past McArthur by Taylor Wabick.

The Eagles, who had been effectively shut down by the Huskies throughout the first, managed to get their first shot against UConn goalie Morgan Fisher with just five and a half minutes remaining in the first period. Fisher, however, expertly caught Caroline DiFiore’s shot, preventing BC from tying the score.

The second period continued much the same as the one that came before, with UConn dominating the play as its defense simultaneously shut down any chance the Eagles had at staging a comeback. Midway through the second frame, the Huskies added an insurance goal.

After two unsuccessful periods, BC needed to make a change in order to remain in the game. The Eagles had only gotten five shots on net in both the first and second periods, with the first shot in each coming midway through the frame or afterward. And yet, despite more than doubling their shot totals from the periods prior, the Eagles could not find the back of the net. McArthur continued to make excellent saves against UConn, preventing the Huskies from running up the score. And as the clock wound down in the third period, the Huskies’ 2-0 lead over the Eagles stood, tying up the series at one game apiece.

This game marked the first time the Eagles had been shutout since BC lost 0-3 to New Hampshire in early February. McArthur had also been in net for that game, stopping only 22 of the 25 shots she faced. The difference, however, between that game and the loss the Eagles suffered against UConn was how BC had actually outshot the Wildcats 32-25. The shot count was simply another area in which the Huskies dominated the Eagles, keeping BC to only five shots on goal in both the first and second period and a total of 21 shots, while averaging 12 shots on goal per period themselves.

As a result of UConn’s all-around dominant performance over the Eagles, the two teams will meet once more for the last matchup of their best-of-three series on Sunday afternoon. And when they meet, it won’t just be one team playing as if its season could end.

Eagles Slam BU to Get Back on Track
Eagles Get Revenge in Battle of Comm. Ave.