Home » Eagles Slam BU to Get Back on Track 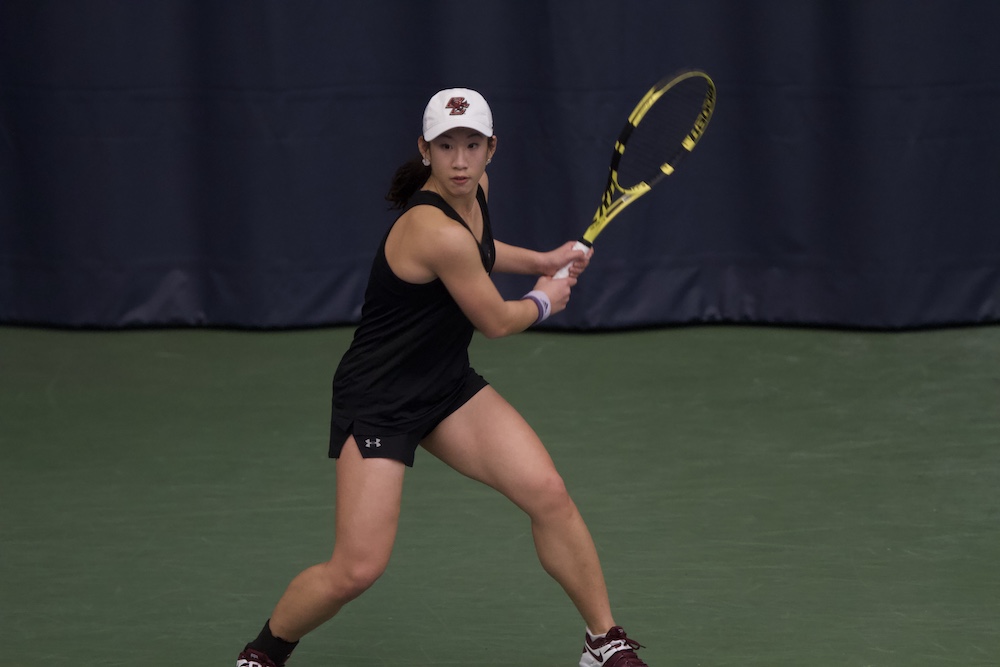 Eagles Slam BU to Get Back on Track

Coming off consecutive losses against top-10 ranked schools Duke and Georgia Tech, Boston College women’s tennis needed to make a statement against crosstown rival Boston University. With a final score of 6-1, the Eagles trounced the Terriers and got back on track, improving to a 9-4 record. After devastating overtime losses in men’s and women’s hockey to BU in the Beanpot earlier this month, women’s tennis helped level the score with the rivals in an efficient, dominant display against BU (5-3).

The Eagles (9-4, 0-4 Atlantic Coast) quickly flew out of reach with a fast start from the first doubles team. BC’s Yufei Long and Kylie Wilcox seemed to be coasting after a strong five games put them up 4-1. At one point in the fifth set, Long lasered two cross-court backhands over the net, moving the BU player almost off the court, before driving a forehand deep down the left sideline.

Despite this fast start, BC ran into trouble as BU’s Shelly Yaloz and Emily Kim brought a competitive fire to the rivalry game, surging back to make the score 5-4. Yaloz shouted after many of the points, rallying her and her teammate as they mounted a comeback. For a while, the tide seemed to be turning, but Long and Wilcox remained composed despite the setbacks. Ultimately, the valiant effort was to no avail, as the consistent serving from Wilcox and stellar footwork and groundstrokes from Long pulled out the win for the Eagles.

With a win from the second doubles team, BC secured the doubles point and was riding a wave of momentum into its singles matchups. Long, BC’s No. 1 singles player fresh off a win in doubles, defeated BU’s Erica di Battista in a second set tiebreak, winning the match 6-2, 6-3. Long’s agility and stamina are part and parcel of her success and No. 90 national ranking, as she remains fundamentally sound and focused well into her matches.

On the adjacent court, Natasha Irani performed well defensively against BU’s Lily Burchell. Irani’s ability to stay in long points and lengthen rallies was vital to wearing down Burchell, earning a comfortable 6-2, 6-3 win.

In the next wave of singles matches, Kylie Wilcox and Elene Tsokilauri delivered strong performances, winning 6-4, 6-3 and 6-1, 6-3, respectively. The only consolation for BU came in the fifth singles match, in which Hailey Wilcox fell 1-6, 6-3, 1-0(9) to Alex Angyalosy.

Going into the match, the Eagles were only .500 at home with a 3-3 record. In addition to improving to a 9-4 overall record, their success at home points to a brighter future on the courts at the Margot Connell Recreation Center. Hopefully, they can use this win to build momentum and win their first conference game of the year. Although the Eagles’ non-conference record is a perfect 9-0, their ACC record is a disappointing 0-4.

As tennis is as much a mental game as a physical one, this dominant display of technical skill and composure against BU will certainly spark morale going forward into a tough test against No. 15 Notre Dame on Saturday. It offers a chance for the Eagles to not only win their first in-conference game of the season, but to add to the history books another win against a fierce BC rival.

Featured Image by Charlie Fackler / For The Heights