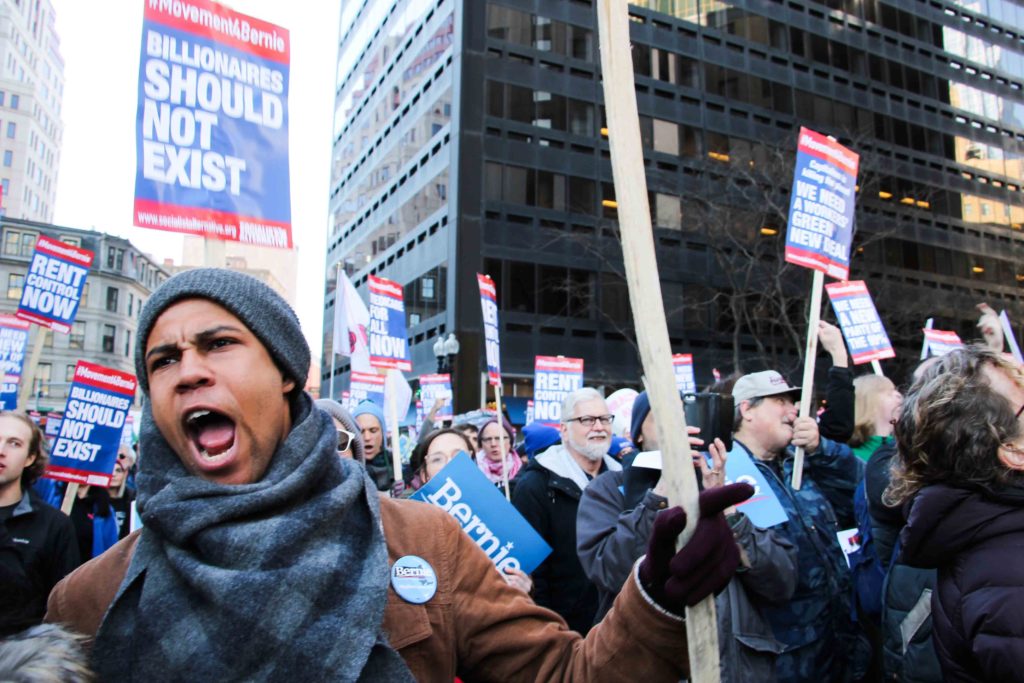 Vermont Senator Bernie Sanders is no stranger to shaking hands—now in the swing of his second major presidential campaign, Sanders has amassed millions of supporters throughout the nation. Sanders encountered a different type of campaign trail handshaking, however, while braving the New England cold—without gloves—for a rally on Boston Common on Saturday. Despite the drop in temperatures, a line of thousands snaked around the perimeter of the park to see the popular progressive candidate speak.

The Boston Herald estimates the total attendance for the rally was around 13,000. Sanders spoke for roughly half an hour, hitting on all of his major policy proposals, including Medicare for All, the senator’s signature plan to establish a single-payer health care system in the United States.

“We are the only major country on earth not to guarantee health care to all of our people,” Sanders said. “Our neighbors in the north in Canada … in France, in Germany, in the UK, in Finland and Denmark and Sweden and Norway—countries all over the world—can somehow figure out a way to provide health care as a human right. Don’t tell me the United States of America can’t do this anymore.”

Sanders’ resolute Brooklyn accent floated through the speakers on the makeshift stage as he laid out a laundry list of actions he would take as president. Intermittent cheers erupted as he stated his plans to legalize marijuana via executive order and pursue a climate policy based on the principles of the Green New Deal. Additionally, Sanders promised to nominate Supreme Court justices who would overturn Citizens United, the 2010 case that peeled back campaign finance regulations, and protect Roe v. Wade, the 1973 case that secured the right to have an abortion.

The Boston crowd cheered loudly when Sanders made appeals regarding health care and academia—two major industries in Boston—affirming his intention to “believe in science” after criticizing President Donald Trump for his response to the spread of the coronavirus in the United States. Digs at Trump were prominent throughout the speech, but Sanders received particularly strong verbal affirmation from the crowd when he took a shot at Mike Bloomberg, the billionaire businessman and former New York City mayor who is running against Sanders for the Democratic nomination.

So far, Bloomberg has spent an estimated $410 million on TV ads alone for his campaign, according to The New York Times. Bloomberg, who announced his campaign in November, will make his first appearance on primary ballots when 14 states vote on Super Tuesday. Sanders currently leads the race with 60 total delegates, according to NBC.

Sanders did not mention Massachusetts Senator Elizabeth Warren at the rally in her home state. A poll released Saturday by The Boston Globe, Suffolk University, and WBZ-TV found that Sanders and Warren are statistically tied to win the Massachusetts primary on Tuesday. Billionaire Tom Steyer, former South Bend, Ind., Mayor Pete Buttigieg, and Minnesota Senator Amy Klobuchar suspended their respective campaigns after South Carolina’s primary on Saturday, leaving five candidates in the Democratic primary. The Boston Globe poll estimated Buttigieg would have garnered 12 percent of the vote in the Massachusetts primary on Tuesday.

With 155 of the total 3,979 pledged delegates accounted for thus far, Sanders is the frontrunner in the Democratic primary. Leadership in the Democratic National Committee (DNC) has expressed concern about the possibility of Sanders winning the party’s nomination. In January, Politico reported that approximately six members of the DNC executive committee were floating a proposal to allow superdelegates to vote on the first ballot at the party’s national convention. The policy would give DNC leadership more influence over the outcome of the primary, which is currently structured so that superdelegates vote on the second ballot in the event of a contested convention.

Sanders, however, is hardly pandering for support from the Democratic establishment—or any establishment. Sanders articulated his vision for upending the political and business institutions that loom large in American society. 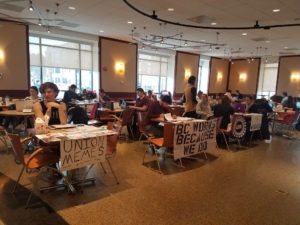