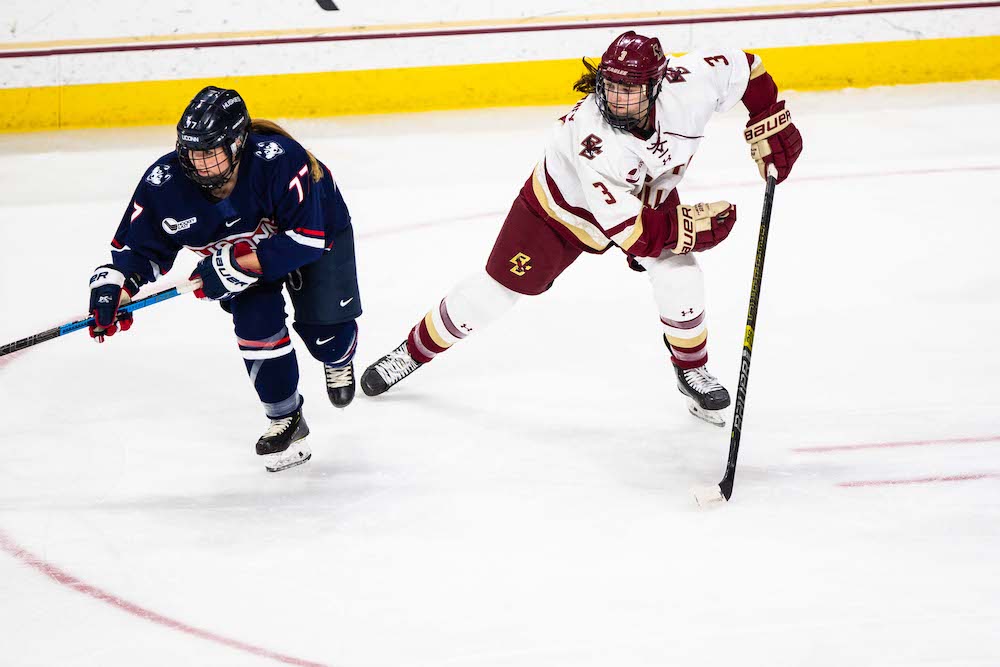 For Boston College women’s hockey in the 2020 Hockey East tournament, the wheels seem to fall off in crunch time. After nearly sacrificing a three-point lead in the final minutes of the Eagles’ first quarterfinal game, BC gave up two goals in the final minutes of the win-or-go-home matchup against UConn. And this time, without a cushiony lead to fall back on, BC’s season stops here.

The Eagles (17-16-3, 14-11-2 Hockey East) scored midway through the game to secure a 1-0 lead after 30 minutes of play but couldn’t solve UConn goaltender Morgan Fisher the rest of the night. In fact, the Eagles struggled to even get in range of their opposition’s cage, firing just 16 shots on Fisher all game long.

With their 2-1 defeat of the Eagles, the Huskies (18-17-2, 13-12-2) will advance to the semifinals of the conference tournament after winning the final two games of the series, and BC will head home after just one round.

Though the first period was scoreless, it did not lack excitement. BC netminder Maddy McArthur faced 13 shots and denied all of them, including a few particularly acrobatic saves. As UConn left the box for its first power play of the game, the Huskies had a breakaway and a clear shot at goal, but McArthur dove just in time to deny Savannah Bouzide of a tricky backhander at the left post.

Then, as the clock wound down on the first frame, McArthur stretched out to make a kick save with her left pad on Natalie Snodgrass’ point-blank one-timer at the top of the crease, and the score stayed locked at 0-0.

UConn nearly went the entire three-game series without a single player in the box, but BC found itself a man down nine times, which shows the effectiveness of BC’s penalty-kill unit through the weekend. UConn’s second and final penalty of the series came as Bouzide went to the box early in the first, but the Huskies were quick to kill it off.

After the first intermission, BC headed out looking to break its scoreless spell, which dated all the way back to the final minutes of the first game of the series. UConn was just as hungry, though, and another one-timer in the slot looked like a sure shot for the Huskies to take the lead. Captain Lindsay Agnew, however, had other plans, and she dove in front of the shot for a big-time block to keep the score level.

Just a few minutes later, Agnew took over on offense to earn the first point of the game. Hannah Bilka fired one from the left circle, which rebounded off Fisher, and Agnew was there to deflect it to the far post.

The last 10 minutes of the period passed without much ceremony, though the Eagles’ penalty-kill unit continued to thrive under the pressure of being a man down after Kelly Browne went to the box for elbowing.

The wheels began to fall off BC’s defensive machine in the final period, despite the Eagles holding a one-point lead. Three penalties in the final frame alone meant even more pressure on an already-tired penalty-kill unit, and the Eagles’ defense began to crack under the pressure.

With five minutes left to play, McArthur made another point-blank save, which rebounded to the left circle, but this time UConn’s Viki Harkness was there to grab the rebound and fired one past McArthur’s near side. With that, the score was level once again, and it was suddenly anyone’s game.

UConn was sure to build on the momentum that a late-period goal created, and Snodgrass was the first to do it. With two minutes left on the clock, she broke away up the left side and fired a wrister from the faceoff dot that beat McArthur to seal the Huskies’ spot in the semifinals.

Eagles Get Revenge in Battle of Comm. Ave.
Eagles Top Syracuse to Close Out Regular Season