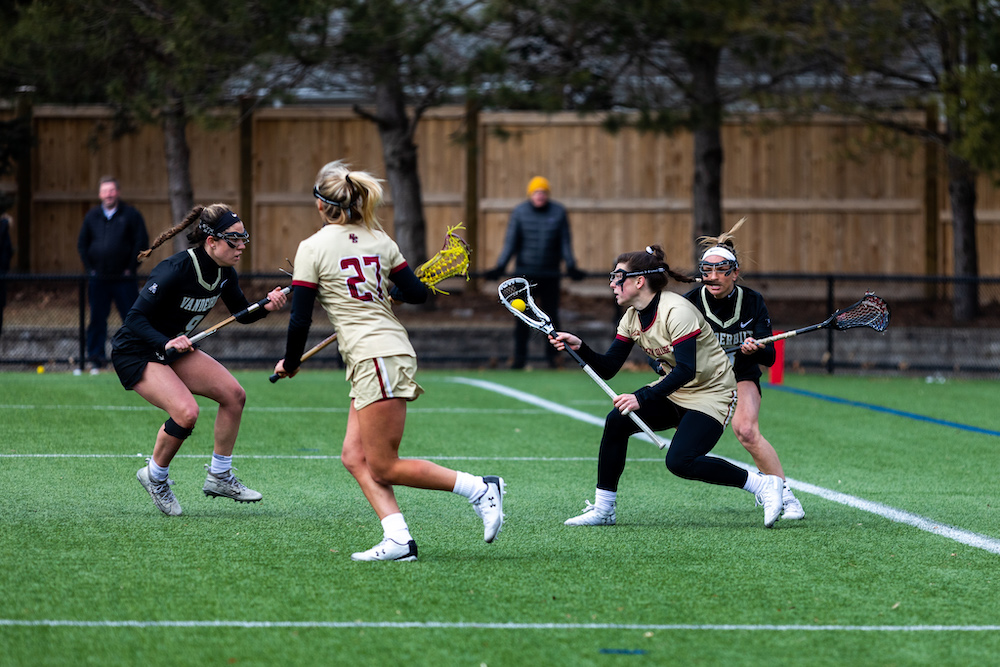 After a break from competition since Feb. 25, Boston College lacrosse came back from Spring Break to play its toughest opponent so far this season. The No. 18 Eagles opened conference play against No. 2 Notre Dame. After being locked down by the Irish defense, paired with Notre Dame securing five unanswered goals in the second half, the Eagles fell to their rival 11-7.

The Eagles (3-3, 0-1 Atlantic Coast) found themselves playing catch up from the beginning. The Irish (6-0, 2-0) netted the first goal by Andie Aldave just 47 seconds into the game. But after Caitlynn Mossman picked up a rejected free position attempt, the score was all tied up. A yellow card given to Kelly Donnelly resulted in a free position attempt for BC, and all it took was Charlotte North for the Eagles to get their first lead of the game.

The lead was short lived, however, as Kasey Choma was able to tie up the score in no time. While both teams netted two goals within the first 10 minutes, the Eagles limited the Irish possession by capitalizing on an uneven Notre Dame defense.

Aldave drew a free position shot in the Eagles’ zone, and she was able to successfully convert to regain Notre Dame’s lead, but the resulting media timeout gave BC some time to regroup. But after opening up the half shakey, Notre Dame’s defense came back in the latter 15 minutes stronger than ever.

Notre Dame’s defensive strength didn’t faze Cara Urbank, though. Muscling her way through the Irish’s zone, she closed in on Irish goaltender Bridget Deehan to again tie up the game. Following Urbank’s goal, the Irish called their first timeout in a game led by strong defensive efforts on both sides.

Despite the time to catch their breath, neither team seemed to be able to pull away, resulting in a drought of over 10 minutes without a goal. Both teams were creating chances for themselves, but both Deehan and Rachel Hall were ready for every shot that came their way.

With one minute left to go in the half, the drought was over. Aldave wove her way around BC’s defense and secured both a hat trick for herself and an edge for the Irish to open the second half.

Notre Dame targeted the top corners throughout the game, making it hard for Hall to get in front of its shots. Samantha Lynch used the same strategy in an attempt from the middle, and it paid off. With a pattern that matched the opening of the first half, the Eagles found themselves opening the second with their biggest deficit of the game.

The Eagles attempted to respond, but Deehan was there to deny their attempts. For 22 seconds, BC was given a two-man advantage, but the Irish’s defense was steadfast in its ability to block BC.

A yellow card on Ryan Smith put the Eagles on their first play disadvantage in the game. They cleared it, however, and kept Notre Dame at a two-goal lead.

For Urbank, the deficit had run its course. In BC’s first goal in over 20 minutes, she ripped a shot past Deehan to cut Notre Dame’s lead in half. But a successful attempt by Madison Ahern gave the Irish their two-point lead back.

A second timeout called by Notre Dame with 12 minutes left gave the Eagles some much-needed time to regroup after posting just one goal in the entire half. But after Hall was pulled from the cage to try to aid the Eagles’ offense, Jessi Masinko secured a goal on an empty net, sinking the Eagles into a three-goal deficit.

Just minutes later, Masinko netted a second straight goal, capitalizing on a crumbling BC defense. With eight minutes left, the Eagles were given the tough task to double their score for a chance. But after spending the majority of their time in their own zone, BC’s defense couldn’t match the offensive effort from Notre Dame. Hannah Dorney picked up a pass from Katie Enrietto, and before BC could react, her shot had gone past Hall and into the net.

BC pulled Hall for an extra player once again, but Makenna Pearsall took advantage of the empty cage to net the Irish’s 10th of the game. Courtney Weeks secured two goals for the Eagles with just over two minutes left in the game, but they weren’t enough to come close to the Irish, as the Eagles fell to their conference rivals.