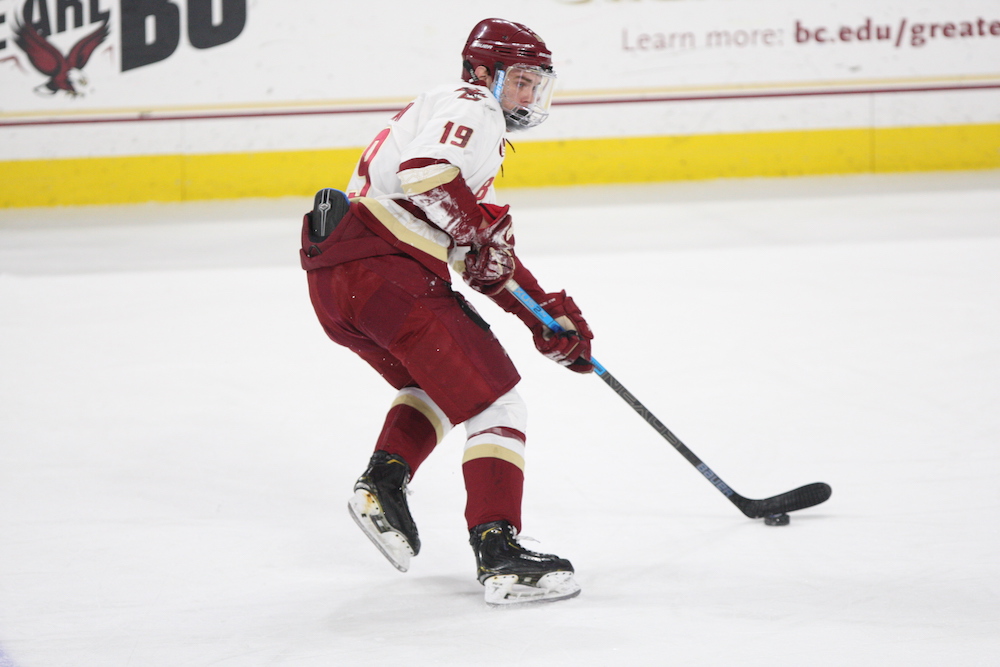 For the first time in a long time, Conte Forum wasn’t deafening on a Friday night. This occurrence was not for a lack of games, rather it was for a lack of students. BC’s Spring Break came toward the end of No. 4 Boston College men’s hockey’s season, leaving the Eagles without the majority of their fans for their last home game of the regular season. And yet, while BC’s student body was off for the week, the Eagles looked just as refreshed and ready to play as any other game.

It could, perhaps, be due to the fact that the Eagles’ game against Hockey East opponent New Hampshire (15-15-3, 9-12-2 Hockey East) fell on BC’s Senior Night, invigorating the Eagles to secure a win in honor of those graduating members. And BC (24-8-1, 17-6-0) was certainly successful in that goal, taking down UNH 2-1. Even though the game was dedicated to the 10 graduating seniors, it was the rookie class that put on the show.

Less than a minute into the game, the Eagles showed why they are first in Hockey East. Freshman Alex Newhook picked up the puck in the Eagles’ end and carried it through neutral ice to the Wildcats’ zone to give BC an early offensive advantage. As Newhook skated past the net, he sent a centering pass behind him onto the stick of Mike Hardman, who easily lifted the puck under the glove of UNH goaltender Mike Robinson.

While Newhook has become known as an offensive juggernaut—the freshman is 10th in the nation and second in Hockey East in goals per game—he has also played a crucial playmaking role in his second-line center position. The Newfoundland native has 21 assists so far this season, tying UConn’s Benjamin Freeman for 35th in the NCAA in assists per game with 66 percent. Senior captain David Cotton, who sat out this game due to illness, leads the Eagles with 24 assists on the season and is tied for 16th in the nation with 75 percent.

Shortly after Hardman’s tally, freshman Marshall Warren added his own name to the scoresheet. After a battle along the boards sent the puck flying across the Wildcats’ zone, Warren skated from the blue line to collect the puck and send the puck rocketing through Robinson’s five-hole, extending the Eagles’ lead to 2-0.

With the addition of this goal, Warren became the second freshman defenseman in Hockey East to score six goals this season, second only to No. 9 Massachusetts’ Matthew Kessel, who has seven goals on the season.

After a quiet second period passed by, the Wildcats came back fired up for the third period. After a brief period of back-and-forth play, UNH gained control of the puck and managed to cut the Eagles’ lead in half. Defenseman Anthony Wyse fought his way to the front of the net before sending the puck across the crease to left-winger Angus Crookshank, who sent the puck past a sprawling Spencer Knight.

Warren and Hardman weren’t the only rookies to make an impact on the game, as Knight prevented the Wildcats from evening the score late in the third. The Eagles had led the Wildcats in shots on goal in each of the periods prior, but UNH picked up the pace in the third, outchancing BC as it attempted to come back from its early deficit. And yet, aside from the third-period goal scored by the Wildcats, Knight shut the door, stopping 23 of 24 shots against.

“The last 20 minutes [it came down to] the last second to see if we could get the two points,” said head coach Jerry York. “Three quarters of the game they held us at two goals, [and] we’ll expect the same thing tomorrow night.”

While the Eagles have already secured the No. 1 spot in Hockey East, who they will face in the first round of the tournament is still up in the air. There are only two more Hockey East games scheduled for the regular season—including the second half of BC and UNH’s home-and-home series—but the Eagles could still face Providence, UNH, or Northeastern in the quarterfinals. As UNH still hangs in the balance of playoff eligibility, the Eagles will have to expect a fight in their final regular-season game.

“New Hampshire still has a chance to get in the playoffs,” said York. “We’ll get another inspired Wildcat team tomorrow night.”

And with a record of 24-8-1 on the season, the Eagles are guaranteed to have their best campaign since their 2015-16 season, where they had gone 28-8-5 in the regular season en route to a trip to the Frozen Four. BC’s season stuttered to a stop in the Frozen Four with a devastating 2-3 loss to Quinnipiac, and since then, the Eagles have struggled to replicate their winning formula. But with the Hockey East tournament on the horizon, along with the NCAA tournament not long after, BC looks to move on from its past and work to secure a deep postseason run.