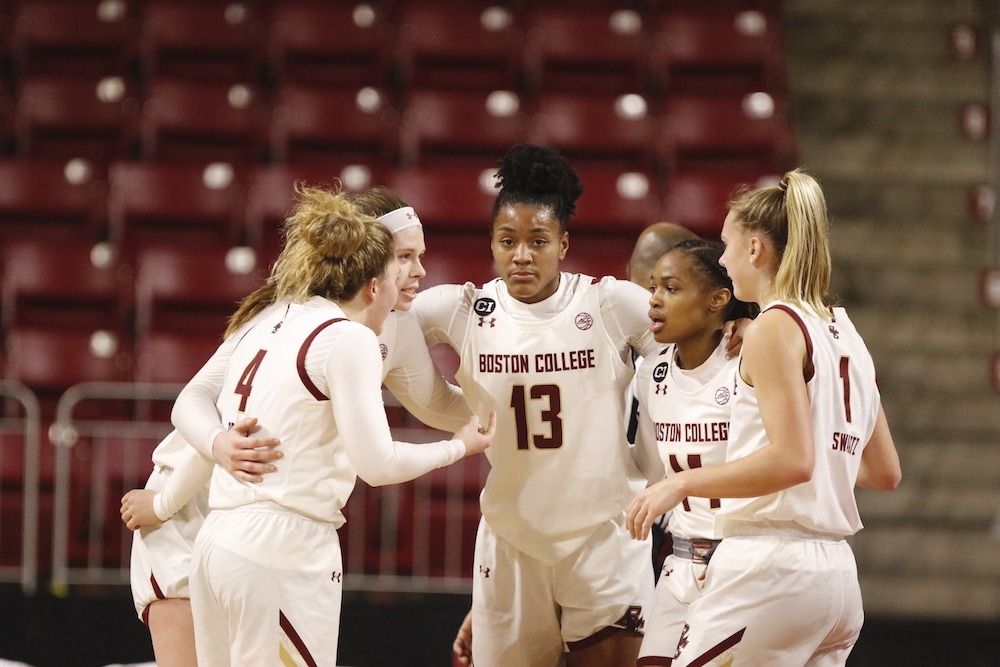 The last time Boston College women’s basketball found itself in the semifinals of the ACC tournament was nine years ago. So it makes sense that head coach Joanna Bernebei-McNamee would go up to every individual Eagle after the game to give them each a celebratory hug.

With just over four minutes to go in the game, the Eagles found themselves down by seven points and looking at another disappointing postseason finish. But the Eagles are no strangers to comeback victories, having most recently come back to beat Pitt and Notre Dame.

Taylor Soule—who has had a breakout sophomore season and recently won ACC Most Improved Player honors—hit a jumper to open up what would become a 14-0 run over the final minutes of the game to seal her team a spot in the next round. She then tied it up for BC at 77 apiece with a 3-pointer off a Duke turnover.

From there, it was up to Emma Guy to work her last-minute magic. Guy gave the Eagles their lead back on a layup after grabbing Makayla Dickens’ rebound with just over a minute to go. A few costly misses by the Blue Devils helped BC on its way, and five foul shots by Soule finished it off.

Though this is just the second time BC will advance to the conference semifinals, the win isn’t the only milestone for the Eagles. Down 11-15 near the end of the first quarter, Georgia Pineau hit a jumper in the paint to earn her 1,000th career point. She became just the 28th Eagle to ever hit that milestone, and she didn’t slow down from there. Pineau finished the night with six points and three assists in just 20 minutes of play off the bench.

Soule led the Eagles with 26 points, making it her eighth-straight game—and 23rd this season—with points in the double digits. Guy had her fourth double-double of the season with 14 points and 10 rebounds, plus she tallied two assists and a team-leading three steals.

Duke’s starters had a standout game as well with three players tallying double digits. Haley Gorecki led the Blue Devils with 25, while Leonna Odom and Jade Williams followed with 22 and 12, respectively.

The difference for the Eagles though, was the performance of bench players. Mikayla Boykin was the only player from Duke to record points off the bench while both Pineau and Cameron Swartz recorded six apiece for the Eagles.

The final run wasn’t the only comeback for the Eagles, though. Down 18-17 after the first quarter, BC needed to stay within reach. It took until midway through the second period for the Eagles to tie it up, but they did so in beautiful fashion. A swing pass from Pineau at the top of the arc found Taylor Ortlepp at the baseline for a 3-pointer to knot the game at 29.

BC retook the lead a few minutes later on a Swartz 3-pointer, but a one-point lead was still enough to keep Duke in it. After some more back-and-forth play throughout the quarter, the Eagles went to the locker room down by three at halftime.

Another 3-pointer from Ortlepp gave BC the lead once again just minutes into the third frame, and the Eagles held tight to the advantage. BC led for the entire third period and had a full head of steam going into the final 10 minutes.

Duke had other plans, though, and was not willing to go down without a fight. The Blue Devils clawed their way back once more in the final period and earned their largest lead of the game at seven with around five minutes to play.

BC’s 14 unanswered points in the final five minutes of the game were the go-ahead for a thrilling upset of Duke, who the Eagles lost to in the teams’ only other meeting this year. The difference was, in the earlier game, BC could never quite catch up, and in Friday’s game, the Eagles always found their way back in front.