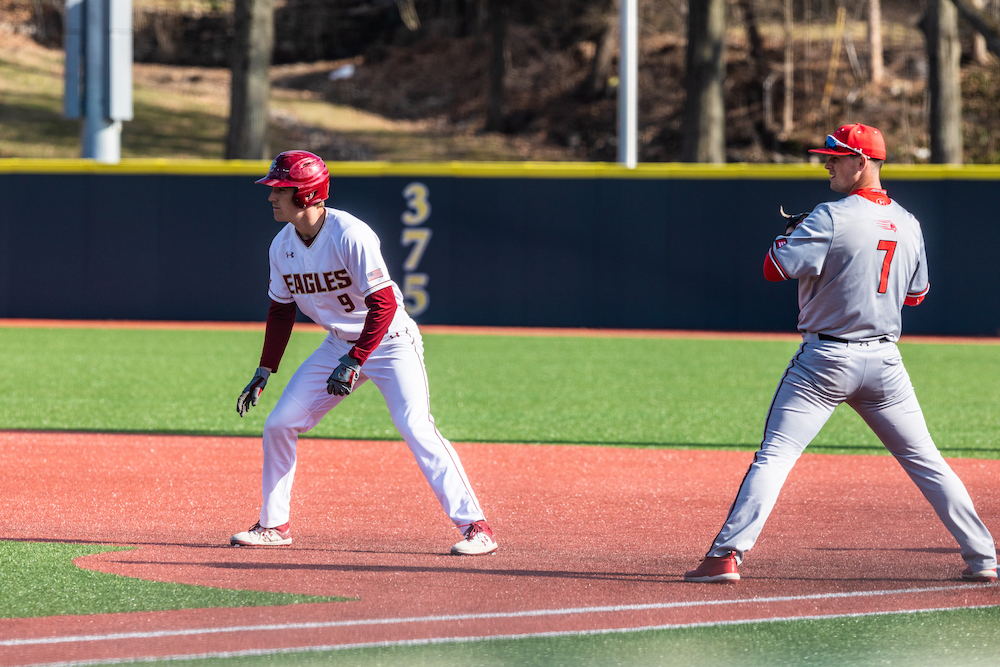 Eagles Down Crusaders Despite Late-Game Comeback

This is what second baseman Luke Gold faced as he stepped up to the plate in the bottom of the sixth inning. After Holy Cross tied up the game at five runs apiece, Boston College baseball needed to work to regain its lead. Jack Cunningham had just been walked by Holy Cross relief pitcher Jake McOskar, allowing Dante Baldelli to clear home and put the Eagles up by one. Gold had the opportunity to further extend the Eagles’ lead over the Crusaders, and he rose to the occasion.

Gold stared down Talbot, and when the pitch came, Gold drove the ball into deep left field, advancing to second base. Both Cody Morissette and Brian Dempsey scored, putting the Eagles up 8-5 over Holy Cross. While the Crusaders would stage a late-game comeback, BC weathered the storm, pulling out a 10-7 win.

After playing its first 14 games of the 2020 season on the road, BC (6-9, 0-3 Atlantic Coast) was finally set to play its home opener against Holy Cross (5-10, 0-0 Patriot League). The Eagles struggled to start the season, winning only five of those road games and getting swept by both ranked opponents they faced—then-No. 8 Arizona State and then-No. 23 Clemson this past weekend.

Freshman Evan Moore started on the mound for the Eagles, and just when it looked as though the Eagles would get three quick outs then move onto the bottom of the first, Holy Cross shortstop Cam Meyer made things complicated. Moore threw a third strike against Meyer, but catcher Parker Landwehr couldn’t control the wild pitch, giving Meyer enough time to reach first.

From there, Andrew Selima was hit by Moore’s pitch, allowing Meyer to advance to second, and Andrew McKenna singled to center field, sending it deep enough for Meyer to make the final stretch home, putting Holy Cross up by one. The Eagles finished the job at second base before the Crusaders could score again.

In two of its three losses to Clemson, BC relinquished at least one run in the first inning. It seemed as though the Eagles would follow that same path as both Sal Frelick and Dempsey hit fliers straight to the outfielders’ gloves.

Next up to bat for the Eagles was Cody Morissette. With a single strike on the count, Morissette singled to left field, keeping BC in the game. Morissette stole second off a wild pitch before making it home off a left-side single by Jack Cunningham. Ramon Jimenez grounded out to third soon after, keeping the game tied at one.

With his first-inning hit, Morissette became the fastest Eagle to notch 100 career hits, beating Tony Sanchez, who had set the record in 2008. Morissette leads the Eagles in hits this season with 26 and sits at No. 15 in the NCAA for a batting average of .455.

BC nearly went three-up, three-down before Austin Masel and Ben Dellacono singled with two outs. But Meyer then hit a pop fly to second, keeping the game tied.

With a chance to take the lead, the Eagles picked up the pace and dug deep in the bottom of the second. Landwehr began the inning strong, hitting a grounder to center field. He made the turn to second but played it safe, securing his spot on first. Baldelli walked on a full count by pitcher Connor Crotty, and Frelick made a hit out to right field, but Dellacono made a diving grab. Dempsey then got on base, forcing the Crusaders to replace Crotty with relief pitcher Matt Clarkin.

Morissette grounded out, but his efforts sent Landwehr home and put the Eagles up by one. Suozzi then hit a triple off Clarkin, sending Baldelli and Dempsey home. Cunningham closed out the inning’s scoring with an RBI for Suozzi, ending the inning 5-1.

After BC’s explosive performance in the second, the third inning went quiet for both teams. But when the Crusaders went up to bat in the top of the fourth, they came ready to fight. Holy Cross quickly got one player on base against relief pitcher Brian McMonagle, who had taken over for Moore midway through the third inning. With a double by Selima, Masel made it home from first, earning a run back. Selima quickly followed Masel to cut the Eagles’ lead to two.

The bottom of the fourth and the fifth inning went by quietly on both ends. The Eagles replaced McMonagle with lefty Daniel Baruch in the sixth as BC continued to highlight its depth of freshman pitchers. Wolf hit a single to right center field with the bases loaded, sending both Selima and Dellacono home, tying the game.

But as Cunningham and Gold collected RBIs in the sixth, the Eagles were back in the lead. But quickly after the two helped to put the Eagles up by three runs, McOskar struck out Jimenez, sending BC back to the field for the top of the seventh.

With three innings remaining, the Eagles needed to shift gears and work to defend their lead. And as the Crusaders were shut down in both the seventh and eighth innings with BC collecting one more run in each, it looked as though a BC win was inevitable. The Crusaders collected two more runs in the ninth, but at that point, it was all over. With their three-run lead over Holy Cross, the Eagles earned a much-needed win in their earliest home opener in program history.