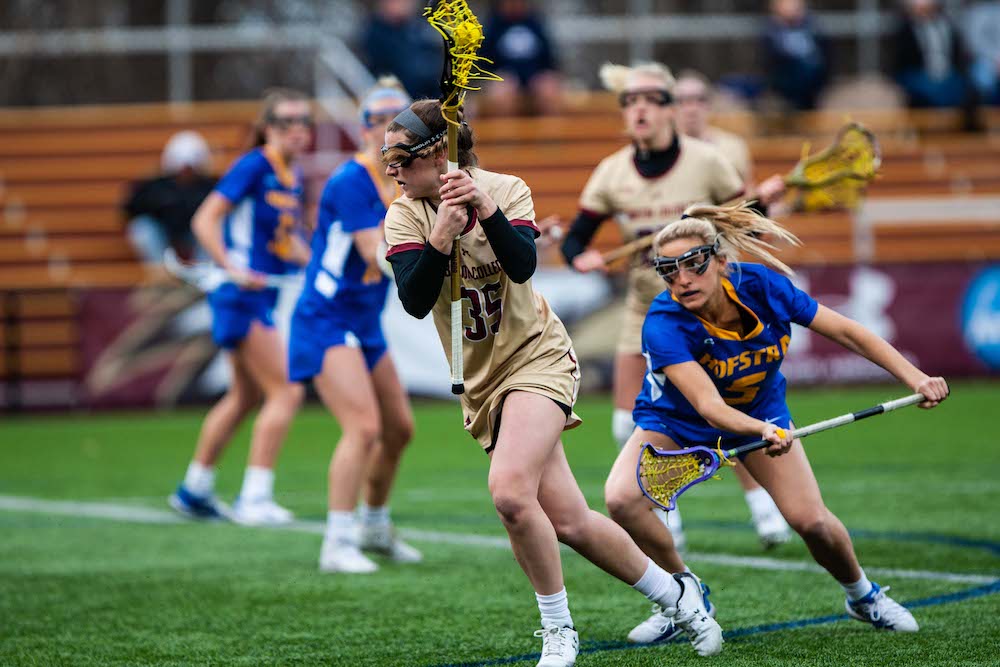 Boston College lacrosse entered its midweek non-conference home game against Hofstra having averaged just 9.7 goals over the course of its previous three contests. The Eagles—who ranked fourth nationally in scoring offense last season—had been struggling to keep pace with opponents, all while enduring turnover-filled scoring droughts.

BC jumpstarted the evening with a 7-0 run, rattling off all seven goals in the opening nine-and-a-half minutes of play. To put that in perspective, the Eagles hadn’t recorded more than six first-half goals in any game this season. Head coach Acacia Walker-Weinstein’s team closed the period with a 13-5 lead and, despite an 11-minute scoreless stretch at the start of the final frame, regrouped to find the back of the net seven more times and secure a 20-10 victory.

Hofstra (4-3) is no slouch, either. The Pride was coming off a five-goal loss to reigning national champion and No. 12 Maryland and, before that, a thrilling overtime win at Johns Hopkins. Hofstra had been especially dangerous inside the circle. In fact, the Pride came into the day ranked third in the country in draw control percentage (65.6 percent).

When Walker-Weinstein was asked if BC (4-3, 0-1 Atlantic Coast) had devoted time to faceoffs in preparation for Hofstra, the eighth-year Eagles head coach didn’t hesitate to answer.

Led by Charlotte North and Sheila Rietano, BC won seven of the game’s first 10 draws, allowing the Eagles to dominate time of possession. It also set the stage for their transition offense, which Walker-Weinstein said they rediscovered in the waning minutes of their 11-7 loss at No. 2 Notre Dame, where BC scored a trio of goals in the last 2:21 of regulation.

“I think we’re just kind of tired of not playing to our potential, and I think the girls were really excited to play today,” Walker-Weinstein said. “I think they had a little bit of an extra spark.”

North won the opening draw, and within 43 seconds, the Eagles were on the board. While trailing right, Jenn Medjid fired a pass to Cassidy Weeks, who slipped past Hofstra defender Jackie Gatti. From there, the redshirt freshman deposited a goal in the bottom right corner of the net—a spot that she attacked three times amid the Eagles’ 7-0 run, including twice in the initial four and a half minutes of the game, for her first BC hat trick.

Ryan Smith had a first of her own. The freshman, who notched two assists in her first six games, tallied the inaugural goal of her collegiate career. After being fouled, the Port Chester, N.Y. native snuck a near-post free-position shot inside the left pipe.

BC’s first seven shots were all on target, and the Eagles strung together three straight draws, paving the way for three goals in the span of 52 seconds. Smith kicked it off with her free-position shot, then Jenn Medjid followed, and Jordan Lappin—who logged three goals on the day—cashed in on a North assist to give BC a 5-0 lead.

Weeks capped her hat trick, and North faked a pass before rolling around the 8-meter mark and ripping a shot over her shoulder for the Eagles’ seventh goal of the game.

It wasn’t until the 20:18 mark that the Pride made a dent in the box score. Naturally, Alyssa Parrella, tied 10th nationally in goals per game, was the one to ignite the Hofstra offense. Following a Darcie Smith draw control, Parrella pushed the ball in transition, sprinted all the way into range, and whipped a shot past BC goalie Rachel Hall.

Parrella used a bounce shot inside the 8-meter mark to score Hofstra’s second goal, and five minutes later, Taylor Mennella muscled a shot into the back of the cage after going toe-to-toe with Eagles defender Morgan Tedeschi.

But the Pride was still down, 9-3, and BC wasn’t pumping the breaks any time soon. The Eagles racked up four more goals before intermission, including three in a row. Kate Taylor and Jordan Lappin both got past Jess Smith at the doorstep on the net—Lappin even threw three fakes in before sliding an underhand shot into the goal. Sandwiched in between those scoring plays was a Jenn Medjid goal, her second of five on the day.

Hofstra recorded two of the final three goals of the half, cutting its deficit to eight prior to the break and giving the Pride a sliver of hope. That comeback looked all the more possible 11 minutes in the second period.

In what started as a physical and turnover-prone half, BC suddenly could not generate any sort of offense. The Eagles’ 13-6 first-half advantage in the circle hardly carried over to the opening stages of the second period, and the teams combined for 10 fouls in the first 14 minutes of the stanza. Hofstra scored the first two goals of the half, and BC’s only two scoring plays of the first 19 minutes of the frame resulted from free-position attempts.

Katie Whelan, Arianna Esposito, and Erin Demek stitched together three crucial Pride goals that chipped away at BC’s lead, making it a 15-10 game. Hofstra was making the most of the Eagles’ turnovers, as well as a Weeks yellow card. Esposito’s goal, for instance, was a byproduct of the Pride being a player up, passing the ball around the BC cage 12-meter mark, and ultimately finding Esposito wide open in front of the crease.

Five goals was as close as Hofstra would get, though. BC’s defense cracked down, and in five minutes’ time, the Eagles’ attack finished what it started. Weeks pocketed her fourth goal, and then BC began working from behind the net.

“It’s the most dangerous place to attack on the field,” Walker-Weinstein said. “When all else fails, you’ve got to go from X.”

North, who piled up a season-high five assists, faked a wraparound and then lofted a pass to Medjid over the cage. In one motion, Medjid caught the ball and swiped down for the goal. The two replicated the scoring play shortly thereafter, and Urbank and Taylor concluded the offensive showcase with the final goals of the non-conference affair.

There were still flashes of sloppy play, and the second-half scoring drought proved to be a cause for concern, but there were moments where the Eagles were downright unstoppable—moments that fans of the program have become accustomed to watching in the last three years.

Heading into four consecutive ranked matchups, that’s exactly the kind of performance Walker-Weinstein and BC needed.