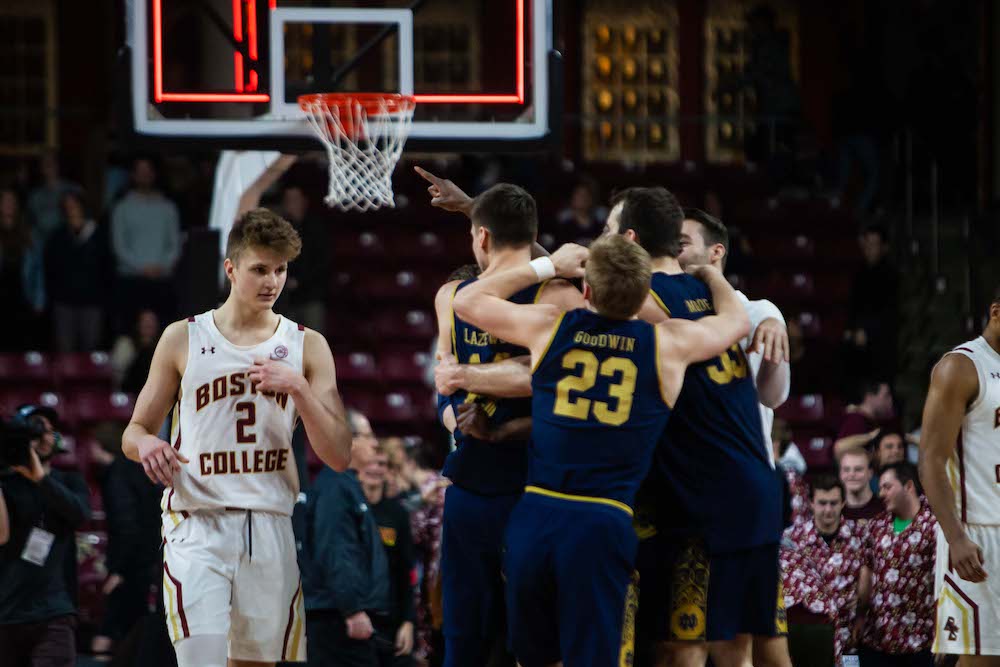 BC Drops First Game of ACC Tournament to Notre Dame

The road to the ACC tournament was rocky for Boston College men’s basketball. The Eagles had been plagued by injuries all season, with key pieces such as Jairus and Jared Hamilton, Nik Popovic, and Julian Rishwain each finding their names on the injured list. And with its difficult season still fresh heading into the first round of the tournament, BC had not been expected to make a deep run. But regardless of the outcome, the Eagles’ season was destined to come to an end, as the ACC would soon cancel the remainder of the tournament due to health and safety concerns.

The only hope for the Eagles was the memory of their previous contests against their opponent, No. 7 seed Notre Dame. Both of the teams’ games this season had been determined by a single point, with BC taking the first game in South Bend before the Fighting Irish beat the buzzer to defeat the Eagles in Chestnut Hill. And yet, the Eagles failed to remain competitive against Notre Dame, handing the Fighting Irish an easy 80-58 victory in the first round of the ACC tournament.

This loss would have been the final game for the Eagles regardless, but in light of the recent ACC and NCAA tournament cancelations, there will be no more college basketball for anyone this season.

Despite its recent struggles, BC has not been completely blown out by its opponents, with a 12.6 average margin of victory over the past five games. Those five games, including the Eagles’ loss to Notre Dame, were all losses against ACC opponents. But against the Fighting Irish, the Eagles’ last four contests posted a 2.8 average margin of victory, with BC coming away with only a single win.

As soon as the game began, however, the Eagles were clearly the inferior team. The Fighting Irish took a quick lead in the opening minutes of the first half and didn’t relinquish their advantage for the entire 40-minute matchup.

The Eagles trailed from tip-off to the final buzzer and the early minutes of the game set the tone for the rest of the matchup. It took BC just under five minutes to secure its first points with Steffon Mitchell and CJ Felder collectively going 3-for-4 from the free throw line to put the Eagles on the board. Jay Heath soon added a 3-pointer to the board, putting the Eagles within four points of the Fighting Irish, trailing 12-8 midway through the half.

But as the half continued, Notre Dame began to pull further away from BC, tallying an 18-3 run to put it up 30-12 with three minutes remaining in the half. The Fighting Irish had scored eight unanswered points against the Eagles before BC fought back with a 3-pointer by Kamari Williams. Notre Dame quickly reasserted its dominance, going on another 10-0 run while BC missed four shot attempts over the three-and-a-half minute period.

By the end of the first half, it was clear that BC was struggling. While they were only down 36-21 at halftime, the Eagles’ defense failed to stop the Fighting Irish’s relentless attacks. Not only was its defense falling behind, BC’s forwards struggled to score. Jairus led the Eagles with 10 points in the first half, but the next-highest scorer for BC was Jay Heath, who had only collected five points.

When it came down to it, the Eagles were only down by 15 points with a full half left to play. Greater deficits have been overcome. It wouldn’t have been impossible for BC to stage a comeback. But despite their season being on the line, the Eagles were unable to pull out the crucial win.

BC’s closest chance to come back in the second half came with 11:37 remaining in the game. The Eagles had fought to reduce Notre Dame’s lead to 10 points as Mitchell went to the line for one free throw attempt. Mitchell made it, cutting the deficit down to single digits for the first time since 6:26 left in the first half.

That, however, was also where the Eagles’ downfall began. Jairus Hamilton, who had been leading BC in points throughout the contest, left the game, leaving the Eagles to fill the gap that he had vacated. Mitchell stepped up, playing more aggressively as he tallied his eighth double-double of the season with 20 points and 13 rebounds.

But the Fighting Irish had built up their momentum with no chance of slowing down, working to extend their lead to 16 points over BC. And as the clock wound down on the final three minutes of the first-round matchup, the Fighting Irish went on a 12-6 run, sealing the Eagles’ fate and ending their season.