The announcement by the University administration Wednesday evening to move entirely to online classes and vacate campus premises by Sunday has not only disrupted everyday routines, but it has also dramatically altered the school’s arts scene. Performances that were slated to occur just days after the announcement were abruptly canceled. Plays and dance showcases that students have spent months rehearsing will never be given the spotlight. For the students who have put hours of work into these labors of love, disappointment is an understatement.

Boston College Dance Ensemble (BCDE) was planning to present its annual spring show Friday and Saturday nights. This year is an especially important one for the group: BCDE is celebrating its 40th anniversary, and to celebrate the occasion, it invited alumni members to attend the Saturday show after an alumni brunch event earlier in the day. The group was forced to cancel its weekend performances and brunch, but with some quick thinking, BCDE was able to salvage the show.

Since Robsham Theater was already reserved for a dress rehearsal Wednesday evening, the group invited those who were planning to attend the Friday and Saturday performances to come Wednesday instead, according to BCDE member Jordan Molgano, CSOM ’23. Although many of the dancers had family members who had booked plane tickets for Friday and Saturday and as a result couldn’t make it in time, alumni members who live in the Boston area came to give their support, and BCDE livestreamed the entire show through Facebook. Robsham employees volunteered to stay late to staff the theater.

“The entire team reached out to their friends, professors, family nearby, and we ended up filling Robsham with a cheering crowd,” said Molgano. “One of my professors said it was exactly what BC needed right now.”

Although a performance of the BCDE spring show managed to be squeezed in amid the chaos, ALC Showdown won’t be so lucky. The popular campus-wide dance competition, which was scheduled to be held on April 4, is canceled. BCDE joined a number of dance groups in an impromptu Showdown performance Thursday evening, but many of the groups only presented fragments of their routines.

“Showdown was something that I’ve been looking forward to since before deciding to come to BC,” Molgano said. “That was really heart-wrenching that we won’t be able to experience that until next year.”

In addition to the dance scene, theater has also been disrupted by the recent changes. Two plays, The Wolves and City of Angels, were recently canceled, to the disappointment of cast and crew members alike. The Wolves was set to premiere as early as next week. For assistant director of City of Angels, Ally Lardner, Lynch ’21, learning that her play would never be staged was a jarring transition and an unprecedented experience.

“We do shows, and they’re not forever,” Lardner said. “That’s the best thing with every piece of theatre that you do. You do a thing and then it’s over, the show closes, and you move onto the next one. It’s just City of Angels and The Wolves feels very different.”

With City of Angels set to debut at the end of April, it was hard for Lardner to come to terms with the reality of the situation.

“It was a really difficult show design-wise,” Lardner said. “There are a lot of adults and the stage manager and myself who put a lot of time into prepping, and then to have all of that taken away with all of us knowing what our plan was, what the potential was, how beautiful it could have been—and it’s just not going to happen.”

Beyond theatre, Lardner is also involved with Arts Fest, yet another event that won’t come to fruition this year. The multi-day festival is an opportunity for art forms of every kind to shine, from chamber music to improv comedy. Arts Fest is the crown jewel of the year, a celebration of BC’s under-recognized cultural cachet.

The show must go on, as the saying goes. But this year, it might just have to wait. 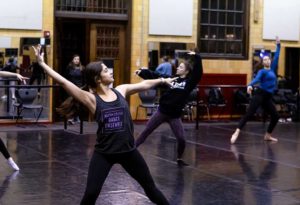