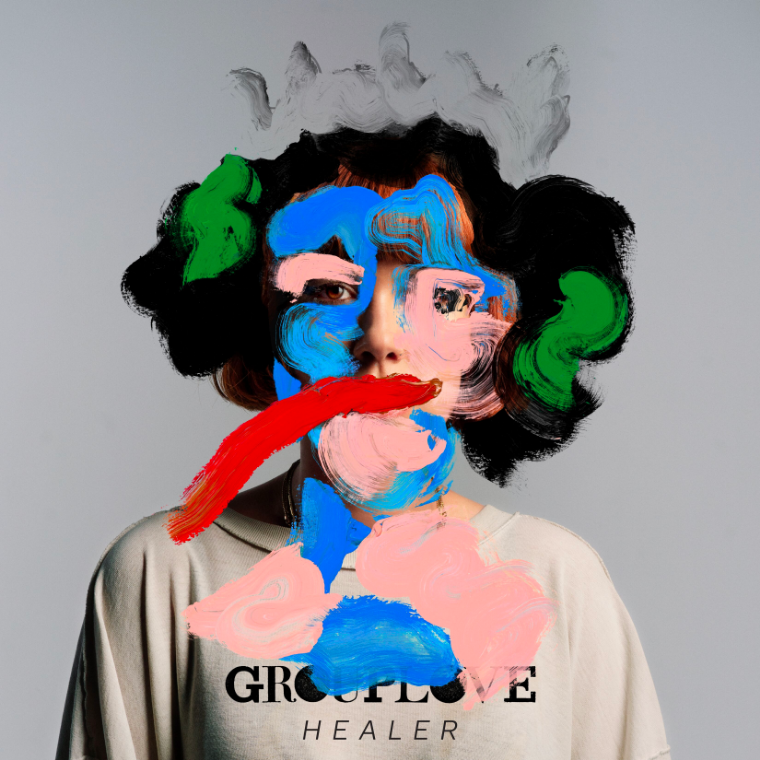 There’s something special about indie rock outfit Grouplove’s song “Tongue Tied.” Beloved by many, it’s one of the best distillations of the soaring emotions of youth by any indie band in recent memory. It’s energetic, stirring, and upbeat, yet there is a deep-seated melancholy in the repeated entreaty “don’t leave me tongue tied.” The song is a near-perfect encapsulation of the hard-to-pin-down feeling of nostalgia.

“Tongue Tied” is the definitive crown jewel in Grouplove’s otherwise fairly par-for-the-course catalogue. Yet with its newest album Healer, the group soars closer to the great heights of “Tongue Tied” than it has in nearly 10 years.

The album’s title refers to a recovery, not only of the band’s creative output, but a recovery of a more personal nature. While speaking with Apple Music, vocalist and keyboardist Hannah Hooper discussed her experience undergoing brain surgery.

“I also realized that having such a scary thing, people started opening up to me … and that’s really where Healer came from, using our art for us personally to heal and getting closer to each other, but also realizing that everyone is in a place where there’s some healing needed,” Hooper said.

The sound of the record features upbeat, pulsing guitar strumming alongside loud percussion and swirling choral melodies, standard fare for the group and the indie genre as a whole. Yet with the addition of Dave Sitek of TV on the Radio as a producer, the group isn’t afraid of innovation. The album features a wide range of synthesizers and electronic instrumentation. The quick pace creates a sense of urgency and perseverance throughout the album despite the large-scale issues the band grapples with.

The first two songs, “Deleter” and “Inside Out,” see Grouplove exhibit this tenacious attitude right off the bat. Someone chants “One, two, three, go” at the beginning of “Deleter” before guitarists Christian Zucconi and Andrew Wessen and drummer Benjamin Homola join in. In the chorus, Grouplove chants, “All this time I thought you were a leader, it turns out you’re only a deleter / Tell your friends that you’re okay / You’re never gonna see them anyway.” The lyrics dismiss the negativity of this “deleter,” calling for people to remain optimistic in the face of obstacles.

Elsewhere in the song, the concept of overcoming adversity is present in lyrics such as “And how we built a lighthouse / Out of all these godforsaken ruins” and “All this time I’m burning with a fever / It turns out I’ve always been my healer.” The old adage “When life gives you lemons, make lemonade” courses through in this song and many others on the album, advice that is perhaps much needed given the current state of the world.

The following track “Inside Out” is easily the best on the album. The first echoing “yeah” that resonantly sounds in the beginning and during the choruses is almost identical to those heard in “Tongue Tied.” The angelic vocal harmonies and soulful guitar melodies that surface in the chorus are part and parcel of Grouplove’s sound and bring the band’s strengths to the forefront.

“Inside Out” also features phenomenal dynamics and song structure, other strengths of the group. It builds from a verse into the chorus and repeats this pattern before quieting down to the bridge. Grouplove softly whispers “Baby / You’re making me crazy / You got the only thing goin’ / That I know’s worth waitin’ for” in the bridge before moving triumphantly into a soaring finish, repeating the chorus with swelling guitars and synths. It is this mastery of the build up that gives Grouplove’s best work its arena-rock expansiveness and appeal.

Other highlights include “The Great Unknown,” whose uncertain look at the future is solemn yet ultimately comforting, especially with the chorus of “E-I, E-I, E-i-O-O / We are, we are, on our own / You-I, me-I, she-I must go / Into the great unknown.” The excitement and fear that accompanies feeling overwhelmed is perfectly captured here. It brings to mind fellow indie anthem “Take a Walk” by Passion Pit, whose protagonist also feels adrift and uncertain of the future.

“Ahead of Myself” and “Burial” also deliver mixed feelings of concern and hope for the future and are solid additions near the end of the tracklist. The welcome surprise of the record, however, comes with the final track “This is Everything,” a track that burns slowly as opposed to the wildfire intensity of many of Grouplove’s anthems. Over guitar melodies with heavy reverb and lagging, labored percussion, Grouplove commiserates, singing together, “Oh, this is even more than I asked for / This is even more than I planned on / This is even more than I wanted.”

In an uncertain future amid environmental, political, and social concerns, Grouplove remains hopeful across these 11 tracks. The band is nostalgic about the seemingly golden years of youth, yet still anxiously awaits what the future holds.

Nathan is the assistant arts editor for The Heights. He is a turtleneck enthusiast and believes jeans are far and away the most versatile clothing item. He just got back on the grid and you can follow him on Twitter @NathanRhind24.